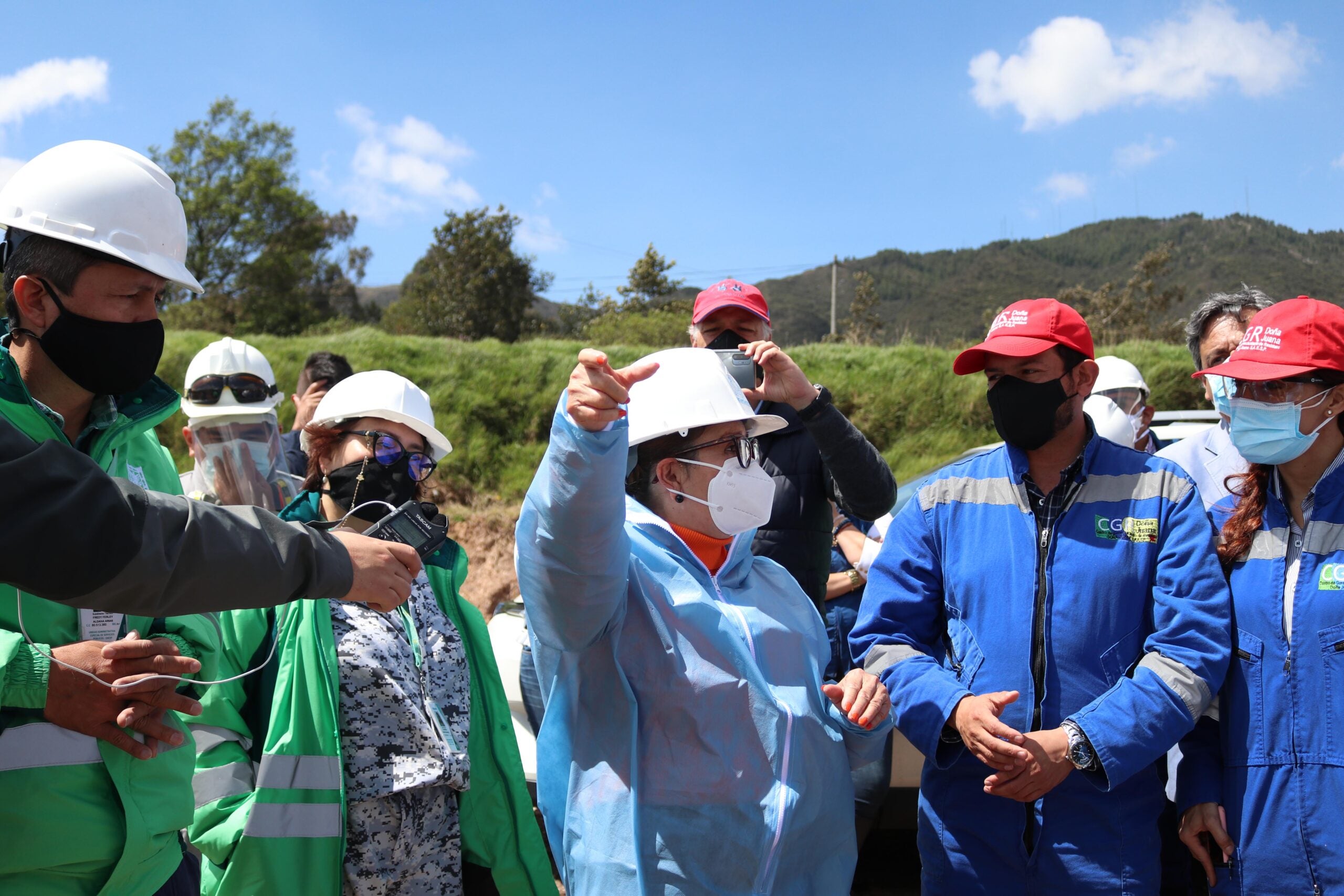 Nelly Villamizar, magistrate of the Bogotá River, is overseeing efforts to clean up the highly polluted waterway. (Photo by Genevieve Glatsky)

On a sunny morning last December, Nelly Villamizar arrived at the Doña Juana Landfill on the southern edge of Bogotá, Colombia. She was quickly surrounded by an entourage of landfill employees hanging on her every word. She was there for a legal inspection to evaluate if the site was complying with a legal mandate calling for the decontamination of the Bogotá River.

As the city has grown, its government has not developed adequate plans to deal with increasing amounts of waste and sewage. As a result, most of it ends up in the 375km river. Villamizar is in charge of verifying that entities like the landfill don’t exceed the legal restrictions on discharges that flow into the waterway. It’s an essential service, but a relatively new one.

Once a sacred tributary for Colombia’s indigenous Muisca tribe, the waterway today is a noxious eyesore filled with industrial and residential waste from the roughly 11 million residents of Bogotá and the surrounding 46 municipalities of the river basin. Since the city’s accelerated population growth of the mid-1950s, the country’s capital has sent hundreds of tonnes of industrial, agricultural and residential waste flowing into one of its most important water sources. It now receives about 690 tonnes of pollutants daily.

The Bogotá River received a hopeful sign in 2004 when Villamizar, then a judge, ruled in favour of a group of citizens who had filed a lawsuit on behalf of their municipality, which was heavily impacted by the waterway’s contamination. Her ruling, which called for the decontamination of the river, was controversial and was quickly appealed.

Is buying a football club a good investment?

For ten years, as her judicial decision remained stuck in the courts and the river continued to be polluted, Villamizar learned more about the problems facing the tributary and became more passionate about its recovery. Finally, in 2014, the Council of State, Colombia’s highest court of administrative law, upheld her ruling calling for 62 governmental entities across 46 municipalities to take various measures, including controlling waste water discharges, regulating agricultural practices and monitoring garbage dumping.

To enforce compliance, the council appointed Villamizar to the newly created position of magistrate of the Bogotá River, a role that enables her to order a legal inspection at any time, at any relevant entity, to ensure that they are complying with the ruling. Villamizar, 65 years old with a slight frame and a brisk and lively demeanour, has become known as “the mother of the Bogotá River”.

An arsenal of tactics to fight pollution – and corruption

“They always had a justification that ‘I’m not responsible because I’m not the one who’s polluting, it’s the others who are polluting’,” she explains. “Nobody here was paying attention until I arrived.”

People are paying attention now. Across the city, various actors are employing an arsenal of tactics – treatment plants, surveillance systems, private-sector investment, judicial activism, massive reforestation projects and community awareness – to try to decontaminate the waterway. The hope is to fulfil the residents’ long-standing dream of returning its crystal-clear waters and improving the social and economic development of the struggling river basin communities in the process. Rendering of the planned expansion of the El Salitre Wastewater Treatment Plant, a critical project aimed at improving the sanitation system of Bogotá and its environment. (Courtesy of Aqualia)

The expansion of the Salitre Wastewater Treatment Plant is expected to treat 30% of the waste water generated by the northern and central parts of the city, for example. The Canoas waste-to-energy facility in the south of the city plans to treat the other 70% city’s waste and produce 8% of the country’s energy by 2027.

They always had a justification that ‘I’m not responsible because I’m not the one who’s polluting, it’s the others who are polluting.’ Nelly Villamizar, magistrate of the Bogotá River

Amaury Rodríguez, director of the Fund for Environmental Investments of the Bogotá River, says the goal is to have treatment plants built in all 46 municipalities, in addition to the two megaprojects in Bogotá.

“It will not solve 100% the recovery of the Bogotá River. It is a medium and long-term process,” says Rodriguez. “But the operation of these two treatment plants will undoubtedly have a positive impact on the river in terms of quality. And this will make other sources of pollution even more visible and will generate greater pressure to begin to solve it even faster.”

The Bogotá River Group, an initiative that includes the Salitre Wastewater Treatment Plant, Coca-Cola, Banco de Bogotá and the sustainability non-profit Fundación Semana, seeks to raise public awareness about the importance of keeping the waterway clean and make it a national priority.

This alliance also includes 40 mayors in the Bogotá River basin, many of whom have plans to build their own, smaller treatment plants, update their water and sewage systems, and conduct reforestation projects to help decontaminate the water. But this group of mayors has publicly complained that the federal government has not responded to their pleas for funding, making it impossible to carry out the terms of the sentence, and instead has granted mining licences on protected wetlands and other areas in the river basin.

One of those mayors is Nelson Javier Torres Romero, who governs Villapinzón, a municipality of 20,000 inhabitants 80km north-east of Bogotá, where the mouth of the river is located. His municipality is the only one in the basin that doesn’t have any waste water treatment. So the domestic waste of the roughly 5,500 inhabitants who live in the town’s urban centre ends up in the Bogotá River.

Bogotá’s biggest challenges of decontaminating the waterway go beyond structural deficiencies in the city’s water and sewage system. Villamizar points to the city’s continued unrestricted growth without corresponding environmental regulations.

Pablo Carrizosa, president of the Association of Users of Renewable Natural Resources and Environmental Defense of the Bogotá River Basin, or Asurío, attributes the watercourse’s deteriorated status to a lack of civic engagement and environmental awareness.

“The fact that the Bogotá River is how it is shows our culture a little bit what we Colombians are,” says Carrizosa. “If we were judicious types that don’t cheat [and are] ethical in what we do, well, the river would be perfect.”

A new monitoring system comprising 14 nodes along 100km of the Bogotá River, each with solar-powered thermal-imaging cameras, attempts to address this by tracking crimes like illegal dumping, fires, drug use and cattle grazing. But more sustainable changes to citizen behaviour will require deeper engagement on the part of the government, says Jaime Avellanada, a member of Asurío and owner of a forest reserve north-east of Bogotá. He has done just that, working to ensure that the invasive species of fish in his hatchery don’t enter the waterway, measuring levels of contamination in land wells and fencing in his livestock so they don’t destroy the native forest. But implementing such environmentally friendly practices hasn’t been easy.

“We have had good results, but it has been a very hard job, because let’s say we haven’t had the best support from Bogotá,” says Avellanada. “We’ve really had to do it alone.”

The branches of government that deal with livestock, forest conservation and river decontamination do not communicate with one another, he explains. Environmental projects are often implemented by third-party organisations that are unfamiliar with the communities and are under pressure to show enormous results with a limited budget.

Villamizar says that while she sees encouraging efforts on the part of municipal and local governments, she hasn’t received support from the federal government for extra staff members to help her conduct her work as she has requested. She does see progress happening – but slowly.

“We are improving many things,” she says, “that for years were mishandled.”

Genevieve Glatsky is journalist based in BogotÃ¡, focusing on the environment and human rights.
Websites in our network