Many urban highways built in the 1950s and 1960s were deliberately run through neighbourhoods occupied by black families and other people of colour, walling these communities off from jobs and opportunity. Although President Joe Biden proposed $20bn for reconnecting neighbourhoods isolated by historical federal highway construction, the bill currently provides only $1bn for these efforts – enough to help just a few places.

As scholars in urban planning and public policy, we are interested in how urban planning has been used to classify, segregate and compromise people’s opportunities based on race. In our view, more support for highway removal and related improvements in marginalised neighbourhoods is essential.

As we see it, this funding represents a down payment on restorative justice: remedying deliberate discriminatory policies that created polluted and transit-poor neighbourhoods like West Bellfort in Houston, Westside in San Antonio and West Oakland, California.

Freeway construction has devastated minority neighbourhoods in cities across the US.

Many policies have combined over time to isolate urban black neighbourhoods. Racialised rental and sales covenants began appearing in US cities in the early 1900s. They changed cityscapes by restricting certain neighbourhoods to whites only, which concentrated black people in other areas. Racialised zoning, outlawed by the Supreme Court in 1917, was followed by single-family or exclusionary zoning, which restricted residents by socio-economic class – a proxy for race in the US.

Next came redlining, a classification process that started in 1933 when the federal government rated neighbourhoods for its loan programmes. Working with real estate agents, the federal Home Owners Loan Corp created colour-coded neighbourhood maps to inform decisions by mortgage lenders at the Federal Housing Administration.

Any neighbourhood with substantial numbers of black residents was coloured red, for “hazardous” – the riskiest category. Other New Deal programmes, such as the Federal Housing Authority and Fannie Mae, built on redlining by requiring racially restrictive covenants before approving mortgages. 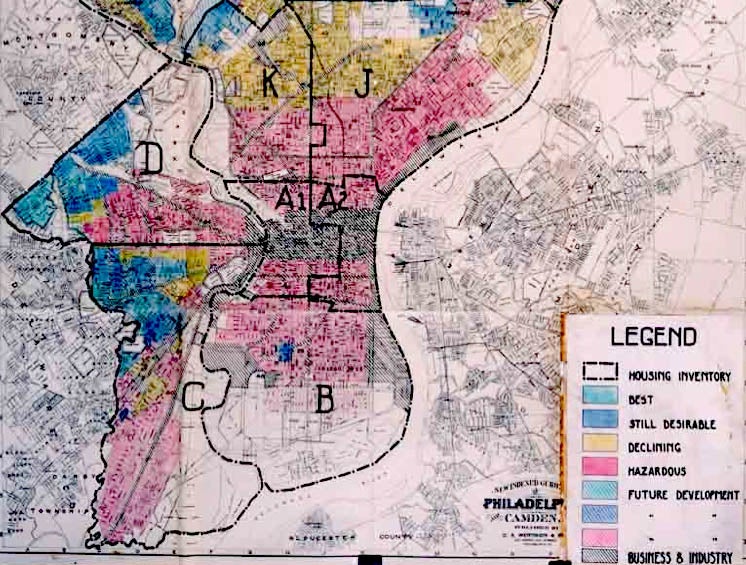 Beginning with the first federal highway law in 1956, transportation planners used highways to isolate or destroy black neighbourhoods by cutting them off from adjoining areas. Once the highways were built, the social and economic fabric of these neighbourhoods began to deteriorate. Distinguished environmental justice scholar Robert Bullard calls this transportation racism, alluding to the way in which isolation limited employment and other opportunities.

The lasting impacts of highway construction

Today low-income and minority neighbourhoods in many US cities have much higher levels of fine particulate air pollution than adjoining areas. Across the US, black and Latino communities are exposed to 56% and 63% more particulate matter, respectively, from cars, trucks and buses than white residents.

Decades of work by environmental justice activists and academics have shown these neighbourhoods also are much more likely to be chosen as sites for polluting industrial facilities like incinerators and power plants.

One outcome is that life expectancy in the nation’s cities is compromised, varying considerably between the lowest and highest-income ZIP codes. The worst cities have gaps as high as 30 years.

As one example, Delmar Boulevard in St. Louis is a socio-economic and racial dividing line. North of Delmar, 99% of residents are black. South of Delmar, 73% are white. Only 10% of residents to the north have a bachelor’s degree, and people who live in this zone are more likely to have heart disease or cancer. In 2014, these disparities led Harvard University researchers, based on their work on the “Delmar Divide”, to conclude that ZIP code is a better predictor of health than genetic code.

Transportation investments in the US have historically focused on highways at the expense of public transportation. This disparity reduces opportunities for black, Hispanic and low-income city residents, who are three to six times more likely to use public transit than white residents. Only 31% of federal transit capital funds are spent on bus transit, even though buses represent around 48% of trips.

Many highways built in the 1950s are now deteriorating. At least 28 cities have begun or are planning to partly or fully remove highways that have isolated black neighbourhoods rather than rebuilding them.

Cities began removing expressways, particularly elevated ones, in the 1970s. While these teardowns were mostly to promote downtown development, more recent projects aimed to reconnect isolated neighbourhoods to the rest of the city.

For example, in 2014 Rochester, New York, buried nearly a mile of the Inner Loop East, which served as a moat isolating the city’s downtown. Since then, the city has reconnected streets that were divided by the highway, making the neighbourhood whole again.

Walking and biking in the neighbourhood have increased by 50% and 60%, respectively. Now developers are building commercial space and 534 new housing units, more than half of which will be considered affordable. The $22m in public funds that supported the project generated $229m in economic development.

Other cities that have removed or are removing highways dividing black neighbourhoods include Cincinnati, Chattanooga, Detroit, Houston, Miami, New Orleans and St. Paul. There are only a few well-documented case studies of freeway removal, so it is too early to identify factors leading to success. However, the trend is growing.

In our view, combining highway removal with significant investments to improve bus networks that serve these neighbourhoods would significantly improve access to jobs, housing and healthy food. Removing highways would also open up land for new green spaces that can improve air quality and provide cooling. However, we are also mindful that green amenities can cause environmental gentrification in these communities if they are not accompanied by robust support for affordable housing.

Simply removing highways won’t transform historically disadvantaged neighbourhoods. But it can be a key element of equitable urban planning, along with housing stabilization and affordability, carefully planned new green spaces and transit improvements. For an administration that has pledged to prioritize racial and environmental justice, removing divisive highways is a good place to start.

Professor of Urban and Environmental Policy and Planning, Tufts University.
Websites in our network