Lipika Bhattacharya picked up cycling last summer, but she never had the courage to take her bicycle out for work. Her typical outing was limited to a spin in the neighbourhood. But this year, after the Covid-19 lockdown was eased partially in May, Kolkata’s streets seemed far less threatening and there was no worry of being fined, so the 48-year-old, who works as a special educator at a child psychiatric centre, ventured out on the road for the first time.

“That first bumpy, wobbly ride was one of the most liberating experiences of my life,” recalls Bhattacharya. 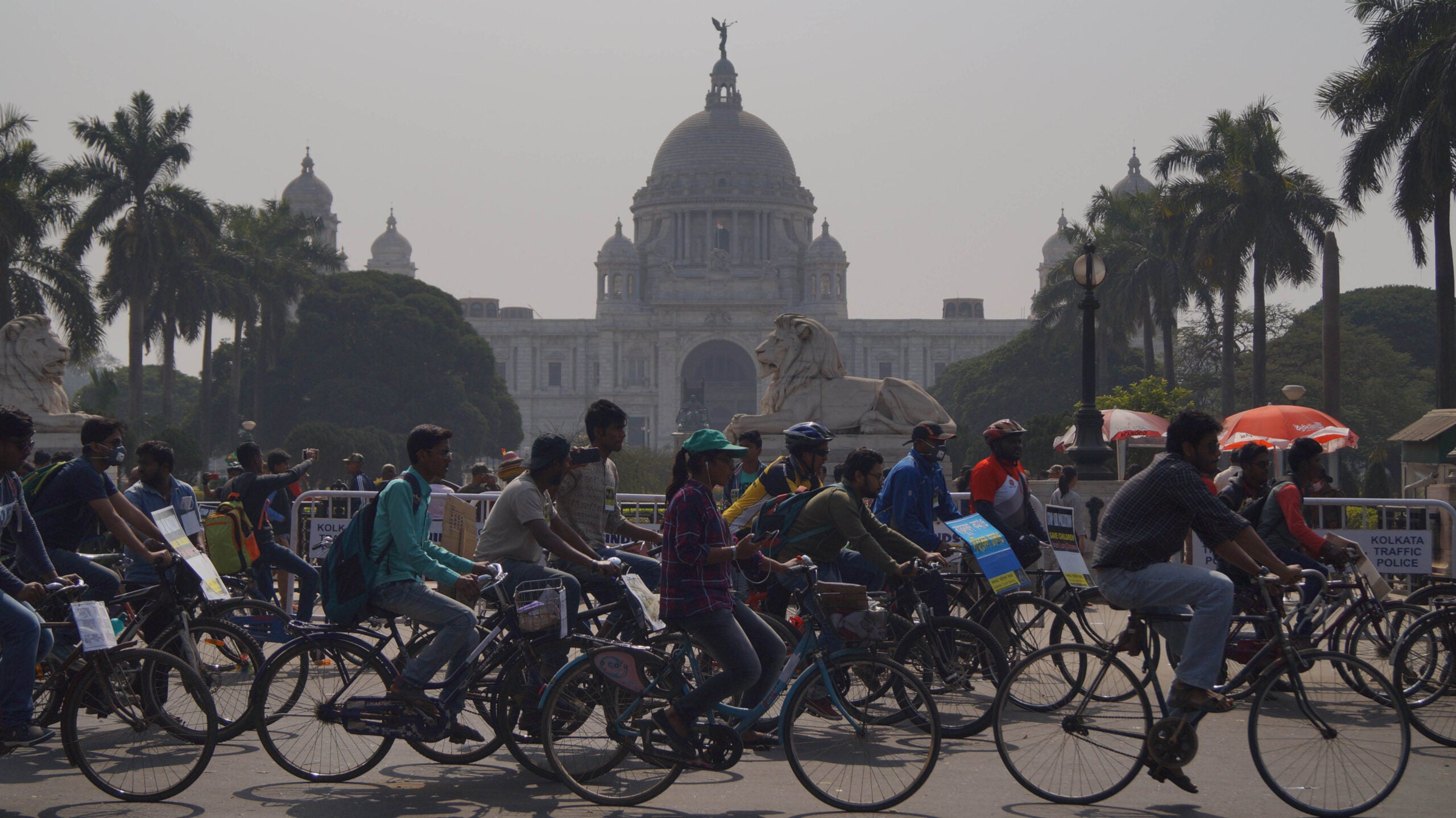 Bhattacharya is one of hundreds of people who have picked up the bicycle as a safer mode of commuting due to Covid-19. And Kolkata, one of India’s largest cities, with a population of over 4.5 million (over 14 million in the metropolitan area), is likely to become a more cycle-friendly locale – a dramatic shift given the fact that before the pandemic, cycling was banned on 22 streets, including a majority of the main thoroughfares, and was allowed only between 11pm and 7am on 40 other streets. The police have been insisting since 2008 that bikes, and bike lanes in particular, eat up space on the city’s already-narrow roads and affect vehicular movement.

The pandemic has changed this, albeit temporarily. In June, there was a notification from the police that cycling would be allowed in the non-arterial roads till further notice. There have been subsequent notifications to the same effect, and the last one expires on 31 October. Activists who have been campaigning for the environment-friendly mode of transportation in one of the most polluted cities in the world have reasons to hope there is a long-term change in the offing.

Kolkata's cycling ban is overturned – at least for now

India imposed a stringent countrywide lockdown on 24 March. Since then, there has been a gradual process of reopening institutions and public transport. Limitations are still in place, and fear is pervasive. Though schools and colleges remain mostly closed and office work is being done from home, some state governments are gradually allowing public transport like metropolitan trains to resume with strict protocols in place. This situation, as it has in many parts of the world, has given cycling a boost. A survey conducted in May by the Institute for Transportation and Development Policy (ITDP), a New York-based NGO that promotes public transport, shows a 50% to 65% increase in cycling in Indian cities after the lockdown, especially for work trips. In Kolkata, too, bicycle stores like Santi Cycle Mart or Ghosh Brothers have seen a rise of around 50% in sales from July.

“It is the perfect time for a final push to see effective change. More people are coming out with their cycles than we have ever seen, and there is a sharp rise in environment concerns, too,” says Satanjib Gupta, who is known as the bicycle mayor of Kolkata and works with BYCS, an Amsterdam-based international enterprise to promote cycling.

In response to the surge in interest, the central government’s housing and urban-affairs ministry in July launched the India Cycles4Change Challenge in association with the ITDP India Programme to support Indian municipalities to implement cycling-friendly initiatives in response to Covid-19. Cities are charged with deploying quick strategies like introducing cycle lanes, slow zones or neighbourhood training centres to encourage cycling and submit a proposal by 14 October. The shortlisted locales will then submit their implementation report by May 2021. Kolkata has taken up the challenge along with implementing a long-standing National Green Tribunal directive to start cycling lanes in the city.

But in September, the feasibility of this plan met with apprehension from the traffic police department, which had put the restriction on cycles in 2008 to remove “slow-moving vehicles” from 38 major roads and then expanded it to 62 roads by 2015. According to the traffic police, cycles had slowed down automobiles, increasing congestion and causing accidents.

To prepare a new plan for a cycling network, a joint committee comprising an urban planner, an environmentalist, members from the Kolkata Metropolitan Development Authority and a member from the police department will meet to determine the best next steps.

“While relaxing laws during the pandemic is a good idea, it can be counterproductive if the restrictions are lifted without proper infrastructure in place. This can lead to accidents and we will be back to where we were,” says Bhargab Maitra, a professor of civil engineering at the Indian Institute of Technology Kharagpur, who specialises in transportation planning and is a part of the joint committee.

Maitra says that the administration needs to consider other options for parking cars, such as designated zones or vertical parking instead of parking on the sides of roads. This can then open up space for cycling lanes. “We need to ensure that the cycle network eventually connects all ends of the city to serve the purpose of commute,” he says. 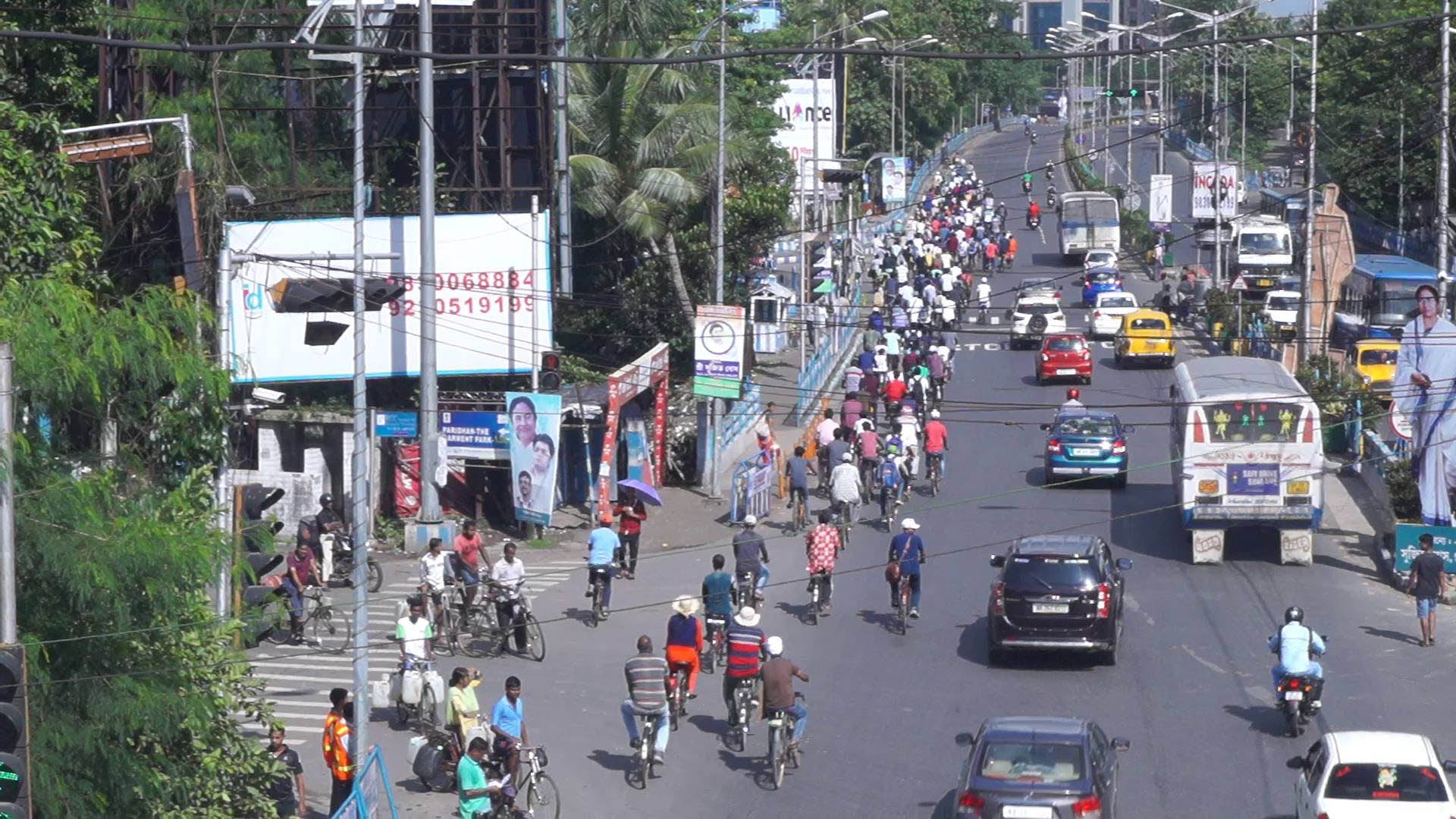 The traffic police and cycling advocates are at odds over how best to use roads. (Photo by Shiladitya Sinha)

Shreya Gadepalli, south Asia director of the ITDP, believes that a sensible cycling policy can be the solution for congestion rather than its cause. “A car occupies more space than a cycle, so a policy that incentivises cycling and puts a check on personal automobiles actually can decongest a city,” she says.

Though the outcome of these policy meetings in Kolkata is yet to take shape, for cyclists like Bhattacharya, the change has already happened. “I can’t imagine going back to the old restrictions again, she says. “It is just a ride, but it makes me less guilty about my carbon footprint and more aware of the city we pass through every day.”

Dipanjan Sinha is an independent journalist from India.

Topics in this article: Congestion