In the wake of the police killing of George Floyd, American cities are grappling with the role of law enforcement as never before. Calls to “defund the police” are heard from protests across the country, especially as an increasingly bleak fiscal situation forces dramatic cuts across municipal budgets. 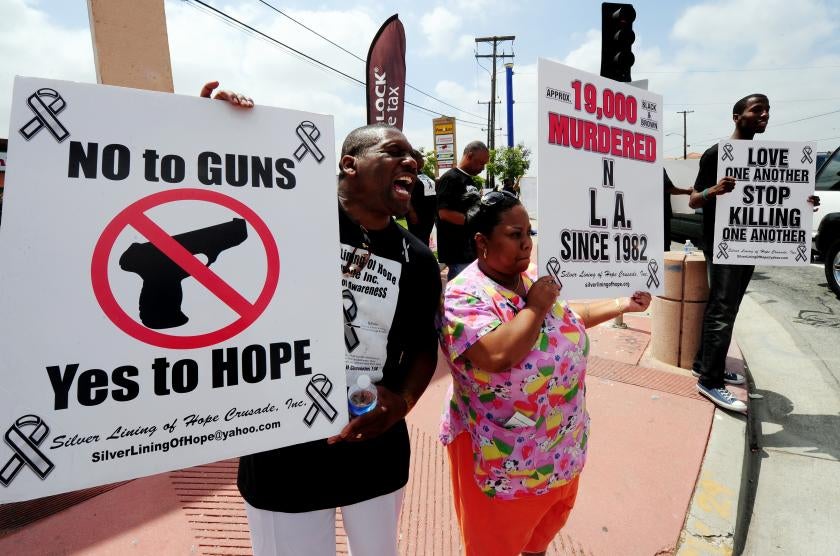 As the United States reconsiders the role of the police, policymakers would do well to read Ghettoside: A True Story of Murder in America, by former Los Angeles Times crime reporter Jill Leovy. This 2015 book highlights a bleak irony of U.S. cities, which Leovy witnessed up close: Black communities are simultaneously under- and over-policed.

As Leovy notes, Black men represent 40% of America’s homicide victims but only 6% of its total population. The United States government has functionally failed to extend state protection equally to all of its citizens. This cardinal failure of the criminal justice system, and American governance generally, means that residents turn to alternative forms of justice. Mixed with an abundance of firearms, the result is a plague of violence.

“Like the schoolyard bully, our criminal justice system harasses people on small pretexts but is exposed as a coward before murder,” writes Leovy.  “It hauls masses of Black men through its machinery but fails to protect them from bodily injury and death. It is at once oppressive and inadequate.”

[Also on City Monitor: ‘They rely on you being intimidated’: Local elected officials in the US describe how police unions bully them]

Ghettoside was published amid the first wave of the Black Lives Matter movement, at the beginning of our current reckoning with policing in America. As the movement picks up again five years later, City Monitor spoke with Leovy about the American state’s failed monopoly of violence and why cash assistance should be a part of the answer.

Your book is about how American police have failed to deliver, especially for Black Americans. I want to start by asking you to describe the central argument of Ghettoside. How can Black communities be simultaneously over- and under-policed?

I can remember the moment when I crafted that sentence in the book about over enforcement and under enforcement. I was reading Josh Sides’s history of African Americans in Los Angeles and he was summing up the nature of complaints in the early 20th century, which was always either that policing was inadequate or overzealous. I remember reading that sentence over and over and it suddenly hit me that those things are not mutually exclusive. In fact, they’re complementary. A lot of historical reading helped me refine that idea, that the severity of punishment and lack of control are actually things that go together.

Violence is very difficult to mount an enforcement response to. It’s expensive, it requires lots of institutional chops, lots of different elements of the system have to come together. It is difficult because it is all about process and, in some ways, the public never quite sees or appreciates that. But what you’re looking for is not an outcome, what you’re looking for is a process that works.

When I’m trying to keep it simple, I say violence is the keystone of an arch. If you are building law, enforcement of violence is right at the centre. There’s not a lot of violence. It’s a marginal area of police activity to investigate these crimes. But if you don’t do it, if you let the violence get away from you, and there’s no state response to violent actors, then everything else is tainted by that. It undermines the whole structure.

Murder rates in Black communities have been higher than in white neighbourhoods since homicide rates were measured. How is that tied into this larger picture of systemic racism and white supremacy?

I think the post-Civil War period really matters. The kind of homicide pattern that emerged out of the Civil War, and the decades afterwards, looks a lot like the environments of insurgency and sectarian violence that simmer for long periods after civil wars in other places in the world. It is a very typical high-homicide environment, with a divided state and an unresolved political schism.

Baghdad in 2005 is very similar, in some ways, to reconstruction in the South. The post-Civil War environment is a homicide machine. That’s somewhat distant history, although not that distant. I met people in the ’90s, when I was reporting in South Los Angeles, who actually were part of the rough edge of the sharecropping system when they were children in the South. It’s not that far away.

Then I think residential segregation is central to all this. It takes away something that might have changed things for a lot of Black Americans: mobility. That’s something more affluent people use all the time. That’s what suburbs are. Suburbs are moving away from the neighbourhood you don’t want to be in, moving away from crime. Suburbanization has been so successful for some people in the U.S. that they can’t even relate to having homicides in the neighbourhood, or even a lot of police.

Your research about the Jim Crow South was really telling. The state would come down really hard on Black men for theft, vagrancy or other minor crimes. But then if they killed another Black man, it basically wasn’t investigated. Still, you reference Gunnar Myrdal’s study of Black life in the Jim Crow South, and note that he found Black communities even in that context said they wanted more police presence to protect them from violent crime. Essentially, they wanted the kind of police presence white people could expect in their neighbourhoods.

The point is it’s a criminal justice system that completely lacks any legitimacy for a lot of people. Then they came to Los Angeles in the ’50s and ’60s. The question is what was done to create legitimacy then? I don’t think you can find answers in the places that matter, like responding to the murders of Black men.

It’s not necessarily for the same reasons as the Jim Crow South. One of the things that happens late in the 20th century is police departments are just completely overwhelmed, the courts are overwhelmed. The system was so overwhelmed and so inadequate against that tidal wave of violence in the late ’80s and ’90s, that there were actually murder cases filed in which the victims weren’t dead. They lost track of things to that extent, that is how dysfunctional that system was.

Another idea in Ghettoside is the idea of proactive versus reactive policing. Even today there’s this idea that proactive is better than reactive. I think it came from the public health movements that were evolving at the same time that police were developing in the U.S. But crime is not like germs. Being proactive does not have the same effect. You’re talking about human beings, committing acts. Instead, it’s very important that the weight of the system be reactive, responding to what has happened in the real world and not what you’ve guessed might happen.

What it does when you’re effectively reactive is that the system is responding to people being hurt and killed. You get pretty broad support from the public when you’re investigating a murder. Not necessarily cooperation, but the idea of it makes sense to a lot of people. That is a much stronger foundation to build law on than saying, “well, you looked like you were up to something, that’s why I patted you down.”

If policy makers were to refocus law enforcement on solving murders, what would that look like? Do we know how to increase clearance rates? And are there any changes that can be made beyond reducing the workload of each homicide detective, so they have more time to focus on each particular case?

There’s a lot of problems here, but one of [the answers is that detectives should have] five cases a year and not 10 or 20. Then witnesses are hugely, hugely important. There’s not a lot of focus on them, there aren’t a lot of academic studies. But people are extremely afraid to testify, which I think is quite understandable, and that should be looked at more.

As with all policing, who you choose to do the job and their qualifications are very, very important. But the pressure on the other side is you don’t want excessive zeal, because there is constitutional due process. You want to get the right people and you want good cases that are clean and legal. You never want to say to detectives, “you gotta solve all your cases this year.” That’s how you get another whole set of problems.

What do you make of the current call to defund the police?

I certainly hope that crime victims are seated in the process. They are a stakeholder group that does not have a loud voice. People think they do because there’s this offshoot “victims rights” movement that crops up from time to time. But really, people who live in the kind of police divisions that I covered – whose sons, brothers and husbands were shot – they were not very present at the city-level debates about the police department. But those people who are hurt by crimes suffer a lot. They suffer and suffer and I hope they’re not forgotten. Any alternative should take their suffering into account.

There’s a really interesting part at the end of your book where you write about seeing the greater availability of cash benefits in the form of the Supplemental Security Income program, which was tweaked in 2005 to help recently released prisoners gain access to it, allowing some low-income single men to get cash aid. You argue that social welfare systems of that nature are a means for the state to intervene in a way that liberates people, at least to some extent, from the underground economy.

That’s a huge part of my thinking and a huge part of what Ghettoside is getting at. I think that autonomy is very important. And I think one of the unseen tragedies of American life is the way that some men are coerced and trapped into criminality that they don’t have a strong inclination to be part of. It’s life-ruining, of course.

The year I wrote the Homicide Report blog for the L.A. Times, I had at least two teenagers who were murdered because they refused to join local gangs in their neighbourhood. There’s a kind of desperation that forces people to seek recourse in informal horizontal economic relations. In the 77th Division, where I was, single men who didn’t have dependents didn’t get any welfare. They had no money. Especially people out of prison, they didn’t have jobs, they were desperate to survive. They didn’t have places to live, they were staying with people and couch hopping.

That is not a situation that’s going to work against the forces of the underground economy. It’s a situation that encourages people to clique up horizontally. And it encourages disputes. On a practical level, I think that if people were more autonomous and had to rely less on cliquing up or forging economic ties horizontally, that it would result in fewer disputes and less crime.