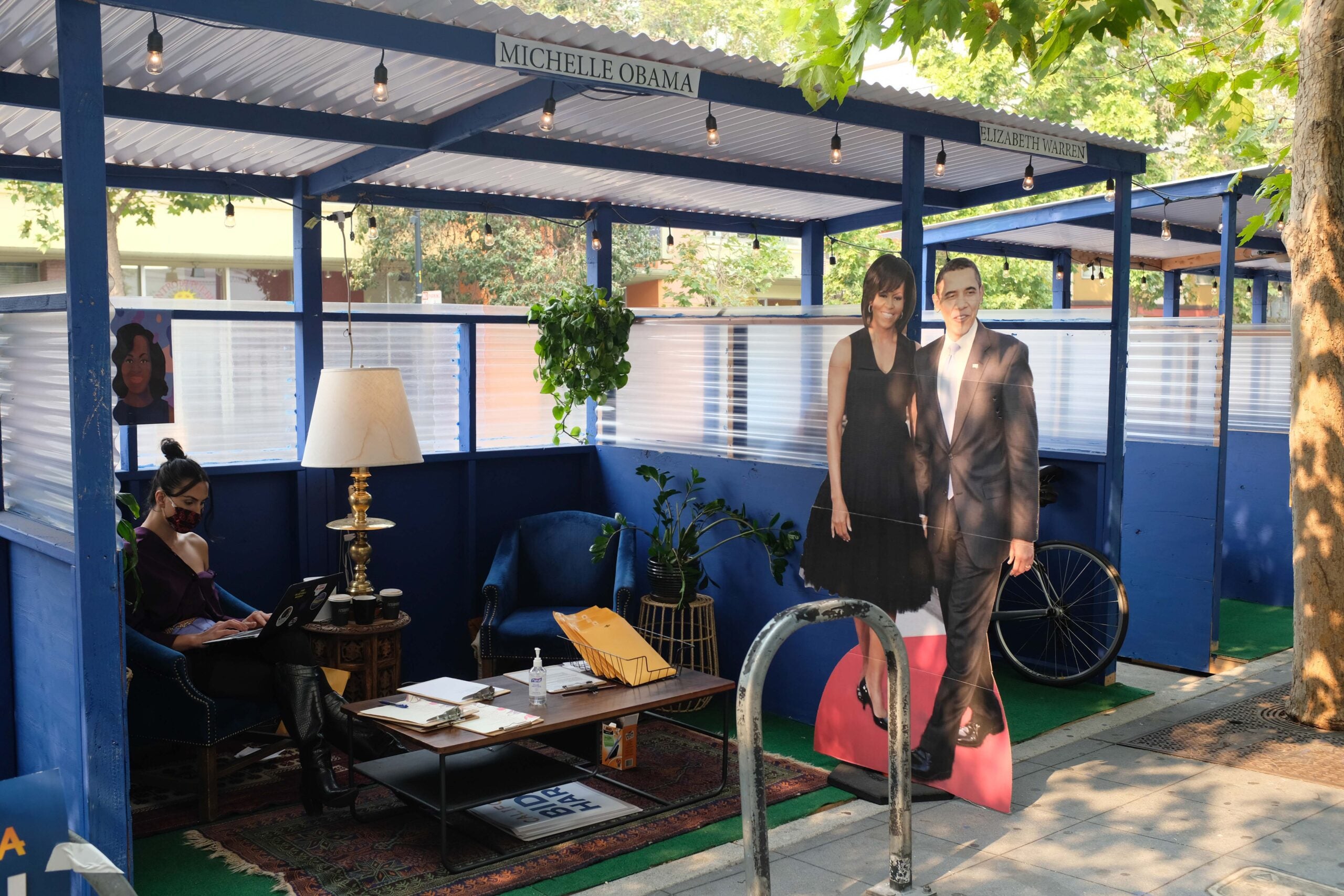 At a busy intersection in San Francisco’s Mission District, Manny’s cafe has transformed a few parking spaces into booths for phone banking and letter writing. (Photo by Britta Shoot)

On 17 March, San Francisco was one of the first major US cities to issue a shelter-in-place order due to the Covid-19 pandemic. In the seven months since, residents and merchants have fought for meaningful alterations to enhance shared public spaces. To stay solvent, restaurateurs have built contact-free takeout windows and set up tables along the sidewalks. Select city blocks are closed to cars each weekend, and some neighbourhoods now have semi-permanent Slow Streets, open for use by pedestrians, cyclists and families with children seeking safe, convenient space for outdoor recreation.

And at one busy Mission District intersection, served by numerous bus lines and a BART station one block east, a unique set of shelters was recently erected.

At Manny’s, a café and gathering space that, pre-Covid, hosted everything from poetry readings to a live reading of the Mueller Report, parking spaces normally reserved for cars have been transformed into workstations. The row of partially covered, bright blue plywood booths are nearly identical to parklets, the creative mini-parks that have sprung up throughout the city over the past decade. But the Victory Booths at Manny’s are somewhat different – they are available by reservation only, equipped with Wi-Fi routers and emblazoned with white letters instructing street-side passers-by to “VOTE 4 KAMALA & JOE.”

Manny’s Victory Booths were designed for phone and text banking and for writing letters to voters in swing states in the run-up to the presidential election. In a decisively Democratic city, each cubicle is decorated to honour left-leaning US elected leaders and appointed legislators such as Representatives Alexandria Ocasio-Cortez and Maxine Waters as well as the late Supreme Court Justice Ruth Bader Ginsburg.

Though the booths’ use requires a reservation, they are free to occupy. They’re also rarely empty. On a recent weekday at noon, masked volunteers and staffers wearing T-shirts with pro-democracy and get-out-the-vote messages milled around or sat quietly writing by hand. The events manager at Manny’s, Jupiter Peraza, sat with a laptop in one of the largest booths, flanked by cardboard cut-outs of the former president and first lady, Barack and Michelle Obama.

“This was built by the community,” says Manny Yekutiel, founder of the community space, referencing a GoFundMe campaign that raised more than $22,000 for booth materials. The money raised is also being spent on letter-writing supplies and stamps.

Sitting on a sofa surrounded by a dozen cardboard boxes overflowing with manila sleeves containing packets of stamps and envelopes, Yekutiel explains that all folks have to do is show up and help remind voters to cast their ballots on 3 November. Based on the volume of participants so far, he says their combined efforts should result in sending 25,000 postcards to voters in Florida.

The idea that accessible public space supports democracy and fosters civic participation isn’t new. Philosophers, planners and theorists from Henri Lefebvre to Jane Jacobs have repeatedly made the case that open, visible participation in civic life is a virtuous circle. John Parkinson, a professor of social and political philosophy at Maastricht University and the author of Democracy and Public Space, says: “Public performance of citizenship really matters.” He emphasises that to be a notable success, initiatives to increase awareness about elections and encourage voter turnout must activate individuals not already engaged with such civic processes.

Indeed, what feels novel is not just how private interests have stepped up election efforts but the way governmental bodies are emphasising democratic processes this year in the US. Federal agencies and professional organisations have issued guidelines for upholding the integrity of the election process as well as protecting individuals from the spread of the novel coronavirus.

The most obvious example comes from the nonpartisan Centers for Disease Control and Prevention, which issued safety guidelines for election officials and poll workers as well as voters showing up to cast their votes in person. Some of the agency’s common-sense directions include mandating mask compliance, regularly disinfecting surfaces and offering longer voting periods – either extra days or extended hours.

The National Association of City Transportation Officials (NACTO) also released recommendations for using public streets for pandemic response and recovery, which include closing streets for safely distanced open-air voting. The suggestions take the concept of “open” or “slow” streets a step further, first closing thoroughfares to vehicular traffic with barricades and signage and then erecting temporary seating and shade.

The NACTO guidelines are applicable to city streets as well as playgrounds, parks or parking lots at libraries or schools – basically any civic space where there is room for individuals to distance, especially if the space is adjacent to a designated polling site.

As the pandemic has closed so many buildings typically used for voting, major metro areas have introduced various mobile-voting options like this one in Los Angeles’s Grand Park. (Photo courtesy GrandParkLA)

Allocating physical space for a multitude of polling places is often the most important – and most challenging – requirement to meet in dense urban centres. This year, some churches, schools and libraries typically used for in-person voting are still closed or have been commandeered for pandemic response and recovery. As a result, some major metro areas have introduced various mobile-voting options. In Los Angeles, Mobile Vote Centers are being erected to specifically serve essential workers such as hospital staff and transportation workers. The City of San Francisco invested in making it easier to cast or drop off a ballot with an outdoor voting centre, open for early in-person voting and ballot drop-off most of the 29 days before Election Day. Wait times are posted on the city’s election department website.

In Texas, which is one of the rare US states not expanding mail-in voting for the November election, one solution being considered is drive-through polling places. These sites could be administered in structures already built for cars, such as parking ramps or disused bank buildings that have transaction windows. Election officials say privately operated spaces historically used for walk-in polling sites, such as senior centres and supermarkets, do not allow enough distancing to be safe options.

With just days left to finalise election infrastructure, creative projects that encourage voting are perhaps even more valuable. Yekutiel says he’s heard from Democratic Party organisers who would love to replicate the structures he and his team have built, but with early voting underway in many regions, politicos are now keenly focused on monitoring election integrity. In the meantime, he’s continuing to offer space to anyone who wants to keep sending cards or making calls up until the last day.

“Honestly, there are more people interested in using the Victory Booths than we have space for,” he says with a happy shrug. To him, this sort of demand is exactly what he’d hoped to meet. “We just want to be useful.”

Britta Shoot is a freelance writer based in San Francisco.