Taiwanese citizens have been travelling to airports with feelings of nervous trepidation recently. The question preying on their minds: will their passports be accepted as valid travel documents?

Concerns were first aroused by a message that appeared on several social media platforms. It claimed that a Taiwanese national was unable to board an Air Canada flight because the airline would not accept his passport in accordance with new Chinese regulations.

“Due to China’s request,” the post read, “Taiwan is no longer listed as an individual country, passports are invalid, and another ID must be used. Please remember your IDs.”

Although this message was later dismissed by the Taiwanese Ministry of Foreign Affairs as misinformation, the wave of panic that it unleashed is not without reason or precedent. Since the Chinese civil war of 1949, the people of Taiwan have argued that they belong to a sovereign state that is clearly distinct from the Chinese mainland. But China refutes this notion, viewing the island as little more than a wayward province that must be brought back under its authority.

Election 2017: What are the parties promising on transport?

These competing geopolitical visions have resulted in numerous efforts by Beijing to delegitimise Taiwanese claims to independence, such as attempts to stop the flying of the Taiwanese flag and filing protests against national military drills. In recent months, however, China has struck upon an alternative approach: questioning how international airlines refer to Taiwan, and indeed if they should even refer to it at all.

What’s in a name?

On 25 April, a letter from the Civil Aviation Administration of China (CAAC) landed on the desks of 36 international air carriers. In it, the CAAC reminded readers that on 27 February he Chinese government had instructed airlines to review their websites, and remove any material that “mistakenly” identified Taiwan, Macau and Hong Kong as independent regions.

The letter also instructed that Taiwan should henceforth be referred to as “Chinese Taiwan” or “Taiwan: province/region of China”. Failure to implement these changes, it went on to state, would result in “disciplinary actions” by the CAAC.

Somewhat unsurprisingly, these demands were not warmly received. Leading the cries of protest was the US president, Donald Trump. In a strongly worded statement released on 5 May, the Trump administration lambasted the CAAC’s letter as a blatant attempt to enforce “Chinese political correctness” as a global standard. The statement said:

This is Orwellian nonsense and part of a growing trend by the Chinese Communist Party to impose its political views on American citizens and private companies. China’s internal Internet repression is world famous. China’s efforts to export its censorship and political correctness to Americans and the rest of the free world will be resisted.

The message from the White House was abundantly clear – the affected airlines should stand firm. 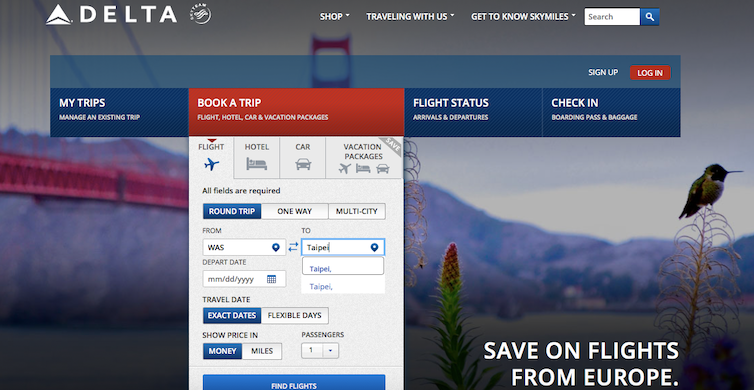 At time of writing, Delta’s website offers flights to ‘Taipei’, but includes no country name as it does for other destinations such as ‘London-Heathrow, United Kingdom’ (see below example) – as this screenshot of its website shows. Image: author provided. 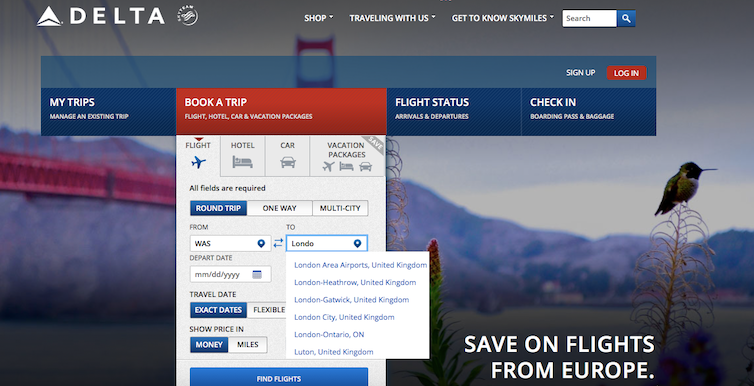 London-Heathrow listed as a destination in ‘United Kingdom’ for comparison. Image: author provided.

Yet the vast majority of air carriers have chosen to bow to Chinese pressure rather than heed the US president’s words. In early June, the chief executive of Qantas, Alan Joyce, announced that the airline would be altering how it referred to Taiwanese airports as soon as possible. And after Beijing set a final deadline of 25 July and rejected pleas for further negotiations, the three largest US air carriers – Delta, United and American Airlines – also elected to meet the CAAC’s demands.

The US State Department later expressed its concern about this decision, while the Taiwanese government responded with a press release condemning China’s “crude attempts to coerce foreign airlines to downgrade Taiwan’s status”.

The long-term ramifications of international airlines choosing to comply with the CAAC’s requirements remain to be seen. It is clear, however, that this episode marks a significant defeat for advocates of Taiwanese independence. When next booking a flight to the island, users of some airlines will not be able to select a destination name that reflects Taiwan’s self-ruled status. Instead, they must choose one that places it firmly within China’s geopolitical orbit.

The events of recent months have also provided Chinese authorities with an effective way to challenge Taiwan’s sovereignty without incurring the wrath of the international community. For all its early rhetoric, the Trump administration has been forced to watch helplessly as American carriers are arguably drafted as foot soldiers in support of China’s territorial ambitions.

There are signs that this strategy is also already being deployed outside the airline industry. Earlier this year, the hotel chain, Marriot, was reprimanded by China after an email questionnaire listed Taiwan, Tibet, Hong Kong and Macau as separate “countries”. Japanese retailer Muji, meanwhile, had to pay a fine of 200,000 yuan (£23,400) for using packaging that identified Taiwan as the “country of origin”.

The dispute over Taiwan’s territorial standing, then, has long since spread beyond a small area of the South China Sea – and it is likely to reach even greater heights in the future.