As the streets of US cities erupted in anger over the police killing of George Floyd earlier this summer, a narrative quickly emerged about how Camden, New Jersey, proves that a city can succeed in radically reshaping its police department. 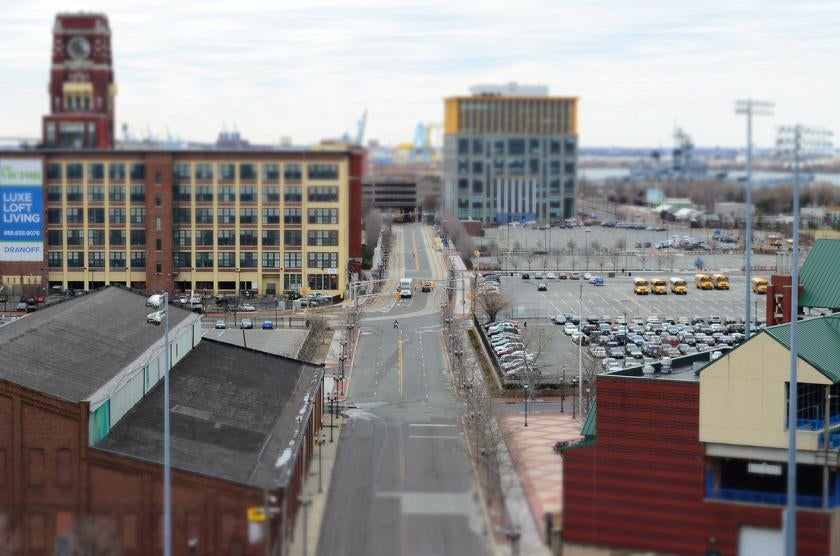 Camden’s police chief won attention and accolades for marching with protesters, an image that contrasted sharply with burning buildings and armored vehicles in Minneapolis. Camden’s lack of a conflagration was quickly attributed to the city’s elimination of its old police force and its replacement with a county-controlled institution.

But while there has been much talk of other American cities looking to Camden as a model, it is not at all clear that the experience of one of the nation’s poorest cities can be so readily replicated.

Camden’s “police reform” story is directly linked to its deeply disadvantaged political-economic position. It is in many ways segregated racially and economically from the rest of the surrounding region, and its local politicians have for some time now been deprived of any real power because the city is heavily reliant on the state of New Jersey for much of its budget.

“[Camden’s experience] was a conjunction of opportunities and circumstances that would be really tough to replicate,” says Alan Mallach, a senior fellow at the Center for Community Progress and a veteran of New Jersey’s local policymaking world. “It’s a city that’s hyper-segregated and hyper-poor in terms of the people who live there and the fiscal resources of the local government. By the time the police issue came to a head, Camden was a ward of the state.”

In the current moment, as activists across the US are calling to “defund the police” and law enforcement unions are seen as an impediment to change, it’s easy to see why Camden’s story sounds so appealing.

But the story of the dissolution of Camden’s police department is directly linked to its status as the New Jersey city with the weakest tax base, in a state that struggles with high rates of educational and residential segregation. State aid has comprised the vast majority of Camden’s budget since at least the 1990s: in 2016, Pew found that the city spent $150 million but has tax revenues of only $25 million.

That reality made then-governor Chris Christie’s 2010 decision to cut state aid to distressed cities exceptionally devastating. Among other sweeping cuts to city services, such as the closure of its library system, the Camden police department saw its ranks cut in half.

As crime spiked, the morale and reputation of the Camden police department plunged. Already facing charges of corruption and brutality from the ACLU, the department and its union made an obvious target. In 2013, the force was disbanded and a new one formed under Camden County control without, at first, union protections. Today, crime in Camden is lower and the reputation of the local police force has improved.

But the story is loaded with complications for those who would seek to emulate it. The new Camden County police force is actually larger than its predecessor and enjoys a larger budget, routed through the county government. Its officers are younger, whiter, and less likely to live in the city. After its establishment, the force ramped up “proactive” policing, which many younger residents experience as harassment. Use-of-force complaints surged, and a new, more progressive rule book was only adopted after a serious campaign by local activists.

One of the Camden plan’s architects, Jose Cordero, says that such a course should only be taken as “a last resort.” He believes the enthusiasm for Camden’s story misses the complexities of the policymaking that he took part in and the fact that it was backed by a major re-commitment of county, state, and federal aid.

“A lot of localities want to rush to get this done but there were a lot of caveats to this,” says Cordero, a former director of law enforcement for New Jersey. “There was a lot of state intervention that made it that possible in terms of not only funding the process but dealing with issues of civil service. It requires upfront funding above what the typical costs of policing are.”

One of the most prominent caveats is that depriving a municipality of local control over police will be highly controversial. Camden residents actively fought against the elimination of their police force, gathering thousands of signatures to sue the city and the county to prevent the plan from being enacted. (In 2015, the New Jersey Supreme Court unanimously ruled that the action was illegal but by then it was far too late.)

“Yes, there was corruption and the police force was problematic,” says Ojii Baba Madi, pastor of Asbury Community Church in Camden. “But nobody in the community was saying, ‘hey, you know what, let’s wrest control of this force from the city and put it in the hands of the county.’ There was no robust effort at community engagement at all.”

There is still deep displeasure among many Camden residents that the police department is no longer locally controlled and that its demographics do not reflect the city’s majority Black and Puerto Rican population. Madi says that there is a strong sense that they are living in a policy laboratory because the city is in such an abject fiscal position, allowing it to be a site of experiments for more powerful politicians.

As evidence that the new police force exists in spite of their wishes, city residents point to the fact that the new department only serves the city, even though any jurisdiction in Camden County could opt-in to it.  But of the 35 other county municipalities eligible for coverage by the force, every single one opted out.

“In New Jersey, and many other states, but Jersey more specifically towns really care about self-identity,” says Cordero, who helped formulate the Camden County plan. “It’s very difficult for them to give up their police or fire. Whether they’re too costly, whether they’re ineffective, they want local control. I’m not saying that’s a bad thing. What I am saying is I wasn’t surprised [when all the other municipalities opted out of the force].”

It is partly this expansive patchwork of townships, and the quirks of municipal finance in the US, that doomed Camden. Unlike many European countries, or Canada, tax revenues and services in the United States are not broadly shared across a region. That means a resident can pick up from Camden, move a mile away to bordering towns such as Pennsauken or Woodlynne, and take all of their local tax dollars with them into those townships. That’s why capital flight, and then white flight, devastated Camden so thoroughly: companies and residents with means could move nearby with minimal disruption while ruining the city budget.

Many of the townships outside Camden are working class, and some are non-majority white or increasingly racially diverse, but they’ve historically done far better out of this arrangement than the city. That’s why they felt no pressure to join the county police system.

“The United States is an outlier in the extent to which we organize and support services at a very local level,” says John Logan, a professor of sociology at Brown University. “One of the awful things about that is the very communities where the most services are needed are places that have less ability to provide those services. While those communities are disadvantaged by that system, there are winners and they don’t want to give up anything.”

Camden’s situation is also an outlier in that New Jersey is unusually generous in the amount of aid it provides to distressed municipalities. Because New Jersey provides so much funding to the city, state leaders have felt very comfortable stripping city political leaders of power more formally as well.

In the 1980s, oversight from the capitol in Trenton required Camden to seek state approval for any contract or purchase over $4,500, and for all municipal appropriations. In the 1990s, a financial control board took even more power from city lawmakers, and between 2002 and 2010, the state took total control of Camden’s government.

Today, in addition to county control of the police department, the state controls the local school district. At the regional and county levels, a well-oiled political machine run by the insurance executive George Norcross has happily worked with governors of both parties to formulate these plans.

Rutgers professor Stephen Danley believes that the formal power over the police that Camden lost to county and state leaders actually empowered local activists in a roundabout way.

“Camden residents lost formal accountability with the disbanding of the police, however, residents gained informal accountability because the political architects of the plan were on the hook for its success,” says Danley, who lives in Camden. “The responses by the new force were complex, but some of them were clearly in response to critiques by the local NAACP and the burgeoning local Black Lives Matter movement.”

Danley points to reform successes such as a 2019 order that Camden police officers must intercede and stop fellow officers if they see excessive force taking place. Use-of-force complaints have since plummeted, and the number of instances when officers report that they have used force have fallen as well.

Nonetheless, Camden’s story does not provide any easy answers to police reform for American policymakers. Instead it is a story of a city that is unusually abject before state and county powerbrokers. At the same time if Danley is right – it is also a story about how city residents managed to pressure police officials and leaders who weren’t democratically accountable to them into doing the right thing.

If there is one big takeaway from the Camden story it is that dissolving a local police department and starting anew is not a popular move. Many city residents are still angry about the loss of their department, a final indignity after decades of declining power and autonomy. No other localities wanted to take part, all of them professing to be too attached to their local forces.

Two big stories of 2020 could potentially shift that narrative. In neighboring Woodlynn, a police officer who’d left the Camden County force and eight other departments by the age of 30, got scooped up by the township. He is now suspended again for pepper-spraying a teenager with no provocation on 4 June, in the midst of nationwide protests against police brutality.

“If we were truly a county police force, that would not have happened,” says Madi, whose church is located in Woodlynn. “Why does Woodlynn, a tiny borough nine blocks long, have their own department? I would be a lot less critical if this were a truly county-wide plan, because that really makes sense to consolidate. But that’s not what it was. This was a political and power grab.”

Now though, it is possible that townships could be forced to seek cost savings in  the Camden County force. The coronavirus and its attendant economic catastrophe mean states and municipalities are facing unimaginable financial hardships. New Jersey is starting at a $10 billion budget hole by the end of the next fiscal year. Under these stark conditions, the case for public service consolidation may become too strong to resist.