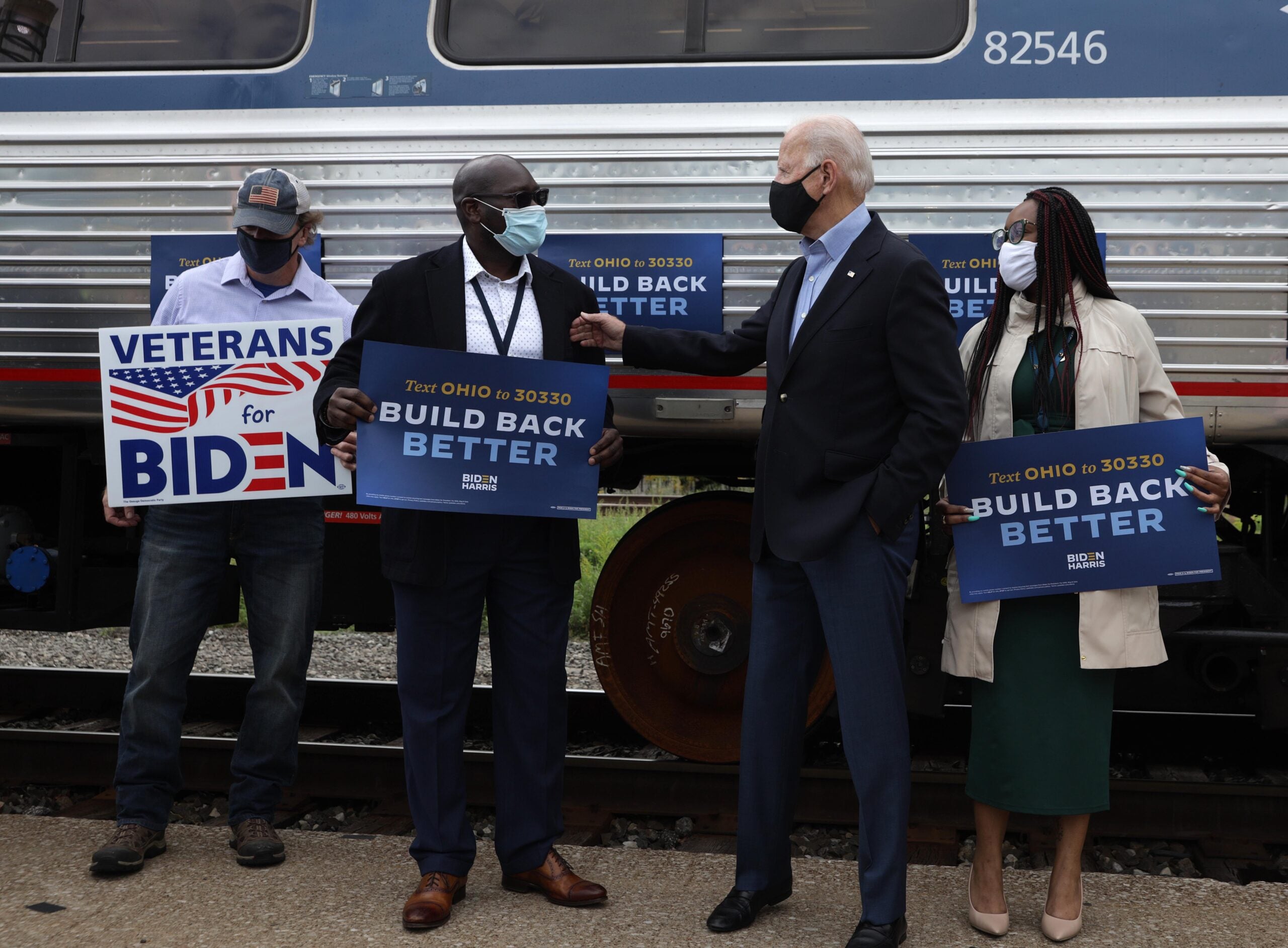 Train aficionado and then-presidential nominee Joe Biden speaks to supporters before embarking on a rail campaign tour at the Cleveland Amtrak station in September. (Photo by Alex Wong/Getty Images)

The election of Joe Biden, who earned the nickname “Amtrak Joe” after riding the rails for decades, has elevated the hopes of train advocates. But they have reason to remain skittish after watching political polarisation toss President Barack Obama’s plans for high-speed rail into a coffin – one that President Donald Trump started to nail shut. But many now see the next president’s enthusiasm and epic plans as the best chances for the US to reshape its inadequate train system, which still lacks any true high-speed rail.

“This is a unique time in history,” says Andy Kunz, president of the US High-Speed Rail Association. “Rarely, you have a president as a huge rail supporter. You have to go all the way back to Lincoln for a president who is that seriously into rail.”

Biden’s pick for transportation secretary will also support passenger rail projects after current Secretary Elaine Chao sabotaged them. For example, she revoked funding for two critical rail projects and reduced federal support for the Northeast Corridor, the nation’s most popular passenger route, which winds from Washington, DC to New York and Boston. Biden’s candidates for the post include Los Angeles Mayor Eric Garcetti, who oversaw a massive transit expansion in his notoriously car-centric city, John Porcari, who served as deputy secretary of the Department of Transportation under Obama and is backed by labour unions, and Oregon Rep Earl Blumenauer, a transit advocate who co-chairs the Congressional Bike Caucus.

But when rail advocates consider other harsh realities, their optimism is tempered. With Republicans expected to maintain control of the Senate, many doubt how far Biden can get with his plans for climate ($1.7trn) and infrastructure ($2trn). Together, they call for giving the US the “cleanest, safest and fastest rail system in the world”. However, whatever funding does become available, the country’s staggering rail construction costs will severely limit its impact.

“I flip a couple of times per day between newfound optimism and fatalism,” says Sean Jeans-Gail, the vice-president of policy and government affairs at the Rail Passengers Association. The organisation acknowledges that any new rail projects may not break ground within Biden’s four or eight-year presidency. But any additional funding could help other projects take shape quickly, including electrifying rail lines, accelerating existing routes and boosting already-planned projects.

The need for sustainable, high-capacity transportation options has grown more pressing as climate change intensifies and the economy stifles amid congestion at US airports and highways that brings millions of US citizens to a standstill every day. However, Biden’s rail ambitions will face stubborn obstacles. Some include misplaced transportation priorities, unreasonable costs and likely Republican obstruction.

But that hasn’t stopped Biden from dreaming big. His transportation agenda intends to “spark the second great railroad revolution”. In this appeal to national greatness, Biden’s climate and infrastructure plans evoke the 1869 completion of the country’s first transcontinental railroad as a patriotic symbol of the US’s past achievements.

The president-elect’s vision, though still a broad outline with few details, offers these priorities:

Biden’s vision for passenger rail, and more generally for public transportation, however, is embedded in climate and infrastructure plans that total several trillion dollars. And the train plans could crumble thanks to high construction costs and likely Republican intransigence.

Republicans can clobber Biden’s rail aspirations if they maintain control of the Senate in 2021. Though there’s a chance Democrats could win control of both legislative bodies, we won’t know until after two Senate runoff elections in Georgia on 5 January. Rail advocates worry that Republicans, many of whom supported high-speed rail until it became the focal point of Obama’s transportation plan in 2008, will again retaliate against what they may perceive as a win for Democrats.

“If [Biden] does make [passenger rail] his signature thing, there could be a backlash,” says Jeans-Gail. “That was certainly what happened to Obama.”

Rail projects will also compete for cash amid a growing national backlog of infrastructure projects. Congress has not raised the gas tax for 27 years, which pays for transportation construction, maintenance and repair. And Trump’s promises of an infrastructure plan never materialised. But Biden’s big-budget proposals may also raise Republican concerns about contributing to the national debt (which vanish whenever a Republican president is in power).

What is likely to come about under Biden may be substantially more modest than his vision, Jim Mathews, head of the Rail Passengers Association, told Politico. He sees the new administration as the likely steward of a “steady, incremental, supportive type of atmosphere for Amtrak specifically and for passenger rail generally”.

The factors that will likely impede Biden’s train ambitions include misplaced priorities and the crippling costs people in the US pay to build passenger rail, predicts Connor Harris, a fellow at the conservative Manhattan Institute and author of a piece published by the Hill critical of Biden’s plans. “The biggest obstacle to improving rail service and transit in the US is construction costs,” he said in an interview. “If you want better rail transit, you need to contract construction costs.”

The US often pays the highest rail construction costs in the world, according to comparisons Alon Levy, an influential transit blogger, has documented. In 2018, their research informed a New York Times investigation into two subway projects that cost up to seven times more than similar projects elsewhere in the world. And rail advocates agree that reducing costs is urgent.

“Getting [expenditures] in line with international standards is something everyone in the industry says publicly,” Jeans-Gail says. “We want to lower costs.” And for an example of the US’s excessive spending, look to the California High-Speed Rail project.

In 2008, California voters approved a $33.6bn plan to connect the 380 miles between Los Angeles and San Francisco. Cost estimates now hover around $80bn. California has found funds for only a fraction of that amount. To deal with the shortfall, Governor Gavin Newsom this year scaled back the project. Now neither of the state’s two largest cities will connect to the partial line currently being built in the agricultural San Joaquin Valley though still moving forward are all the route studies, land planning, and permitting to connect into San Francisco and Los Angeles.

The project, which did not break ground until 2015, has also faced countless delays. In response to its reduced scope, slow progress and cost overruns, in May the Trump administration, with the support of Chao, revoked a $929m federal grant and demanded that the state repay $2.5bn from an earlier one. Kunz explained that the state has been left to do everything on its, from creating new standards to securing both funding and land.

Biden could restore those funds, but so far none of his plans suggest reforms that could address the many factors that cause delays and inflate rail construction costs, according to Harris. Several Biden priorities may balloon expenses further, Harris says, including emphasising job creation over the development of a rail network that many people will find useful.

Another budget-busting expense stems from the US’s inexperience in building modern passenger rail systems. The federal government usually allocates funds for new rail projects to state agencies and highway departments. Most have little to no expertise building train lines, which demands hiring armies of costly outside experts.

“Infrastructure projects are an especially inefficient way to create middle-class jobs because much of the spending goes to international consulting and engineering firms,” Harris says.

The president-elect’s climate plan also suggests the construction of a coast-to-coast high-speed train. Though there are few specifics, such a line would likely rack up exorbitant expenses as crews built it across the country’s many vast and sparsely populated areas. The project would also need costly tunnelling to traverse the Sierra Nevada and Rocky Mountains. “This is what you get when you lead with high-speed rail as a programme of national greatness rather than a programme of helping people get to where they need to travel,” says Harris.

Even the US High-Speed Rail Association, a group that advocates for a national network of fast trains, instead suggests starting with high-speed lines that would connect 11 major population centres before attempting to span the coasts. But Kunz sees the several high-speed rail projects already under development, including the California High-Speed Rail and privately led projects in conservative states like Texas and Florida, potentially reducing Republican resistance.

“Back in 2008, this was like going up Mount Everest,” he says. “The size of the uphill battle is getting smaller.”

Perhaps Biden can pull the nails from the coffin in which the US’s passenger rail ambitions lie. And modest progress is likely. But without bipartisanship and reforms to address delays and high costs, rail advocates have many reasons to doubt that his grand vision will soon become reality.

Andy Bosselman is a freelance writer based in Denver.