The city of Tirana marks its 100th anniversary as the capital of Albania this year, but the centennial celebration is starting out on an undeniably difficult note. Still reeling from a magnitude-6.4 earthquake that struck towards the end of 2019, Tirana now must manage its recovery from that disaster amid a pandemic that’s forced all city officials to work from home. 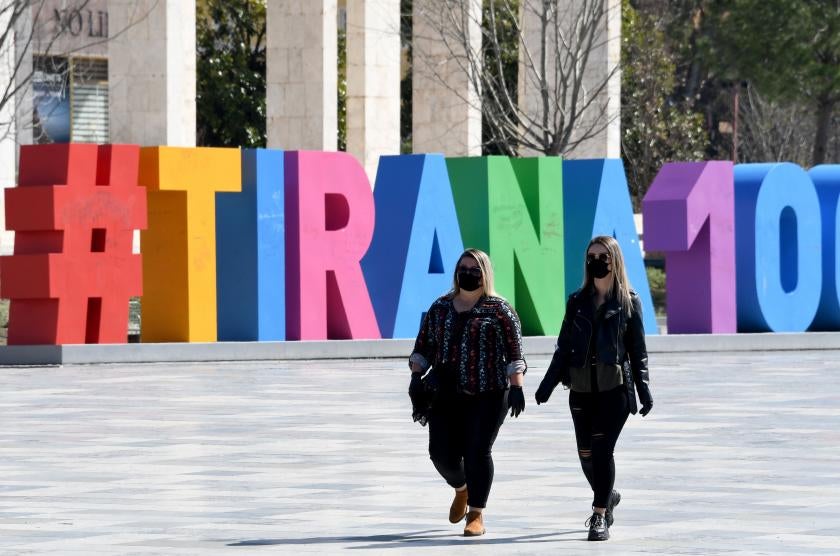 Tirana, Albania’s capital, in the age of coronavirus. (Photo by Gent Shkullaku/AFP via Getty Images)

“We cannot pick and choose the emergencies we face, unfortunately,” says Erion Veliaj, mayor of Tirana, a city of roughly one million that accounts for a third of the population of Albania and 40% of the country’s GDP.

As city leaders, mayors across Europe find themselves at the sharp edge of the coronavirus crisis: directly responsible for the health of their local economies, yet with varying degrees of autonomy and authority. With a global recession looming, Europe’s mayors are deploying what tools they can, but say they’ll need both national and supranational intervention.

Juan Mari Aburto, mayor of the Basque Country city of Bilbao, says that tackling the crisis requires a “multi-level effort”. He stresses the importance of “knowing how to complement macro policies promoted by more distanced organisations such as the European Central Bank, the government of Spain or the Basque government, with micro policies”.

“At this point the City Council is the institution closest to the general public, with the benefits of the urban-level agglomeration economies, and it is able to make use of these strengths,” he says.

As cities everywhere brace for job losses and economic downturn, many European cities are particularly vulnerable due to heavy reliance on tourism as a key source of revenue. Local tourism industries will need immediate support from all levels of government.

“The situation is highly challenging and neither we, nor anyone else, knows how much longer the epidemic is going to last. The industries whose income is correlated with tourism will bear the brunt of the situation,” says Jacek Majchrowski, the mayor of Kraków, a tourism and cultural hub for Poland. Last year the city welcomed 14 million visitors who spent a total of PLN 7.5bn (roughly €1.6bn). Much of that spending went directly to local companies or independent operators working in tourism services, catering, transport, retail and real estate.

“It is very worrying that many local small and medium enterprises are at great risk, as their smooth functioning is, in fact, elementary in maintaining the supply chain in a city like Kraków. We keep re-estimating the losses and realise that, even when the current health crisis subsides, we will have to face its long-term consequences. This is why we are already trying to support the local entrepreneurs and help them survive,” Majchrowski says.

Florence, one of the world’s most successful tourist magnets, is located in northern Italy, a region hit especially hard by Covid-19. “At the moment we face an estimate of a €1bn loss for the city district,” says Dario Nardella, the city’s mayor. “All tourism-related businesses have stopped: hotels, restaurants, stores and luxury stores, agencies, museums. They’ve all shut down.”

Nardella has proposed a €1bn national fund for financial aid to tourism-oriented Italian cities. “Moreover, we will need an ambitious plan to simplify bureaucracy in investment attraction, to attract both national and international investors to Florence – a city that has shown already a very strong appeal at global level in the last few years, by developing infrastructure, public transport and touristic facilities,” he says. The pricetag for the latter he puts at €3.5 billion.

“A strategic bailout plan will be necessary from both the central government and the European Union to restart the economy. Without a firm – and united – European strategy based on a united EU policy aiming to a real shared effort to restart the economy, all cities will be facing a dramatic crisis in just a few months. We need a financial plan similar to the one announced by President Trump for the US,” Nardella adds.

Tirana’s mayor Veliaj agrees on the need for concerted action: “There will be a need for global agreements and guidance to address this global challenge. Hence it remains an issue for which the stimulus has to come from multiple international actors.” Albania, he points out, received a welcome spark of good news during this otherwise difficult time in the form of the unanimous agreement of member states to open EU accession negotiations with the country. “This will improve our investment ratings and our investor attractiveness, or at least serve as a stimulus during and after this health crisis,” Veliaj says.

The degree to which cities can count on an influx of private investment is now questionable, as the lifeblood of foreign direct investment (FDI) is at least temporarily cut off. The UN Conference on Trade and Development has warned of a devastating drop in FDI over the next year, with the latest estimates projecting as much as a 40% decline.

“At the moment we cannot make any plans to engage international investors and attract foreign direct investment,” says Michalis Pavlides, mayor of Geroskipou in Cyprus.

The coronavirus pandemic comes at a time when Europe has been moving towards stricter controls on inbound FDI, and EU guidance currently urges member states to screen inbound investments. This tightening of the screws on FDI has rankled many parts of Europe, especially less developed countries that need FDI desperately to meet their development goals and spur employment. The crisis has reopened this debate and called into question whether Europe now can afford to restrict the types of investment that might flow in.

“Developing countries face multiple pressures, and there will be a need to re-evaluate our plans to engage international investors and bring in FDI. But so will the rest of the world,” says Veliaj. “The past year we have been working on establishing technical and economic development areas in Tirana as our next step to facilitate large-scale investments in the country. Sensibly, longer-term investments will be less affected than short-term investments in the face of this crisis.”

Although FDI is more urgently needed than ever, investment promotion at this moment in time is a complicated endeavour.

“The real estate and investment event MIPIM in Cannes [planned for March], where we were supposed to present our new offer for the real estate sector, was cancelled,” says Jacek Jaśkowiak, mayor of Poznan, Poland. “Still, we have other communication means left, with the use of new technologies. We stay in touch with the companies already present in Poznan as well as with potential investors and we strive to keep them informed. The city has a number of real properties meant for sale, and perhaps soon, in spite of it all, there will be a good time to invest in them.”

Bilbao was about to launch its flagship new urban development project, Zorrotzaurre Island, when the crisis hit. But rather than shelve it, the city plans to make an even more intensive effort to attract international investors and developers who could support it. A recalibration of FDI strategy is necessary, though.

“We are taking advantage of this contingency phase, to adapt the life cycle of promoting investments in our city, and understand the correlation between the attributes of our community and the new business needs in the future scenarios the crisis will leave,” Aburto says.

Some leaders strike an optimistic note about their cities’ investment prospects post-crisis. “Our conviction is that, in a couple of months, we will be able to attract more investments to the city than the ones that were being negotiated before this crisis,” says Ricardo Rio, mayor of Portugal’s third largest city, Braga, which had been experiencing an increase in popularity among tourists but also has a well-developed technology cluster.

“The city council and [investment promotion agency] InvestBraga are now addressing our efforts in two dimensions: immediate support to small businesses and entrepreneurs in order to give some consultancy, for free, on how they can take advantage of national or local government measures: credits, fiscal exemptions, labour law; and design of a recovery plan to be implemented as soon as the economy starts to work back again,” says Rio. “We have also been providing help to local businesses to go online and keep their activity working.”

Taking a longer view, some mayors see the crisis as an opportunity to accelerate the modernisation and digitisation of their local economies, albeit painfully.

“The crisis and the need to work from home has become an incentive for companies to further invest in technology and improve their organisational adaptability,” says Tirana’s Veliaj.

While there is an understandable urgency around supporting small businesses and eventually helping them through the painful transition to a post-pandemic world, big businesses cannot be overlooked, either, due to their importance as job creators.

Majchrowski points out that the epidemic is also a major challenge for business services – one of Kraków’s key industries, employing approximately 80,000 workers in the city. “We must remember that operations of the business services sector are closely interconnected with other entities and depend on their smooth functioning. The consequences of the Covid-19 pandemic in one sector will resonate far beyond it, which is why the business services sector companies expect cohesive, long-term programmes instituted primarily by the national authorities,” he says. “Systemic support is essential in ensuring that both small and large enterprises survive, consequently fueling the entire economy.”

Topics in this article : Covid-19 , Tourism