In 1976, the film director Claude Lelouch strapped a gyro-stabilised camera to the front of his car and set off on a joyride across Paris. While running through 18 red lights and topping out at 142 miles per hour – Lelouch called the filming “an immoral act” – the filmmaker captured bumper-level views of the Arc de Triomphe and the Champs-Élysées. Released as a nine-minute short, C’était un Rendez-vous, the stunt was a gearhead’s dream: a vision of a city that was made for cars.

Today, on the other hand, Parisian cyclists release videos showing crowds of teens stunting on bikes across the city’s grand boulevards in summertime, popping their front wheels while executing intricate dance moves. It’s an electric display of community, creativity and city life – one that’s in direct conflict with Lelouch’s reckless thrills. It’s also an effective advertisement for the potential of a concept that’s gaining traction in urbanism.

The “15-minute city” is an approach to urban design that aims to improve quality of life by creating cities where everything a resident needs can be reached within 15 minutes by foot, bike or public transit.

This concept puts an emphasis on careful planning at the neighbourhood level, giving each district the features it needs to support a full life – including jobs, food, recreation, green space, housing, medical offices, small businesses and more. And importantly, it’s a full life that doesn’t require a car. 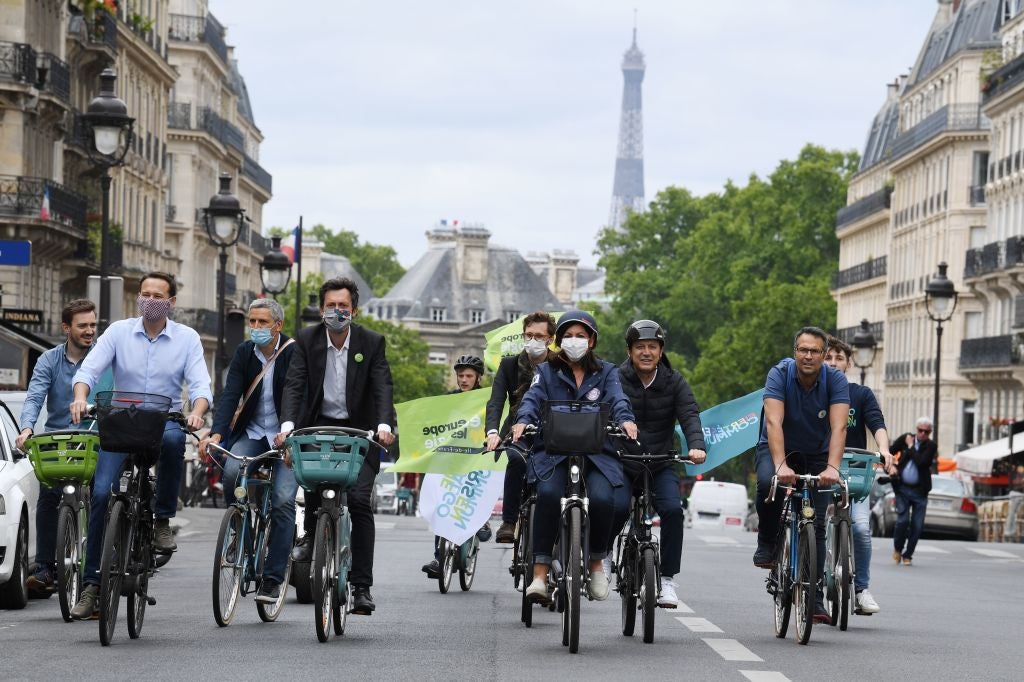 Paris Mayor Anne Hidalgo (centre) rides her bicycle in Paris to promote her vision of the 15-minute city during the city’s 2020 mayoral election. (Photo by Alain Jocard/AFP via Getty Images)

A brief history of the 15-minute city

The overall idea isn’t new: it builds on principles of New Urbanism and transit-oriented development, and it finds its roots in the idea of the “neighbourhood unit” advanced by the American planner Clarence Perry in the early 1900s. Similar visions of 30- and 20-minute cities or neighbourhoods have also emerged in the past decade, notably in Australia.

But the 15-minute-city concept (la ville du quart d’heure) found new popularity in 2019 from Carlos Moreno, a French-Colombian professor who developed the idea in pursuit of amour des lieux, or attachment to place.

The quest to improve quality of life doesn’t require a city to “wage a war against cars” or “build a Louvre every 15 minutes,” Moreno says. Rather, it needs to decentralise by adding more options for walking, cycling and public transit, and focusing on economic development in every corner of the city. Moreno says the work of Jane Jacobs, the urbanist saint, figured into his plans.

Paris Mayor Anne Hidalgo quickly became one of the most prominent champions of the 15-minute city. The idea was a centrepiece of her successful 2020 reelection campaign, and it served as a useful, colloquial packaging for work her administration has done since 2014 to pedestrianise, promote cycling, restrict cars and bring parks and people-first infrastructure to the City of Light.

It now stands as her central policy framework to improve quality of life and help the city live up to the goals of the Paris Climate Agreement. As cities around the world strive to make similar transformations, Paris’s experience with the 15-minute philosophy will be closely watched for ideas that can be emulated elsewhere.

There’s already compelling evidence that the 15-minute city can work. Replacing long commutes and car-first transit with bikes and walking would slash vehicle emissions, increase resident health and free up roads and parking spaces for other uses.

Most trips taken in cities are pretty short. Research on U.S. households’ driving habits found that nearly 60% of their one-way trips are less than six miles (9.6km), and 75% of all trips are ten miles or less. It’s worth acknowledging that the 15-minute city seems so bold and transformative precisely because the way we design cities now is antithetical to its goals.

Replacing parking spots and roads for cars might seem like a counterintuitive way to improve traffic, but in fact the other approach – adding more roads and other accommodations for cars – is what doesn’t work. It’s a central tenet of induced demand: more asphalt leads to more congestion, which leads to demand for more roads.

What’s more, there’s a market for building neighbourhoods that don’t require cars. A research report called “Foot Traffic Ahead”, compiled by a team of academics, advocates and commercial developers, found that so-called “walkable urban places” in the United States demanded 75% higher rent over the metro average in the nation’s 30 largest cities, all while increasing equity and investment opportunities.

In many ways, Paris is an ideal proving ground for the 15-minute city: it’s a dense city that’s just six miles across, with a celebrated history as a place for beautiful strolls and street-front cafés.

Hidalgo’s embrace of the idea, and rollout of concrete changes, has been swift, though not without controversy. Car owners have fought her at every turn, and extensive construction of bike lanes made parts of the city seem like a giant construction site. But by the spring 2020 election, her mobility overhaul was generally accepted by her competitors for the mayor’s office, having become an accepted term of the debate, not a radical idea to dismiss and demean.

The changes are palpable. Hidalgo has banned cars along a stretch of the River Seine – formerly a congested thoroughfare for car commuters – creating a new pedestrianised gathering spot where “cyclists mix with boozy sunbathers, tourists on electric scooters and giggling children.” She unleashed wave after wave of cycling infrastructure as part of an evolving Plan Velo and pledges the city will have 1,000km (621 miles) of finished cycle paths by 2020. The city also has subsidised certain businesses in targeted neighbourhoods, turned school playgrounds into parks, encouraged urban agriculture and even talked of creating urban forests.

The push has paid off. Some roads see triple the number of cyclists, and the Champs Elysées, where Lelouch zipped across, is now lined with segregated cycling lanes. Hidalgo has further promised to eliminate 60,000 parking spots for private cars by 2024 and to utilise smart-city technology to make the remaining cars and trucks on the road more efficient, speeding up package delivery and making it easier to find parking. During the Covid-19 pandemic, she fast-tracked the transformation of streets into emergency corona pistes cycle lanes. And while Paris wasn’t the first to adopt the concept, it has unquestionably done the most to put it into practice.

Other places pursuing the 15- or 20-minute-city concept include:

How to make the vision a reality

Moreno says achieving the 15-minute city requires “deconstructing the city,” or, more specifically, mixing as many different uses as possible. Better understood as anti-zoning, this would undo decades of urban-planning orthodoxy and industrial-era economic development that focused on siloing different activities in distinct parts of a city. Moreno also champions the use of hybrid spaces: schoolyards as parks, civic facilities that have multiple uses and provide a range of services, and multi-use buildings and cultural spaces (such a school that serves a different purpose on weekends).

Strong Towns, a US-based planning and advocacy group, made a list of actions American cities could take to achieve these goals, which serve as good advice for any metro. To build a 15-minute city, Strong Towns recommends:

Turning planning and development inside out, as those steps would require, isn’t the only issue. How do cities with extensive tourism traffic maintain tight neighbourhoods with huge influxes of guests? Every metro region, including Paris, sees a daily tide of workers come downtown and leave, so it’s a significant challenge to decentralise corporate life by moving jobs to remote neighbourhoods.

While the transportation and mobility shifts Hidalgo has ushered in have been significant, they also may be the easy part of making the 15-minute city a reality. Truly dispersing employment and civic services in a useful way would be a real accomplishment. Doing so in an equitable manner – addressing the specific needs of disadvantaged areas as well as the rich ones – would be a marked and much-needed departure from historical patterns.

But in the Covid era, where lockdowns and transit shifts have made urban dwellers reorient their lives and rediscover their immediate neighbourhoods, the 15-minute city may have caught its stride at the perfect time. For years, consumer megatrends have championed local shopping and food, supporting neighbourhood businesses as well as urbanisation and car-free lifestyles. Viewed in that light, the vision Hidalgo and others champion isn’t a radical departure as much as it’s creating a blueprint for a lifestyle many already aspire to have.

Topics in this article: Congestion, Megacities