The Grenfell Tower fire resulted in the greatest loss of life from a fire in Britain since World War II. A year on, we know that the fire’s rapid spread was at least partly due to the cladding that enveloped the building. Although a public inquiry is ongoing, and we’re still waiting for the full results of forensic evidence, there is no doubt that changes are needed to prevent this catastrophe from happening again.

This includes new regulation for high-rise buildings and the use of flammable materials in their construction. In addition, experts and researchers in fire safety need to work more closely with the government and construction companies. More immediately, for buildings similar to Grenfell, that were built according to old regulations, simple and immediate actions should take place now. Evacuation routes, sprinklers and fire retardant materials need to be installed as quickly as possible.

Grenfell Tower was built in 1974 and contained 120 flats, housing between 400 and 600 people. It was like a small vertical village. In 2016, the building was refurbished at a cost of £8.6m; this was when the cladding was introduced.

From the first media reports on the morning of 14 June 2017, engineers and scientists raised concerns over how quickly the fire spread, especially on the outside of the building.

It seemed that the fire was unable to be contained within a compartment. The concept of compartmentation in fire engineering is widely used in constructing buildings. By adding fire barriers, often fire resistant doors, fires are supposed to stop spreading quickly and so allow time for evacuation and treatment. But at Grenfell this did not happen: the fire quickly found access to the outer side of the building. Something had gone horribly wrong and the fire safety advice to residents to stay inside has since come under scrutiny. 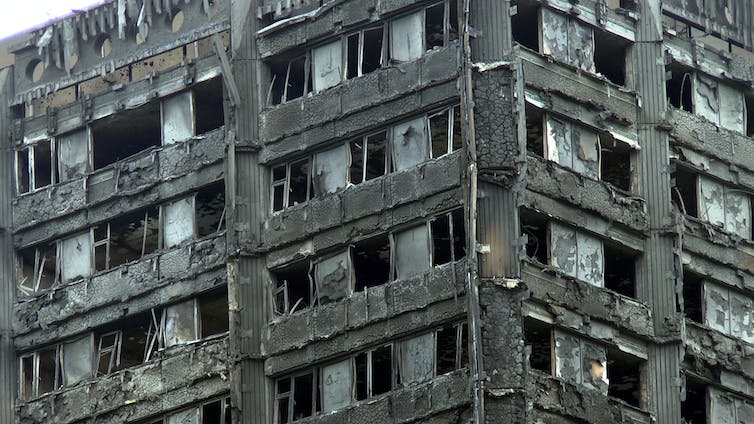 The flammable cladding was instrumental in the fire spreading so quickly. Image: Flickr/ChiralJohn/creative commons.

Immediately, the focus was put on the new exterior skin (cladding). This not only contained flammable materials (polyethylene insulation covered by thin aluminium sheets that buckle in high temperatures and expose the internal material to flames), but was also installed onto the existing incombustible reinforced-concrete structure, in a way that left a gap between the facade and the building’s structure. This enabled what is known as the “chimney effect”. Put simply, the gap between the facade and the structural skeleton of the building meant that the fire sought oxygen and quickly travelled vertically, while burning more of the flammable skin.

It seems that the facade system, even if it was designed according to some regulations, did not perform properly. Such a catastrophic failure can never be the result of one single factor but rather was a chain of unforeseen events happening all at the same time.

Making sure it doesn’t happen again

Materials are still being fire-tested and several blocks remain evacuated. But although changes to building regulations are likely, these changes have yet to happened. This is partly because of the sheer complexity of the issue.

But some of the regulations that need to be implemented are clear. For a start, each type of building should be designed or refurbished with the appropriate regulation. So for example, all buildings that are higher than five stories ought to be provided with alternative evacuation routes such as more (or external) staircases, be equipped with sprinklers, and only be allowed to use fire-retardant materials, such as cementitious boards, ceramics, or glass facades.

Buildings like Grenfell should further be equipped with more sophisticated early warning systems that can detect the smoke and fire early enough. Not only could these systems set the alarm on and activate the sprinklers, but they could also restrict the fire within an area by making the building “active”. This could include automatically closing windows and self-controlled ventilation systems and elevators.

Another major positive change for tall residential buildings, would be the increasing use of performance-based fire resistance design. This is when each particular building is designed so that it performs under certain safety and strength criteria, allowing engineers to fully understand how the building will respond thermally and structurally to a fire incident.

Currently in the UK, for some buildings a general prescriptive-based approach is followed, which simply states how a building is to be constructed. The problem with prescriptive guidelines is that engineers ignore the actual response of the building and the effect of real fires, making the level of safety and robustness an unknown. Although this might be more costly in time and expense, when you have so many people living in one building it is necessary.

Each building design is also a different entity with its own limitations. So each building should be treated accordingly.

Forensic evidence is still being collected and preserved. Once all the evidence is in, researchers and investigators will be able to review the causes and reasons why the fire spread in more detail. But right now we still do not have a deep enough understanding of the flammability of the facade systems, or the toxicity of the materials used.

Once we do, collaboration between academic researchers and companies producing cladding and other construction materials will be key. This is the only way of ensuring that products are developed to meet or exceed rigorous safety standards when put under pressure. This will be crucial for giving housing residents and the public greater confidence. Better communication between building regulators, local authorities, manufacturers, developers, and designers is also important.

We must start rehabilitating tall residential buildings as soon as possible, before another disaster occurs. And out of this tragedy must come long lasting changes to the design of buildings, the construction materials used, and the way they are applied.

This article is from the CityMetric archive: some formatting and images may not be present.
Topics in this article : Disasters , Megacities
Websites in our network