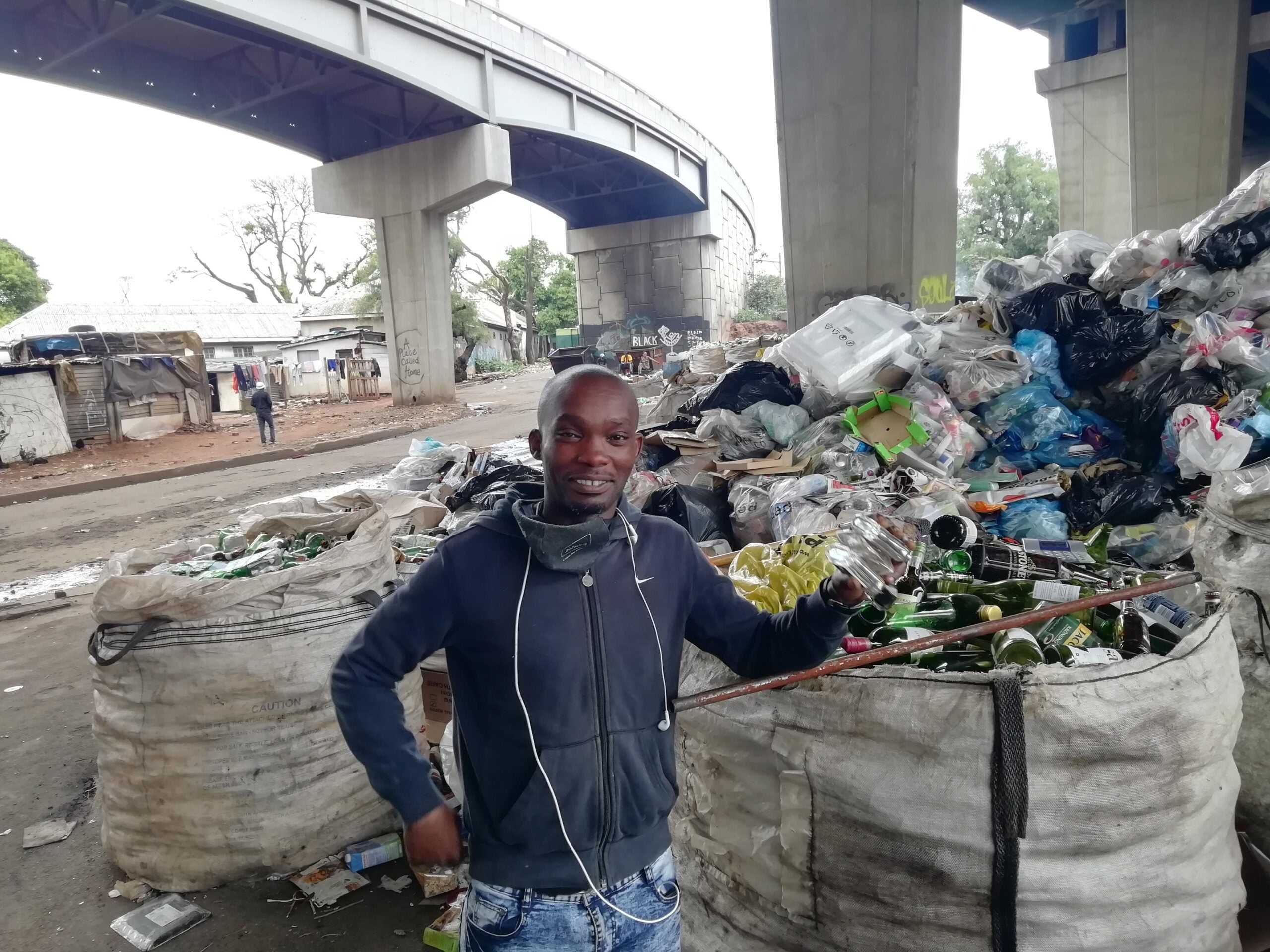 Luyanda Hlatshwayo, who works as a reclaimer, helped found the African Reclaimers Organisation (ARO) in 2016 to protect the workers’ interests. (Photo by Joe Walsh)

Underneath the M1, the main highway that intersects Johannesburg, on a previously unused piece of land just outside the city centre and bordered by the train line, lies an informal waste and recycling depot, a transfer centre as it’s known by the city’s reclaimers. It’s one of many located throughout the city, where reclaimers bring materials they have collected from household waste to sort, store and subsequently sell to recycling companies.

Reclaiming is an informal profession that has existed in Johannesburg, and across South Africa, in place of a more formal recycling system for decades. There are approximately 60,000 reclaimers in South Africa, approximately 9,000 of them in Johannesburg, and they save the country’s municipalities an estimated R750m ($48.4m) a year in landfill costs alone, let alone the additional costs of hiring companies to collect that waste.

Each day, reclaimers drag trolleys across Johannesburg in the early hours, contesting with the city’s dangerous roads and steep hills to get to the glass bottles, plastics, cans, other metals, discarded cookware or anything that can be sold for scrap in household waste and return it to one of these transfer centres. But despite the seeming chaos of the transfer centre, there is some semblance of order here: items are separated into the different areas, bags upon bags of glass bottles in one area, cardboard in another, plastics piled up in another corner. On sorting day, reclaimers sell what they’ve collected to the local recycling company. Often, they’re saving up for something – usually a trip back home for the holidays

Certain special items are separated from the bulk of the recycling, such as Jack Daniel’s whiskey bottles, as they can be sold separately to people who will fill them up and sell them. Luyanda Hlatshwayo, who works as a reclaimer and helped found the African Reclaimers Organisation (ARO) in 2016 to protect the workers’ interests, estimates that up to 80% of the Jack Daniel’s consumed in the city comes from this sort of counterfeit. He also explains that he keeps an eye out for perfume bottles as he knows someone who will buy them for a premium, provided they are etched with ‘Made in France’.

While it may make you think twice about the whisky you’re drinking, the work of reclaimers has resulted in South Africa recycling 80–90% of its post-consumer paper and packaging. The country currently recycles 46.3% of its plastics, compared with 31.1% in Europe and just 8.4% in the US. This has been achieved primarily by the efforts of reclaimers, who despite their contributions, have traditionally been shunned by the City of Johannesburg (CoJ) and looked down upon by residents. 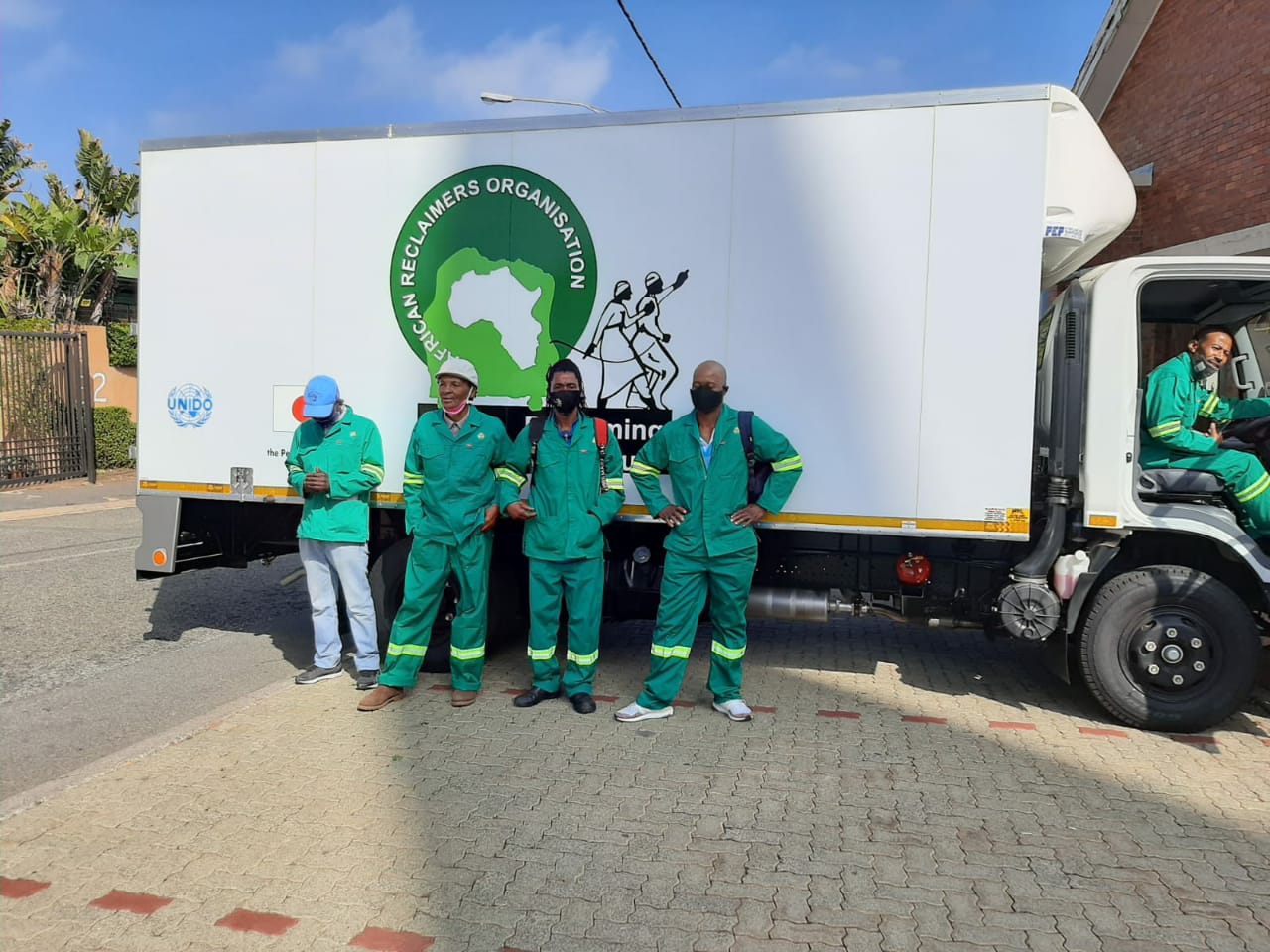 Reclaimers in front of their new rubbish truck, part of a larger effort to integrate their efforts into the city’s official waste management system. (Photo by Luyanda Hlatshwayo, ARO)

But recently, efforts have been made to try and recognise the work reclaimers do, formalise the profession and integrate them into the city’s waste management system.

‘Building an Inclusive Circular Economy: Recycling with Reclaimers in Johannesburg’ is a pilot programme that aims to centre the needs of reclaimers and their relationship with the community. It brought together the ARO, CoJ, Unilever and PETCO, the national plastic recycling industry body, as well as residents, to pay reclaimers for their work and better integrate it into the city’s waste system. It was piloted over the past year in two inner city suburbs that Hlatshwayo works in and feedback from residents about the pilot have been overwhelmingly positive.

PETCO says that residents have been generally positive about the pilot project. Eighty-five percent of residents believe that reclaimers should be compensated for their work and most feel the municipality should pay them. Workers were paid for their work during the pilot.

The pilot programme has also helped to destigmatise the industry. “Previously, residents tended to ignore or harass reclaimers,” said Belinda Booker, collections and training project manager at PETCO. “Now people greet them, separate materials for them, provide refreshments, and take time to learn more about their work and their personal stories.”

A key difference in this programme was that it was led by the industry in collaboration with the ARO, rather than being imposed on reclaimers from outside. Other efforts at aid have been less successful.

When South Africa first imposed strict Covid-19 lockdown procedures, reclaimers were left with no way of making a living. In an effort to aid them, the government offered food parcels. However, to receive them individuals needed to show their South African IDs or documents proving their eligibility to be in the country. As the overwhelming majority of reclaimers are foreigners, generally from Malawi, Lesotho and Mozambique, working in an informal industry, this proved a fruitless gesture.

“We told the minister to f**k off and take the food to his house if he’s going to ID,” Hlatshwayo bluntly describes the ARO’s response to the government. Reclaimers and the ARO relied on themselves instead, managing to raise R180,000 ($11,600) to feed workers during lockdown when they could collect but not sell their materials.

Hlatshwayo lamented other earlier initiatives by the CoJ and other organisations like PETCO, such as the CoJ Waste Reclaimers Empowerment Project from 2014, which saw 50 branded trolleys donated to reclaimers. They weighed 120kg compared with the 20kg a normal trolley does. Reclaimers couldn’t use them so quickly disassembled them up and sold them for scrap.

The ARO is clear that if the city wants to support its members it has to ask and listen to them on what they need to better do their job, not impose what they feel is the best way for the industry to work. He is keen for the city to provide better infrastructure for reclaimers including a compactor at the transfer centres, regulated prices on the materials they sell, and the legal rights and security for the land the informal transfer centres are on. The ARO’s more than 3,500 members, says Hlatshwayo, are more than ready and willing to take to the streets if they continue to be ignored by the city. They can either stop collecting waste, selling their materials or both to demonstrate the impact it would have on the city’s streets and landfills. He stresses that the city must listen to reclaimers to determine how best to support them and ultimately formal recognition and integration into the city’s waste system.

Joe Walsh is a journalist based in Johannesburg.