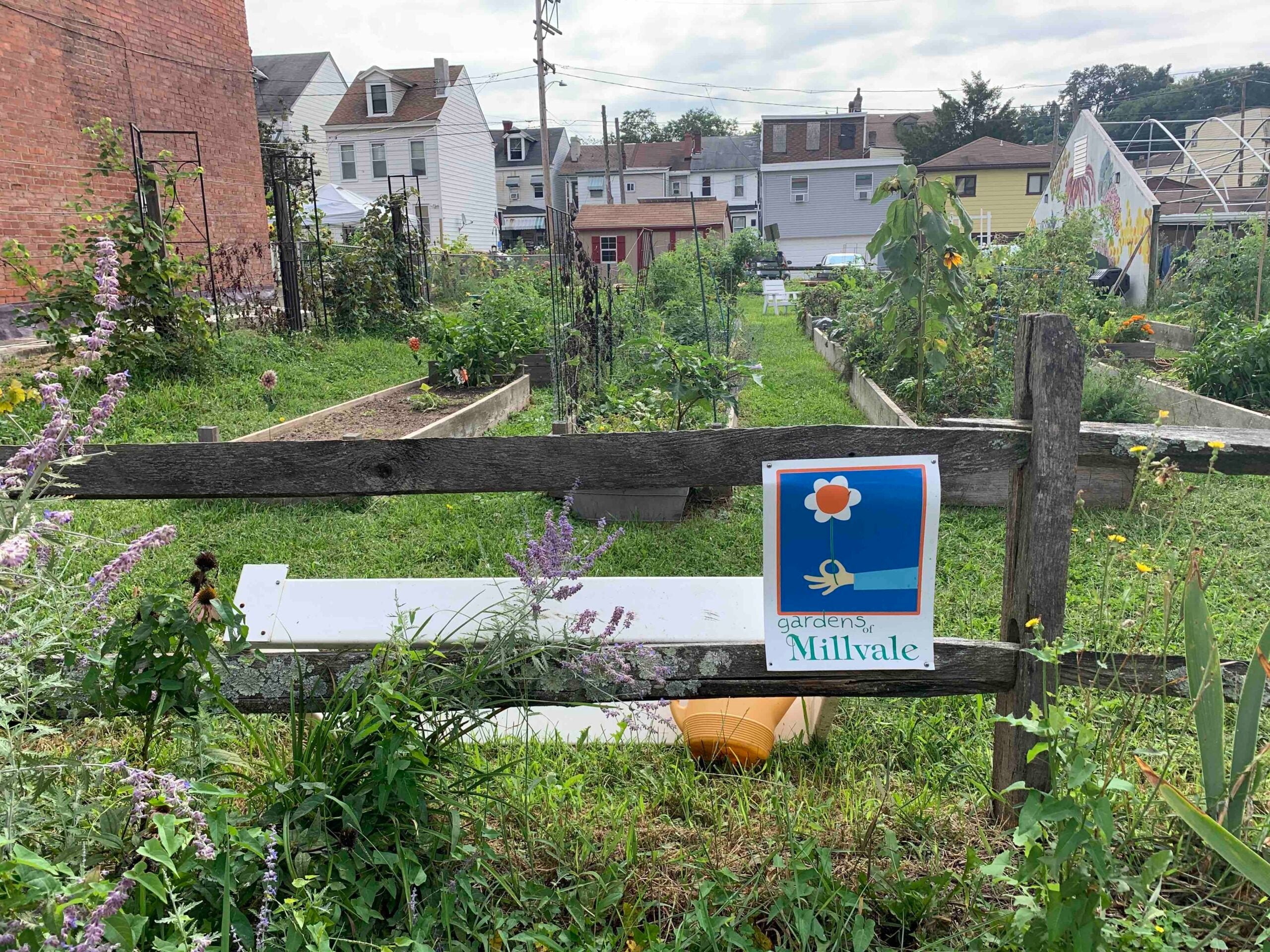 This modest community garden is just one small part of of Millvale, Pennsylvania’s commitment to becoming an EcoDistrict. (Photo by Audrey Carleton)

Nestled between green mountains in the lower valley of the Greater Pittsburgh region, separated from the city by the grand Allegheny River, Millvale, Pennsylvania, is precisely what one might picture when they think of the quintessential small town in the US. The area’s few commercial streets, a number of them cobblestone, are lined with colourful, eclectic shops. The community library is painted a bright, inviting yellow, there’s a large community garden, and a handful of the crosswalks in the approximately five-by-ten-block town centre have been painted with vivid designs. What’s slightly less obvious in all of Millvale’s charm, however, is that the town was recently certified as an EcoDistrict.

A neighbourhood-level designation conferred by a Portland, Oregon-based non-profit of the same name, EcoDistricts are regions built upon local, community-led planning with a focus on sustainability and equity. Founded in 2013, the organisation is currently working with 18 cities across the US, two of which have been certified, Millvale included. EcoDistricts was built out of a desire for a new model of environmental-justice-focused urban planning, one that recognises “that people who live in these neighbourhoods need to have a seat at the table and start to co-design strategies that have a positive influence on their lives”, says founding CEO Rob Bennett. This model helps the organisation differentiate itself from competitors like LEED for Neighbourhood Development, which is catered more towards developers than community members, he adds.

EcoDistricts also strives to place the needs of community members first and foremost in planning. Though Bennett says it’s too early to meaningfully assess the organisation’s environmental impact, many communities go into the process with ambitious carbon reduction goals, like becoming self-reliant on solar power or reducing building energy use by 25% by 2030.

Millvale has been working towards EcoDistrict status since 2013 alongside two of its neighbours – Etna and Sharpsburg – as part of the TriBoro EcoDistrict initiative. The vision, spearheaded in Millvale by non-profit New Sun Rising and sustainable-architecture firm evolveEA, among other local stakeholders, was to achieve sustainable community development by focusing on tangible quality-of-life improvements in six realms: equity, food, water, energy, air quality and mobility.

Millvale wasn’t always notable for its small-town charms. It has a long history of economic trouble. Like many communities in the Pittsburgh region, it hit hard times after the decline of the steel industry, and residents were left to pick up the pieces on their own. At one point, nearly a quarter of its population was living below the poverty line. Millvale lacks a grocery store and is a USDA-identified food desert. And its geographic positioning at the bottom of two converging mountains, next to a river, makes the region vulnerable to heavy rainfall. As a result, the community has developed a fraught relationship with water.

Millvale turned to EcoDistricts for help in changing that trajectory when, in 2013, along with Etna and Sharpsburg, it adopted the non-profit’s process of sustainable, ground-up community planning. EcoDistricts worked with non-profit community leaders in the town to develop a series of multifaceted plans that included tangible quality-of-life targets, tasks and performance indicators.

New Sun Rising, alongside other Millvale community stakeholders, then got to work: they built a public community garden to address the desire for fresh produce within the community in the absence of a grocery store. They converted an abandoned Moose Lodge into a Food and Energy Hub with a solar-panel microgrid, a backup source of energy for the building in the event that floods cause power outages. Etna, a community facing similar flood risks, set its own goals under the same EcoDistrict framework, including building a community garden of its own and creating a green path that runs through the 506-acre town to encourage walking.

Though assisted by the guidance of EcoDistricts, the towns had been working on quality-of-life improvement efforts well before joining forces with the non-profit in 2013. Brian Wolovich, Triboro EcoDistrict director at New Sun Rising, says he and other residents have always had a passion for improving their community, but the EcoDistrict framework helped his team focus their ideas into more tangible goals.

“One of the things they’ve done in the first iteration was kind of look at community-scale sustainability through the lens of food, water and energy,” Wolovich says. “What does that look like here? Why should we focus on those areas? What does that mean to us? What are the assets? What are the challenges that we have?” 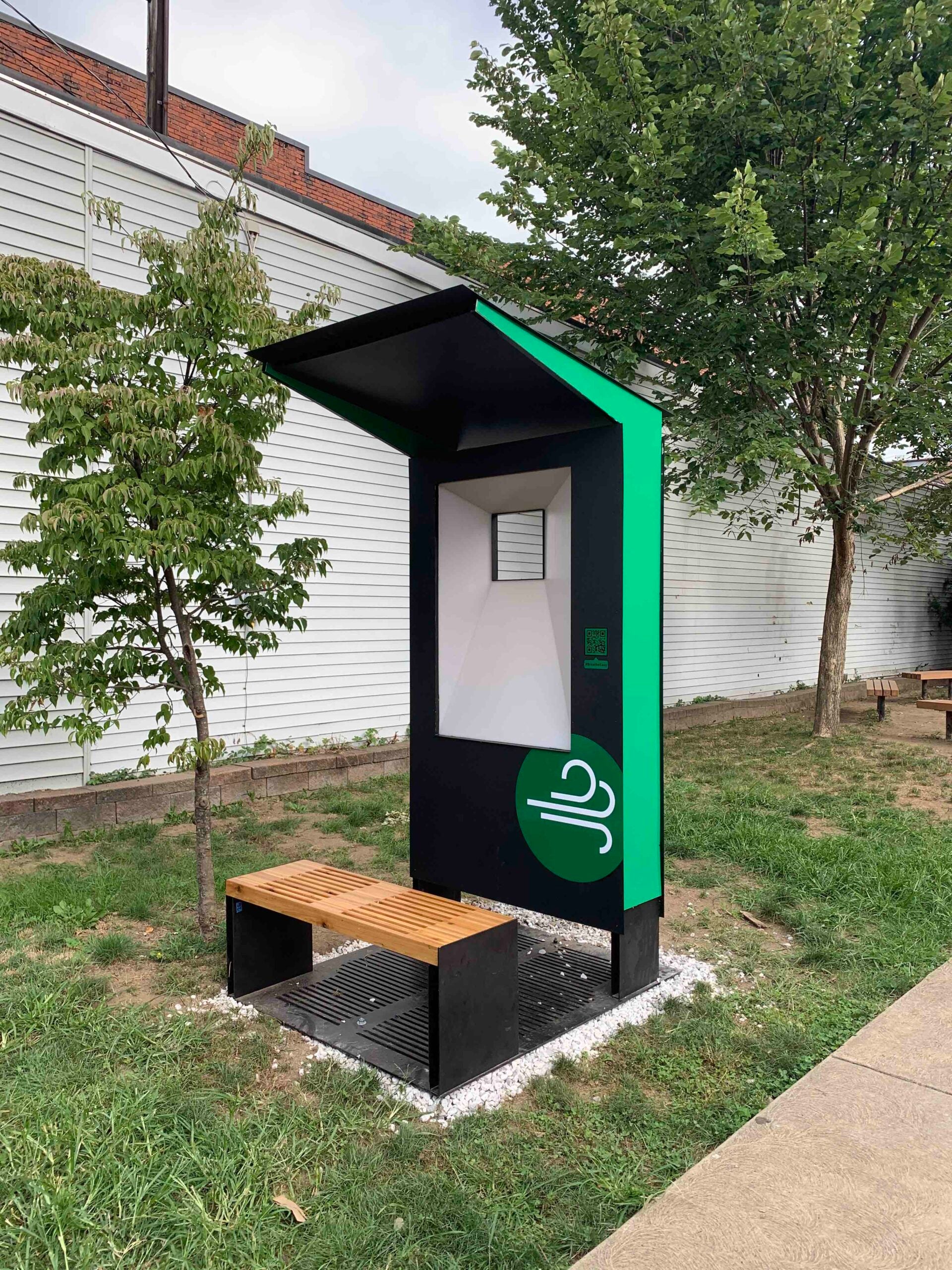 Due to its notoriously poor air quality, the Triboro EcoDistrict is installing air-monitoring stations that alert passers-by as to how safe it is to breathe outdoors at any given moment. (Photo by Audrey Carleton)

Even with certification in hand, the Triboro EcoDistrict is gearing up for at least another five to ten years of hard and meaningful work. Next on the to-do list is installing air-monitoring stations that display a colour-coded series of lights alerting passers-by as to how safe it is to breathe outdoors at any given moment. (The Pittsburgh region as a whole has notoriously poor air quality – a result of frequent oil and gas drilling and industrial activity throughout south-western Pennsylvania.) The Triboro team also hopes to improve public transit and cycling infrastructure as part of a greater effort to increase mobility within, and between, the towns.

A more equitable approach to planning

Central to adopting these changes is securing community buy-in. Alexis Boytim, director of the Etna Community Organisation and the sole paid staff person leading that town’s EcoDistrict effort, has spent countless hours arranging community meetings to discuss Etna’s plans and goals and to come to a consensus with its residents.

Boytim strives to make these meetings as accessible as possible by offering attendees food and childcare. She has had relative success so far, estimating that at least 300 residents – approximately 10% of the town – have come to an EcoDistrict community meeting at one point or another. But understanding that trust and community consent are central to the bottom-up, equity-driven planning framework EcoDistricts put forth, she’d like to see this number grow.

“It was an intentional process that engaged a diverse group of community members, diverse age range, backgrounds,” she notes.

Boytim admits she’s had a leg-up in getting Etna residents excited about hyperlocal planning processes. As a smaller community with a low amount of natural transience compared with larger cities, Etna is already “centred around helping one another”, she says. Turning a community into an EcoDistrict is arguably much easier when residents have an existing level of rapport as is often the case in small towns.

Securing buy-in on sustainability measures can also be challenging when eco-friendly or carbon-neutral planning is hard to notice. Millvale and Etna, for example, don’t look notably “greener” than the average town, save for a bit of signage. And neither does Lloyd, a neighbourhood in north-east Portland that is awaiting its EcoDistrict certification, according to the effort’s executive director, Sarah Heinicke. Despite proudly advertising on the Lloyd EcoDistrict website a goal to become “the most sustainable neighbourhood in North America”, visibility is a central challenge in garnering widespread interest, she says.

“Many of the challenges that we have are: how do we externalise the fact that this is an EcoDistrict when many more hard-hitting projects that we do aren’t visual at all?” she adds. “Energy efficiency doesn’t look like anything. Waste prevention is the absence of stuff.”

The team behind the EcoDistrict effort in Capitol Hill, Seattle – an area that made headlines in June when a few of its blocks were occupied for weeks during protests over racial injustice and the police killing of George Floyd – has had to address similar challenges around visualising environmentally friendly urban planning. Led by longtime resident and restaurateur Donna Moodie, the Capitol Hill EcoDistrict team is focusing on creating affordable green housing, developing accessible healthcare infrastructure (including a school-based health centre in a local elementary school with a history of health problems) and constructing storm water management systems throughout the neighbourhood.

Moodie says she and her staff so far have been “excellent at facilitating community conversation”, in part because of her many connections in the area as a former small-business owner. Covid-19 has forced them to get creative, however; in the absence of hosting large community forums, they’re now conducting socially distanced, small-group walking tours of the neighbourhood. Though it is a time- and labour-intensive endeavour, she says she wouldn’t do it any other way.

“There’s a lot of ways you can engage the community,” Moodie says. “It’s definitely an effort, and it makes the process longer, [but] it makes more people feel like they’ve bought into what’s happening.”

Keeping neighbourhood tours free for the Capitol Hill community is part of a broader goal to “green” it inclusively and equitably – that is, making community improvements without inevitably displacing residents or businesses. Bennett notes that this is a central challenge to the work he does for EcoDistricts at the national level, and it’s a key reason the organisation focuses so strongly on equity in its planning frameworks.

In Capitol Hill in particular, where creating more affordable housing is a central part of the EcoDistrict plan, Moodie says she plans with the interests of residents top-of-mind, so getting communities on board is essential. She also strives to ensure that any public-area improvements – building out green space, community gardens and the like – are accessible to all. “One solution we have when everyone doesn’t show up to the table for the conversation is asking why,” Moodie says. “What could we have done differently to make more folks feel welcome and, perhaps more importantly, relevant?”

The importance of strong leadership

For as many communities that remain devoted to building EcoDistricts despite all the grunt work it requires, there are many that haven’t made it quite as far. In Portland, for example, a number of the city’s EcoDistricts that had initially launched around the same time as Lloyd’s decided to call it quits. So despite the ever-worsening threat of the climate crisis and its implications for US cities, Lloyd is now the only neighbourhood in the city working towards becoming an EcoDistrict.

Central to longevity in this process is strong leadership, community will and continuous momentum. In reflecting on her own work, Heinicke also stresses the importance of relying on what’s proved to work.

“Try to apply what others have already done to get you there further, faster,” she says when asked what advice she would give to towns working on green urban-planning projects. “None of us has the time to sit around and turn this into an academic exercise. The work is real; it has to get done. If we’re going to be doing this and really making a difference, you have to do it yesterday.”

Audrey Carleton is freelance journalist based in Brooklyn.