Will Butler-Adams is not a “hardcore cyclist”. But, according to the CEO of folding bike manufacturer Brompton, “that’s exactly the point… I’m not, but I bloody love my ‘Brommie’. This little thing is a game changer for people living in cities.” 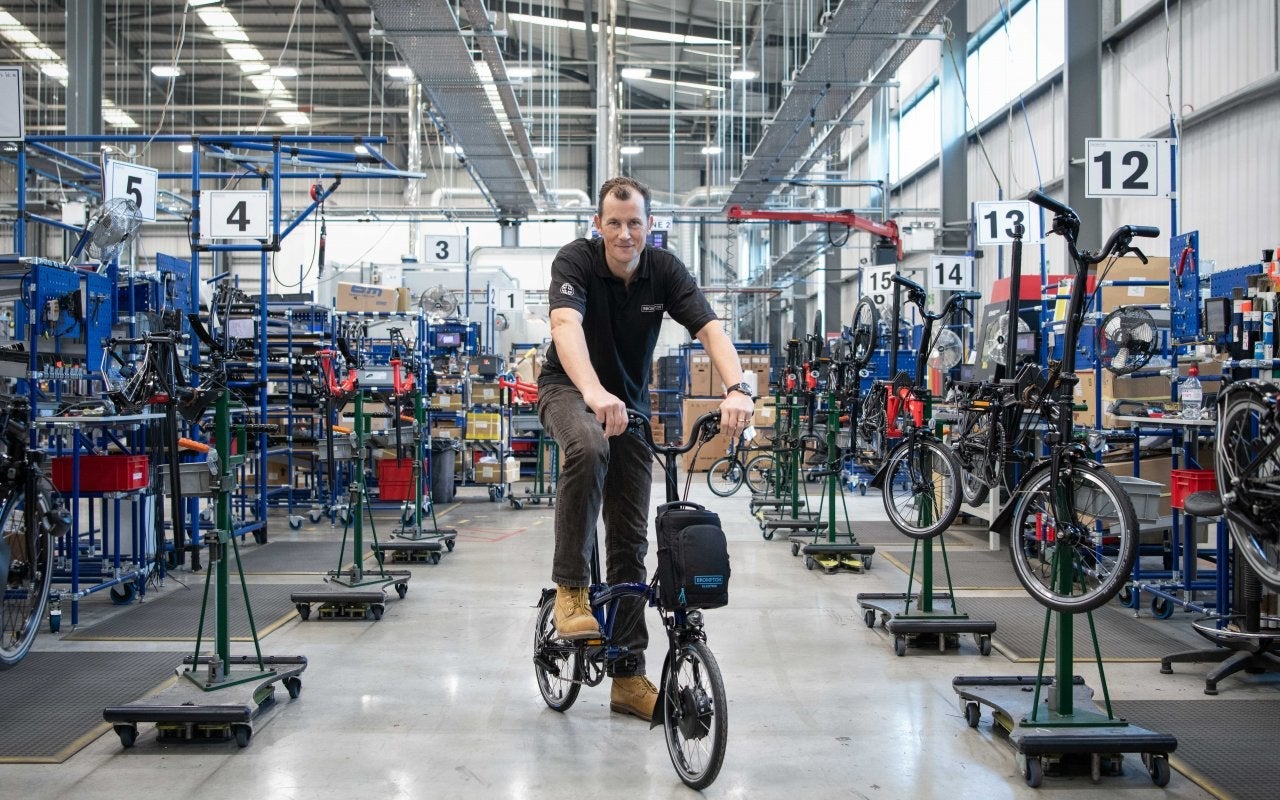 Butler-Adams, who completed an integrated master’s degree in mechanical engineering and Spanish at Newcastle University, says he “sort of fell” into the company. Studying in Valladolid, Spain, he worked for Nissan in Madrid as part of his course’s third year. After graduating in 1997, he took up management roles with chemical companies ICI and DuPont in the Teesside area of the UK. In 2002, a chance encounter with Brompton’s then-chairman Tim Guinness on a London bus led to a “chat with the bike’s inventor [Andrew Ritchie]” and eventually a job offer. By 2005, he was the company’s engineering director. He took over from Ritchie as CEO in 2008, and since then Brompton has grown from a company with a £2m turnover and 27 staff to one with a £70m turnover and 600 staff.

Butler-Adams was used to working with and around “world-class” engineering. He admits he wasn’t initially impressed with the Brompton operation – specifically its cramped and cluttered warehouse in Brentford, which had “very little” in the way of machinery. “It was hugely inefficient. Walking around the factory felt like I’d travelled back in time,” he recalls.

The company was making around 6,000 bikes a year when Butler-Adams joined. It was profitable, he says, but unable to satisfy the demand he thought its “clearly great product” was bound to create. A change in strategy, including outsourcing some of the “non-core” parts of the manufacturing process, has led to rapid growth. As of 2020, Brompton makes approximately 75,000 bikes a year and is exploring the electric market.

Butler-Adams, whose family are originally from North Yorkshire, confesses he has never been a “London guy”. He is happiest “when in mountains and wilderness”, and yet “this weird little bike made living in London a complete and utter blast… You know, unlike my friends, who were stuck on the Tube or on a bus, I was just whizzing across the city. I knew every backstreet, every canal, or park. It made urban life fun. And, you know, I got pretty fit, too. This product genuinely makes people feel better, and that’s very addictive. That’s why I’m still here today.”

Brompton bikes are made of a mix of steel and titanium and can fold compactly to fit in a luggage rack on a train or in the boot of a car. They retail from £850 (the B75) to £3,500 (full-spec electric). Butler-Adams says the prices are a reflection of quality, and he rejects the idea that they are inaccessible. Holding up his smartphone, he asks assuredly: “Do you have one of these?”

He doubles down. “People will find a way of affording something if it’s useful.” A Brompton bike, Butler-Adams points out, isn’t “some frivolous pair of trainers that costs 150 quid. This thing is actually a transport tool. It is my life. I don’t go to the gym. I don’t pay for the Tube. That’s how I live – on my bike. It lasts 20 years. The thing is awesome.”

Just as phones or cars are available on finance, Butler-Adams says that many similar instalment schemes are available for Brompton bikes and believes they are a worthwhile investment. “There are plenty of interest-free options. If that means you pay 30 or 40 quid a month… It’ll change your life for the better.”

Butler-Adams says the target audience for Brompton is “anyone that can ride a bike”. Regular cyclists, he estimates, make up “around 4% of Londoners”, but Brompton is as interested in “the people who know how to ride a bike, whose parents ran behind them and felt that they’d be crap parents if they didn’t… That’s not 4%, that’s 96%. Why aren’t they riding a bike? What’s stopping them? Is it confidence? Is it fear? How do we find ways to make cycling easier?”

Butler-Adams thinks that the coronavirus pandemic could catalyse bike usage. The lockdown restrictions have led to many more people working from home and travelling less, and made policymakers “rethink” transport, both in terms of its environmental impact and in relation to public health. “We do not need congested roads, five days a week, in rush hour,” he says. As people travel into city centres less frequently, Butler-Adams argues that cycling offers a “less pollutant, healthier and more cost-effective way” of making those journeys.

He lauds the likes of Anne Hidalgo, the mayor of Paris, who has invested in cycling infrastructure – explicitly at the expense of motorists – and would like the UK to follow suit. “She has put in 650km of cycle lanes, and she’s taken out 80,000 car parking spaces. You need to rethink how you want society to live. And on the basis that, in the world, most of society live in cities… That’s where the densest congregations of human population are. If human beings are the apex [species] on the planet – which they are – why would you design a system where the places where the most humans live are in the unhealthiest, most polluted areas? It’s going to lead to much higher rates of mortality, of obesity, much higher rates of poor mental health, and the poorest air quality.”

There is “absolutely no need”, Butler-Adams adds, to have a “two-tonne square piece of metal” roaming around a city centre. “If a car hits a child, it will kill them. If it hits a person, it kills them.” Clearly exasperated, he raises both of his hands. “Just take it out. Take it out now.”

That said, Butler-Adams is not anti-car. He accepts there are times when one is necessary and has his own Nissan Leaf, a battery-electric vehicle, but, particularly for short-range trips, he would prefer to cycle. “It’s good for my brain, as much as anything else,” he says.

According to Butler-Adams, Covid-19 has led to the “acceleration of the humble voter”. As the status quo around work and travel has been turned on its head, more people have “got a taste” for a flexible lifestyle and quieter roads. “People have realised they have a right to live in an environment that’s good for them.”

For Butler-Adams, investing in cycling infrastructure in the UK makes total sense. “It’s not cheap,” he admits, “but it’s a lot cheaper than HS2. You know, it’s a lot cheaper than sticking another Underground line across London, to shave off, what, a few minutes of travel time? Crossrail has cost billions and billions and billions of pounds. And it’s still not done. And it’s just in London, anyway. You could transform every city in the UK [with cycling infrastructure], and you could transform the lives of people for the next 50 years. You could do that for less than £10bn in total.”

While Butler-Adams certainly has views on politics – he describes Brexit as a “pain in the arse” from the point of view of Brompton’s supply chain – he insists that investing in cycling, and the issues that such action aims to address, are not bound by any particular party’s ideology. Pressed as to whether he thinks a Labour or Conservative government is more likely to recognise the value of cycling, he won’t comment. “It doesn’t matter. I’m not a lobbyist. The point here is that there are certain things – like public health or climate change – that affect everyone. Any party in power has to recognise that.”

The “reality” of climate change, Butler-Adams says, is that humans all over the world need to be more efficient about how they use produce and use energy. Light, electric vehicles are key to lowering carbon emissions, he notes. “In general, we need to consume less. One of the biggest consumptions [of energy] we have is driving around in a two-tonne vehicle to carry an 80-kilo human being.”

And where do bikes fit in? “A bike might weigh 14 kilos, but it can carry an 80-kilo human. Now you can extrapolate that and say that instead of having a white van that weighs a couple of tonnes, why not have a cargo bike that weighs 40 kilos? In any case, once you hit a city boundary, something that weighs several tonnes… That’s not the right vehicle. If you hit someone on a 14-kilo bike, travelling at 15 miles an hour, yeah you might hurt them. But at least you’re not going to kill them.”

Is more infrastructure alone enough to increase enthusiasm in cycling? Or do people need active incentives? Butler-Adams says that policies, such as tax breaks, “are good and can help but aren’t the be all and end all”. If the cycling infrastructure is well-built and high-functioning, he explains, then uptake will happen naturally. “That’s numero uno,” he says. “Of course, you can do the other stuff, on top of it, but that’s the main thing. If every school had safe cycle lanes within a one or two-mile radius, then every parent would take their kids to school [on a bike].”

True political leadership, Butler-Adams suggests, means having the foresight to make a “potentially unpopular decision” on the basis that in the long run it will yield more benefits than problems. “Vocal minorities may push back, but if something, like cycling, can be proven to be in the public interest, which it is, then you’ve got to press on with it. It’s healthier and it’s cleaner.”

Rohan Banerjee is a special projects writer at the New Statesman.
Websites in our network