One of the beacons of UK social housing policy, the legislation from 1919 that became known as the Addison Act after its sponsor, the minister of health Christopher Addison, imposed for the first time a duty on councils to build good quality and affordable housing. But, as with most policies, it was only partially effective. Today, 100 years later, housing provision in the UK remains a major challenge, mired in problems of affordability and availability.

Britain is a home-owning nation, where housing is considered an investment asset for individuals rather than a social asset for society as a whole. This is unfortunate. As an investment, buyers pour their wealth into property on the understanding that they will benefit from rising values. The resulting price distortions lead to – among other things – localised skill shortages as key workers, teachers, nurses, firefighters are forced out by rising prices, unable to rent or buy.

But there are alternative arrangements to the hybrid housing economy that has developed in the UK – a mix of private sector ownership and renting and of housing provided by housing associations and (historically) by councils.

Housing as a social asset

Take Singapore, for example. Singapore had its own “Brexit” in 1965 when it separated from Malaysia. In 1960 the Singapore Housing and Development Board (HDB) was formed to provide affordable and high-quality housing for residents of this tiny city-state nation. Today, more than 80 per cent of Singapore’s 5.4m residents live in housing provided by the development board.

These are issued by the state on 99-year leaseholds, and the value of the home depends on the inherent utility value of the property (size, type, location), with financing readily available, including that provided by the Central Provident Fund (CPF). The CPF is a social security system that enables working Singapore citizens and those with permanent resident status to set aside funds for retirement. It is a compulsory savings scheme, which includes contributions from employers, to set aside funds for healthcare and housing costs in later life.

Property buyers in Singapore can fund the purchase of a development board flat with a bank loan, a loan from the HDB, with cash, or with funds drawn from the CPF. In a similar way to the leasehold system in the UK, the resale value of an HDB flat deteriorates as the lease end date approaches, in this case when the lease drops to under 30 years. As is the case in the UK, difficulties arise in trying to finance homes with short leases. However, the HDB leasehold system is different as the “owners” have bought only the right to use the flat – the property title and ownership remains with HDB.

Additionally, the development board prohibits Singaporeans from owning more than two residential units at any time. In the case of an inherited flat, ownership is only allowed if the inheritor disposes of their existing private or public residential property within six months of inheriting it.

The HDB remains by far the dominant national housing provider, building and owning most residential housing and playing an extremely active role. Private sector housing is available, but it is much more expensive. 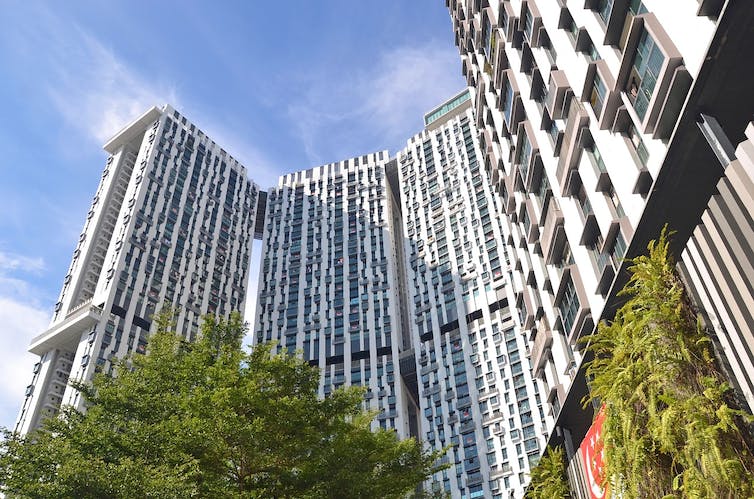 A lesson in long-termism

The differences between the approaches in the UK and Singapore are extreme. In the UK, council housing is considered to be a public sector cost – a burden to the taxpayer. For many people this is housing provision of last resort. In Singapore it is treated as an asset to the public purse, as well as a social asset – and carries no stigma, nor is seen as something to be avoided if possible. The UK’s mixed housing economy results in major social and economic distortions, whereas Singapore invests in housing precisely to avoid or counter those distortions.

In the UK, with the exception of the New Towns, housing has tended to involve creating individual assets rather than an approach based on place-making – creating neighbourhoods and communities. Singapore’s HDB housing units are built in HDB towns with housing units integrated with amenities including clinics, community facilities such as parks and sports facilities, and retail. As Singapore has developed economically, so HDB has also begun to produce more upmarket housing.

Transferring the solution that works for tiny Singapore to Britain would be impossible, but perhaps there are lessons to be learnt regarding a longer-term approach to meeting housing need.

One is to adopt a more integrated approach to housing: the conversation in Britain is dominated by the number of units provided and at what price they are sold, but a more sophisticated discussion would include who that housing is aimed at, where it needs to be, and how it is designed in order to create a sense of place. As important is the need to ensure housing is completely integrated into existing urban infrastructure, including roads, public transport, schools and health services.

The fragmentation of housing ownership in the UK makes it extremely expensive to redevelop or make major modifications to existing residential areas – each owner would have to be persuaded to modify their property or sell up as part of a land assembly process. In Singapore, with a history of intensifying land use and population density, HDB ownership means it is able to rebuild old estates and maintain and develop the extent of integration with social amenities.

Major innovations are occurring that will transform the ways in which we live – and these must be reflected in our housing: more electric vehicles and driverless cars, home working, e-commerce and ever-increasing population densities in cities. The integrated approach of HDB means Singapore is able to take a long-term strategic approach to these changes – and so more easily ensure that residential areas have all the public amenities, public services, retail and transport infrastructure required for them to thrive. The UK would be wise to watch and learn.

John Bryson, Professor of Enterprise and Competitiveness, University of Birmingham.