The UK has made much progress in its efforts to clean the air of toxic pollutants. But while the thick, dirty haze of the 1952 great London smog no longer fills the city streets, air pollution remains a silent killer.

In the UK, poor air quality is responsible for some 40,000 deaths each year. It has been linked to diseases such as cancer, asthma, stroke and heart disease, diabetes, obesity and dementia. The health problems from exposure to air pollution are costing the nation more than £20bn every year.

Dirty air also causes acid rain, which affects historical monuments, land and aquatic systems, and the excessive release of soil nutrients, which stimulates algae growth in lakes and water courses. It can even form a ground-level ozone gas that damages plants, crops and forests.

The latest update to the UK national air pollution statistics shows that there has been a long-term decrease in emissions from power stations, transport, household heating, agriculture and industrial processes.

Over the past four decades, emissions of key pollutants such as sulphur dioxide, nitrogen oxides, non-methane organic compounds and particulate matter have fallen by between 66 per cent and 92 per cent. But emissions of ammonia from the agriculture sector rose by 3 per cent between 2015 and 2016. This has been blamed on manure from larger dairy herds and using fertilisers.

Despite the decline in air pollutants, the UK remains in breach of European limits on nitrogen dioxide (NO₂) in 16 cities, mainly due to diesel fumes from road transport. In 2018, London reached its legal air pollution limit for the whole year within one month: on Brixton Road, South London, NO₂ levels exceed average hourly limits 18 times – the maximum allowed under European air quality rules. 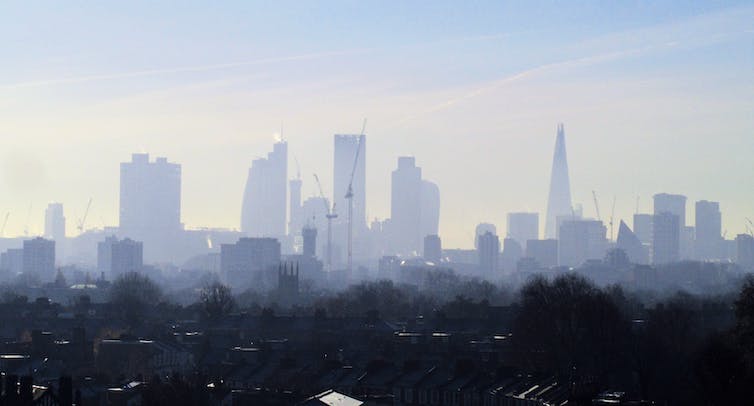 If air quality is to improve, people must change the way they move around their cities. The UK government intends to ban the sale of all petrol and diesel cars and vans from 2040. The rigging of emission tests by car manufacturers has already resulted in consumers ditching diesel – sale of diesel cars fell by 25 per cent in January 2018 compared with the previous year.

In contrast, sales of electric vehicles are growing – though this trend will need to accelerate if 60 per cent of all new cars and vans are to be electric by 2030, as the UK Committee on Climate Change hopes. While electric vehicles will improve air quality by reducing NO₂ emissions, they still produce half of all transport-related particulate matter emissions because of the fine particles released from their brakes, clutches and tyres, as well as the dust thrown up from the roads.

Having fewer cars on the roads would be even better than having cleaner cars. Attitudes may be changing, alongside the rise of the sharing economy. Younger people are using apps to take part in car club schemes, ride-sharing and car-sharing as a way of opting out of the expense and hassle of owning a car. But there’s also a clear need to provide infrastructure that encourages more walking, cycling and public transport.

If the British people want a more radical solution, then they could consider making public transport in cities free. This is already happening in Seoul on days with severe pollution. Germany is reported to be mulling over plans to make public transport free to address air pollution and reduce the number of private cars.

But this doesn’t always work as planned: one analysis of a fare-free public transport scheme in Tallin found that the increase in use was largely from people who normally walk, rather than drive a car.

While the overall drop in air pollutants is welcome, the UK needs to make further progress to ensure that everyone can breathe clean air.