Each year, tens of thousands of people in the UK die early due to air pollution, which is linked to asthma, heart disease and lung cancer. The health risk presented by air pollution depends on how much dirty air we breathe over time.

Pollution levels in UK cities regularly exceed the limits set by the World Health Organisation. But people’s exposure to pollution can vary greatly between people living on the same street, or even the same house.

Currently, health authorities estimate exposure to air pollution based on outdoor pollution at a person’s home address. But we don’t just sit outside our front doors all day – we each follow our personal daily schedules. The environment at home, in transit and at work or school all affect our exposure to pollution. Knowing this can help governments to create more effective policies and provide better advice to the public on how to reduce their exposure.

By equipping volunteers with portable pollution sensors, scientists have shown that exposure to air pollution during the day can vary substantially. For example, commuting during peak hour can account for a significant proportion of the pollution we’re exposed to – even though commuting only takes up a small part of our day.

By contrast, being indoors is often associated with lower exposure to pollution, because buildings provide some protection against outdoor pollutants. But gas cookers, wood burners and household cleaning products can also create high levels of indoor pollution.

With all these different sources and levels of pollution around us, our daily activities and habits have a big influence on how much polluted air we breathe. Even couples who live together can have different exposures: a person who stays at home may experience up to 30 per cent less pollution than their partner who commutes to work. 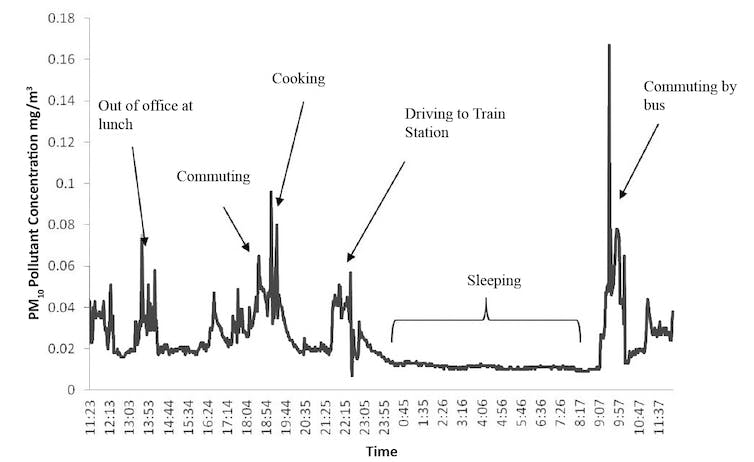 A 24-hour measurement of a person’s pollution exposure, which varies throughout the day. Image: McCreddin et al./creative commons.

Small changes in our daily routines can significantly reduce our exposure to air pollution. In a study in London, participants were able to decrease their exposure during commuting by 25 per cent to 90 per cent by choosing alternative routes or modes of transport. Active commuters who walk or cycle are usually less exposed to pollution than people travelling by car or bus – this might be because vehicles travel in a queue, so air pollution from the vehicle directly in front gets drawn in through ventilation systems and trapped inside. The air is also much cleaner on overground trains than on the underground.

Displaying public information about pollution hot spots and ways to avoid them can help. The Wellbeing Walk is a signposted backstreet walking route taking ten to 15 minutes between London’s Euston and King’s Cross stations, which exposes walkers to 50 per cent less pollution than the main road. Since its launch in 2015, the number of people taking the healthier path has tripled. There need to be many more initiatives like this in cities.

Being able to tell when and where people are most exposed to pollution makes it possible to compare the benefits of different solutions. That’s why scientists have created computer models to simulate different scenarios. By combining information on outdoor pollution, pollution on transport and people’s travel routes, these models help us understand how people’s movements contribute to their personal exposure.

Computer exposure models for cities, including London, Leicester and Hong Kong among others, are beginning to give us a better picture of how people are exposed to harmful pollution. But the answers they provide are often complicated.

For example, the model for London suggests that on average citizens are exposed to less pollution than previously estimated. But many individuals still experience extremely high pollution during long periods on transport – so a lengthy commute by car, bus or underground could mean you’re among the most affected.

What’s more, the model does not yet account for pollution created indoors through cooking or wood burning. Including these additional sources of pollution may well shake up the results.

The UK’s clean air strategy aims to halve the number of people exposed to particulate pollution above World Health Organisation guidelines by 2025. But surprisingly little is known about pollution levels inside our homes, schools and workplaces. If the strategy is to meet its goal, the government will need more data and better methods to estimate people’s exposure to air pollution.

Any model needs to be confirmed using actual measurements, to ensure we can trust what the model predicts about our exposure. Although the technology is advancing, portable pollution sensors are still bulky and heavy. Recruiting volunteers to carry these sensors wherever they go can be difficult. Phone-integrated sensors could make this easier in the future, but their reliability is still debated among scientists.

Improving outdoor air quality is currently a top priority in cities across Europe – and rightly so. But measurements and computer models are indicating that our exposure to pollution is much more varied and complex than currently estimated. We should build on this knowledge to develop measures that deliver the greatest reduction in human exposure and empower citizens to make healthier choices in their daily routines.