The northern suburbs of Toronto are in a period of great transformation. Infrastructure development and new private investments are contributing to the growth of the communities of Vaughan and Markham, two urban cores of York Region to the north of Canada’s biggest city.

These towns are in the middle of a suburban growth that is changing their environment towards a more urban and less rural landscape. While Vaughan is building a Metropolitan Centre also thanks to the opening of a new Toronto Transit Commission subway station, Markham has turned into a new venue for both private and public investment in the almost never-ending urban development of the Greater Toronto Area.

They’re both what are known as boomburbs: suburban communities in the midst of tremendous growth that were rural areas not so long ago, and aren’t the core cities in their metropolitan areas. 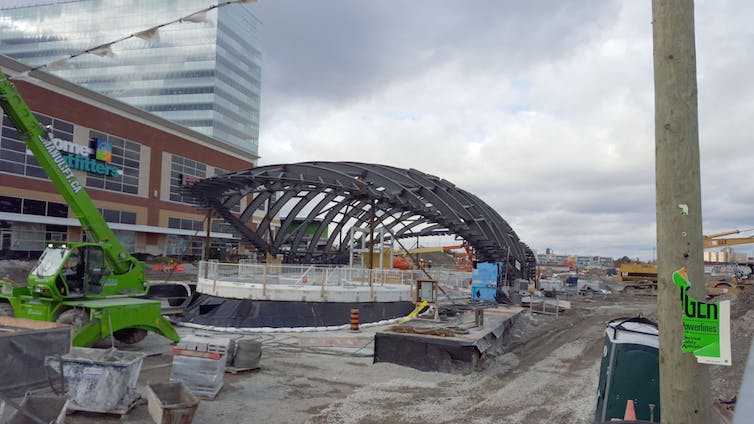 Vaughan and Markham are no longer merely suburbs of Toronto, but are becoming part of the Torontonian “edgeless city” due to the constant urban expansion.

A “growth plane” for the Greater Golden Horseshoe area, comprising the portion of southern Ontario that envelops the western end of Lake Ontario, was drawn up in 2017. Here, Vaughan and Markham stand at the boundary of what’s known as the Greenbelt area, as shown by a map created by Neptis Foundation, an independent foundation based in Toronto that conducts research and spatial analyses of Canada’s urban regions.

At the same time, Vaughan and Markham are the main engines of the population increase in York Region, which, according to forecasts by Hemson Consulting (a policy and planning analysis company), is expected to grow from the current 1.1m people to 1.5m by 2031.

In more detail, Neptis Foundation shows how the red line of designated urban expansion land sharply crosses both Vaughan and Markham, as the map below illustrates: 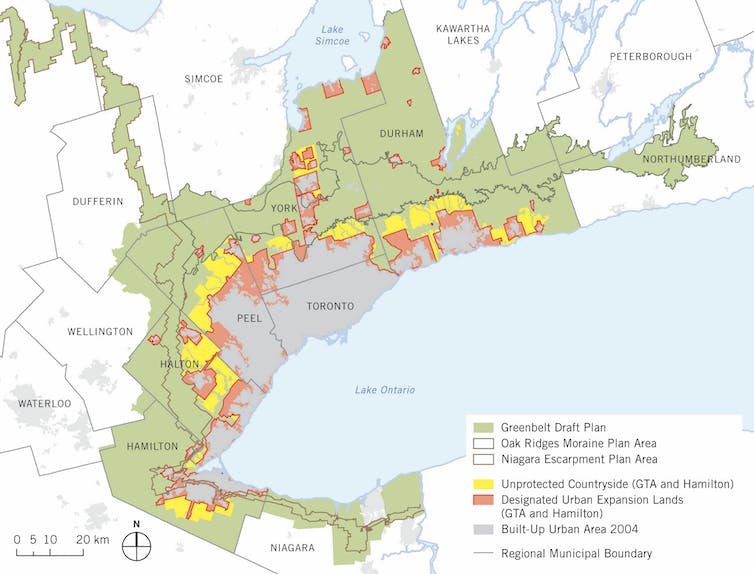 The Urban Fringe in GTA and Hamilton. Image: Neptis Foundation.

The “growth-machine theory” may be useful to understand the expansion of Vaughan and Markham. In their classic Urban Fortune (1987), Harvey Molotch and John Logan stated that the political and economic essence of any given locality is growth and a common interest in local initiatives of social and economic reforms, at least in the American context.

Given that Vaughan and Markham represent two satellite cities of Toronto, I argue that their current expansion represents a manifestation of the growth machine theory as suburbs are transformed into cityscapes where pro-growth planning and public-private investments play a fundamental role.

In November 2015, the City of Vaughan approved a Community Improvement Plan (CIP) to encourage the development of the Vaughan Metropolitan Centre.

Two years later, the opening of the TTC Line 1 subway extension represents the first step towards the revitalised Vaughan downtown, as well as a new gateway to downtown Toronto. Vaughan Metropolitan Centre, where the subway station is located, will be a new inter-modal public transit system, able to connect the overlapped transport networks of Toronto, the GTA and York Region.

But mostly, it will be the venue of new prestige offices (KPMG is going to have new headquarters there), hotels and retail opportunities, as this video by the City of Vaughan illustrates:

It’s a modern town within the town, located at the southwestern edge of the city. The forecast for this massive project is illustrated in the seductive video above that imagines a dreamy future for Vaughan, the fastest-growing municipality in all of Canada between 1996 and 2006, achieving a population growth rate of 80.2 per cent, according to Statistics Canada.

But what will be the consequences of this new enclave of Vaughan? Will the city experience gaps between social classes due to the growth mismatch between this brand new area and some of its outskirts, including the Italian ethno-burb of Woodbridge? Will the cost of living increase in the entire community of Vaughan?

Some of these questions are also key issues in Markham’s development.

My Facebook timeline, according to both my interests and “likes,” is constantly displaying a Toronto Star ad. When I decided to click it, I was a little surprised: the link sent me to the interactive page Creating a Community, a fancy website sponsored by BILD (the Building Industry and Land Development Association) that provides detailed information about the development of Markham, framed under the keyword “community”/

Markham’s population grew from 208,615 inhabitants in 2001 to 328,966 in 2016, and it’s now statistically the most diverse community in Canada, according to urban planning experts Roger Keil and Jean-Paul Addie. Markham was a rural area until 25 years ago, and has rapidly morphed into a new city.

On the Creating a Community website, the meteoric growth of Markham is summarised in a timeline in which the partnerships among institutions, the private sector and citizens are seen as successful drivers of the community-building process. Infrastructure development and brand new high-rise buildings seem to represent the main efforts to improve Markham’s status within York Region, according to this Toronto Star video:

However, attracting higher economic classes than those who have historically populated the town seems the main reason behind the emphasis on supposed community-building, albeit some developers pointed out the aim of “keeping people in Markham”. A Facebook comment in response to the ad by the Toronto Star reveals a certain unhappiness felt by Markham’s current residents in the face of so much dramatic change:

The development of Markham seen by a citizen. When Facebook is the expression of citizens’ unrest. Image: Facebook.com.

This comment shows how tricky “community-building” can be. What input do longtime residents truly have when private corporations and developers are pushing a pro-growth agenda to turn a suburb into a city?

Markham’s growth could also result in an increase in cost-of-living similar to Toronto’s over the last few decades. In the light of the aforementioned growth-machine theory, are suburbs being transformed into new places of potential wealth despite their historically middle-class population? If so, what does community-building really have to do with anything?

As aruged by Jamie Peck, professor from University of British Columbia, typical city politics, along with the push for economic competitiveness, have also now arrived in the suburbs, as Vaughan and Markham become in-between cities where the demarcation between rural and urban, or rather between centre and periphery, looks thinner. The expansion of Toronto’s urban territories has arrived.

Nevertheless, the consequences for everyday living spaces — and the people who have long called these suburbs home — remain unknown. And they’re seemingly not on anyone’s priority list.

This article is from the CityMetric archive: some formatting and images may not be present.
Topics in this article : Suburbs
Websites in our network