Four years ago last April, vast swaths of Nepal’s capital, Kathmandu, turned to rubble in a matter of minutes. The magnitude 7.8 earthquake, which wrought destruction on the city, was followed by hundreds of aftershocks. Just 17 days later, another magnitude 7.3 temblor felled more buildings and structures, which had stood through the first quake.

The human toll was catastrophic: across Nepal, 9,000 people died and hundreds of thousands more were left destitute, facing extreme poverty. The damage to Nepalese culture was also significant: hundreds of historic buildings, shrines and statues across the capital were reduced to dust.

Four years and hundreds of millions of dollars in donations later, Nepal is slowly recovering. Inevitably, though, a catastrophe of this scale has caused issues for the nation’s resource-starved government. Researchers have highlighted that political squabbling and a lack of local or regional governance have slowed reconstruction.

Rising from the rubble

When a city is damaged beyond recognition, the need to rebuild presents an opportunity to reshape and redraw the physical landscape – to make it stronger and grander than it was before. Catastrophic situations can bring about unexpected transformations, not just in a city’s design and architecture, but also in society – creating new identities and opportunities. 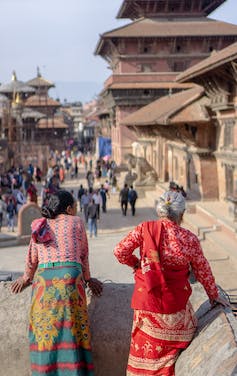 Kathmandu has long grappled with the conflict between tradition and modernisation. For most of its history, it has retained its medieval urban culture: Hindu and Buddhist religious practices have long influenced the city’s layout and design. But there have always been parallel concerns that the city could be on the cusp of losing its historic character.

Even before the earthquake struck, unbridled and unregulated growth had been undermining the city’s historic buildings, draining its natural resources and disrupting the skyline, with tall buildings blocking views.

The city’s five major rivers have been reduced to drainage canals due to development pressure and inconsiderate sewage discharge, while hinterland on the outskirts was rapidly cleared to build houses for those displaced by political conflict over the last two decades.

A city on the loose

As far back as 1934, much of the historic city was flattened by another strong earthquake. That moment is now regarded as the advent of modernisation, which introduced new buildings, roads and technology to the city. The 2015 earthquake brought many urban issues back into focus, and for a moment, it seemed the city could have been a giant workshop to test solutions to problems, in housing, culture, transport and heritage.

But as before, Kathmandu continues to operate as a city on the loose. From my own observation of the city, it seems that new development continues at almost the same rate as the decade before the earthquake struck. The transport network remains asphyxiated by too many vehicles. And both local and federal efforts to fix the city’s urban planning problems and accommodate its growing population remain fixated on creating satellite towns, ignoring the potential of retrofitting historic neighbourhoods.

After they were damaged in the 2015 earthquake, city authorities wanted to demolish and redevelop historic buildings such as Singha Durbar and Bagh Durbar (which date back to 1908 and 1805 respectively) – though they were finally prevented by a supreme court mandate. Ranipokhari (Queen’s Pond) at the centre of the city – a crucial cog of the old city’s innovative drainage system – has been drained and paved over to make space for shops and cafes. And a central open space called Khula Manch has been turned into a parking lot resembling a dystopian scrap yard.

Political conflict is rife and agreements hard to come by. For example, in the absence of any agreement between different public sector agencies (including the municipal government, the National Reconstruction Authority and the Department of Archaelogy) about how the city’s famous Dharahara Tower should be rebuilt, there are plans to build two towers and share the profits generated from construction contracts, to appease any dissent.

The reconstruction continues with little input from local communities, while international powers make their presence felt. Kathmandu’s Durbar Square has become a geopolitical playground, with an influx of donor agencies and countries rushing to prove their solidarity. 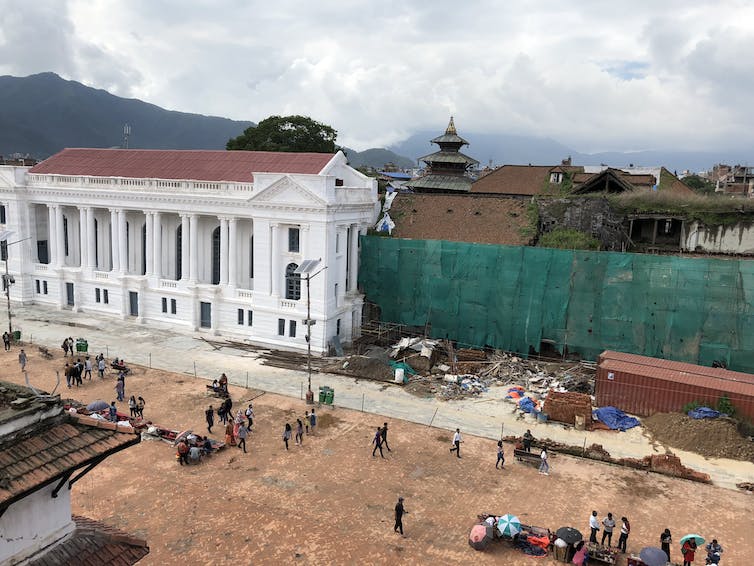 The renovation of Gaddi Baithak (or “royal seat”) has been completed with US support, despite controversy over its slightly altered facade. Likewise, Nau Tale Durbar (“nine-storey palace”), is currently being rebuilt with the help of Chinese investment, and has attracted local ire for lack of transparency.

Many citizens in Kathmandu are more impatient than ever to fix these problems. Yet the reconstruction is often an assault on their personal and collective identities, given that these sites carry significant religious, emotional and cultural value. A great sense of injustice has arisen over the way building contractors have ignored local techniques and values.

For example, the redevelopment of Kasthamandapa – the temple from which the city takes its name – has stalled due to disagreement over construction materials and methods. Kasthamandapa was built with wood from a single tree some 1,000 years ago. A new tree needs to be found and there needs to be a whole new system of extracting timber. It requires the best craftsmen in the country and significant skilled labour. 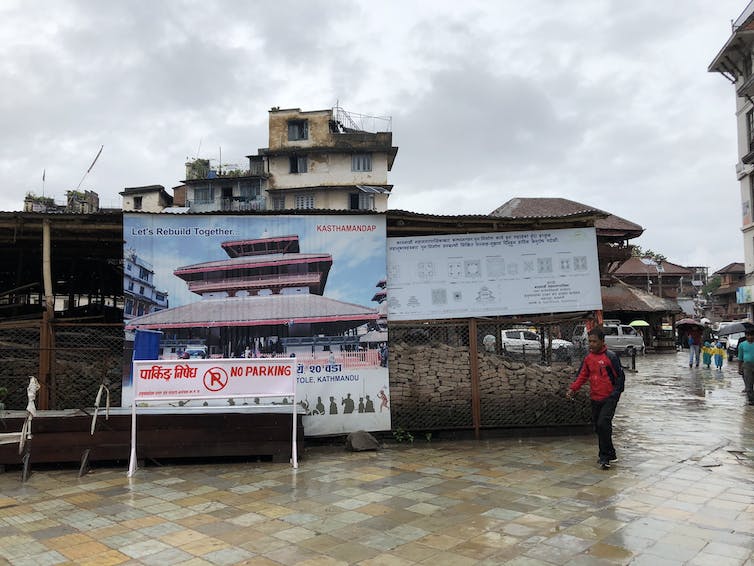 The lack of assessment of what has been lost has also been a sore point for heritage campaigners. The absence of detailed historical plans for many important structures means reconstruction efforts are based on limited photographic evidence. Campaigners claim that, without local input into the rebuilding, the authenticity of the new structures will be undermined.

The government’s reconstruction plans are now being challenged by numerous grassroots organisations fighting to save the city’s heritage. Post-disaster reconstruction will continue in Kathmandu, even amid social and political upheaval. But while authorities appear insensitive to citizens’ concerns, a greater grassroots awareness of local heritage has clearly emerged – and that, at least, should be welcomed.