On 10 October 1928, tens of thousands of citizens of Newcastle and Gateshead lined the streets as King George V officially opened the Tyne Bridge. In the 90 years since the royals first crossed it in their horse-drawn carriage, the Tyne Bridge has become an internationally recognised symbol of Newcastle, and the north-east of England. But more than that, the bridge shows how a practical piece of infrastructure can become an integral part of a city’s culture and identity.

Bridges have been central to life on Tyneside since the second century AD, when the Roman settlement of Pons Aelius – literally Aelian Bridge, named after the family of the emperor Hadrian – was established near the current site of Newcastle’s medieval Castle Keep.

The original Tyne Bridge was built by the Romans on the site of the present-day Swing Bridge. Not just a crucial part of the Roman infrastructure, the bridge at Pons Aelius was also a site of religious worship. Two altars, dedicated to the water gods Neptune and Oceanus, were found on the site of the bridge in the late 19th century. Since the beginning, the bridge was entwined with the identity and culture of locals.

Over the centuries, more bridges – including the dramatic High Level rail and road bridge, opened 1849 – were built across the Tyne. By the 1920s, the enormous expansion in road traffic meant that a new crossing was vital. Work began in August 1925, to a design by the engineering firm of Mott, Hay and Anderson – designers of the strikingly similar Sydney Harbour Bridge.

From prime to decline

The new Tyne Bridge was immediately celebrated as a symbol of Tyneside’s international reputation for industrial excellence – and a source of considerable local pride. The Times reported on January 31, 1928 that “Tynesiders as a whole are proud of this scheme… because of the ingenuity of the idea and of its successful execution”.

For the people of Gateshead, though, the bridge had resulted in the loss of their commercial and industrial centre. Bottle Bank, a steep, busy street that swept down to the Tyne, was largely destroyed to clear the way for construction.

Although the bridge came at a cost to the local community, its was also a beacon of hope during troubled economic times.

The Tyne Bridge project had been proposed in 1924 as a form of unemployment relief for skilled Tyneside workers. Constructing the bridge provided livelihoods for those facing dire employment prospects and an uncertain future. As he opened it, George V expressed his hope that the bridge would “help to bring back to your city the full tide of prosperity”.

In the late 20th century, the landscape of the north-east became closely associated with post industrial decline, as shipyards, engineering firms and coal mines closed. Throughout this period, the Tyne Bridge has stood firm as a symbol of Tyneside resilience and, more recently, of cultural regeneration.

Since the turn of the 21st century, the mills, shipyards and markets that once lined the river banks have been replaced with restaurants, bars and world-renowned cultural centres including the BALTIC Centre for Contemporary Art and the Sage Gateshead.

It is fitting that the cultural rebirth of Tyneside should have taken place against the backdrop of the Tyne Bridge. Regeneration was intended to embody both a physical and symbolic bridging of the gap between Newcastle and Gateshead, encapsulated in the creation of the NewcastleGateshead brand to promote tourism, culture, and business in the region. NewcastleGateshead Quayside is a space that celebrates the industrial past, while creating a place for locals to reimagine collective identities.

In October 2017, the bridge was the setting for Freedom on the Tyne, marking the 50th anniversary of Martin Luther King Jr’s visit to Newcastle in 1967. This huge performance used the bridge to evoke the Edmund Pettus Bridge in Selma, Alabama, but also reinforced its connection to cultural identity on Tyneside. For the people of Newcastle and Gateshead, this commemoration of civil rights activism served as a reminder of the region’s long history as a centre of radical politics, and of the global nature of industry and culture on Tyneside, shaped by people from around the world.

To pay tribute to the iconic structure, and capture its place in Geordie hearts and minds, we are leading a project called Bridging the Tyne. With #WeAreTheTyne, we are in the process of creating an online archive where members of the public can share stories and images of Newcastle’s bridges. 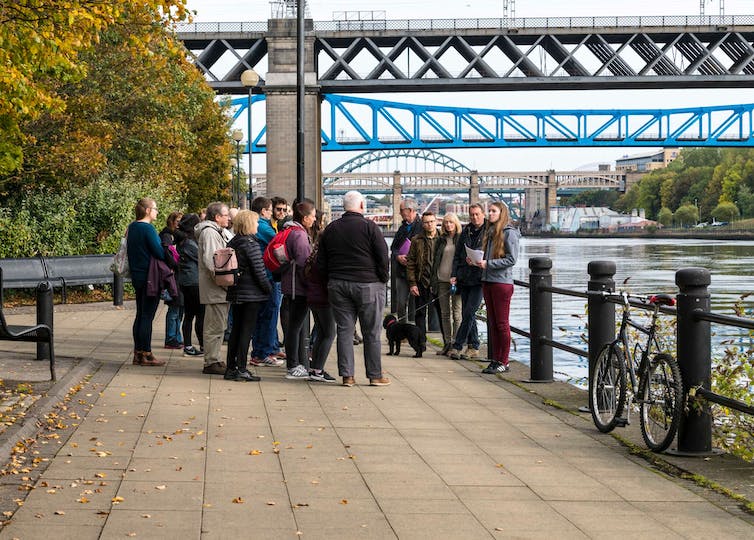 And academics from Northumbria University have led members of the public on a guided walk passing under all seven bridges of central Newcastle, giving talks on topics from the geological history of the Tyne Valley, to the experience of Russian revolutionaries in 19th-century Newcastle.

The Tyne Bridge is a beautiful landmark and a practical aid to transport. But more than that, it’s a central part of Newcastle’s cultural landscape and identity, steeped in history, but very much a part of its present and future.

This article is from the CityMetric archive: some formatting and images may not be present.
Topics in this article : Bridges , History