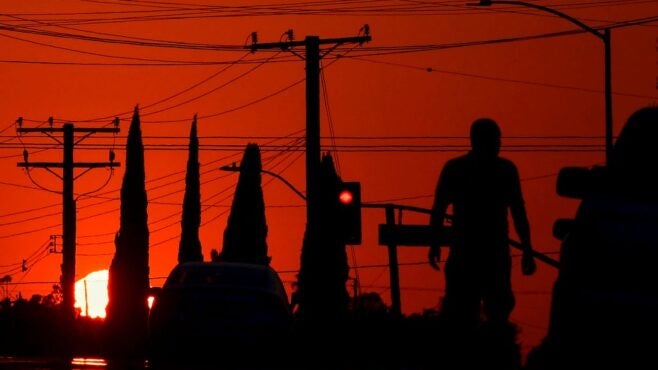 The sun sets behind power lines in Los Angeles on 3 September, 2020, ahead of a heatwave that arrived Labour Day weekend. (Photo by Frederic J. Brown/AFP via Getty Images)

They died out of sight, underneath a scorching late-summer sun.

In Los Angeles, when midday temperatures reach 38°C (100°F), the asphalt cooks at a blistering 66°C (150°F). Over the Labour Day holiday weekend of 6 September, when temperatures in the city’s Woodland Hills neighbourhood hit a record 49°C (121°F), at least three homeless Angelenos perished due to heat-related causes (autopsies may reveal up to a dozen more cases in coming months). Holland Harmon, 60, was found dead on the sidewalk in the middle of the afternoon.

It’s not uncommon to see low-income Californians, housed or unhoused, die of heat stress, even when solutions such as shade, shelter and air conditioning can literally be within arm’s reach. “Living on the margins and knowing how expensive it is to run that A/C, they try to push through,” says UC Berkeley professor Rachel Morello-Frosch, who studies climate change and inequality. “It could have detrimental consequences for pre-existing health conditions that make them vulnerable to these heatwaves.”

LA, already accustomed to droughts, heatwaves and wildfires, serves as a cautionary tale concerning the dire threat to human life posed by climate change. The city also holds up an equally unflattering mirror to another very US policy failure: rampant geographic inequality. A study of Los Angeles neighbourhoods found that those that were “redlined” – the term that describes how mortgages and financial services in the early 20th century were systematically denied to people of colour due to racial discrimination – are today, on average, 7.6 degrees hotter than non-redlined areas and still predominantly Black and brown.

Kate Gordon, senior climate change adviser to California Governor Gavin Newsom, acknowledges that extreme temperatures are an immediate, urgent equity and economic issue in her state. And LA’s technocratic Mayor, Eric Garcetti, has outlined an extensive Green New Deal touted as one of the US’s best examples of local climate leadership. Yet extreme gaps in heat readiness and resilience across a sprawling metropolis, one that is geographically defined by class and racial divides, make notions of climate equity in LA a far-off goal. During the deadly Labour Day heatwave, just six modest cooling centres were opened for the entire city; the fact that fewer than 300 Angelenos used them that weekend suggests a programme in need of significant expansion and improvement.

The circumstances of Los Angeles, much like dry brush on a hillside, make the issue of rising temperatures even more primed for deadly outcomes: a varied topography of coasts, mountains and valleys that has allowed the wealthy to settle in cooler areas; an economy weighted towards heat-exposed occupations such as construction, landscaping and manufacturing; a car-centric transportation system that produces heat-trapping exhaust; and a metastasising homelessness crisis.

“Due to the social factors like less access to healthcare, suboptimal work access, less optimal nutrition, indigenous, Latino and Black communities have higher rates of conditions such as hypertension and cardiovascular disease, which make them much more vulnerable to the adverse health effects of heat,” says Morello-Frosch.

Heatwaves, like other natural disasters, get the media attention. The 2006 heatwave in the state of California resulted in $5.3bn in healthcare costs, 16,000 emergency-room visits and 650 deaths. But it’s the slow, persistent rise in average temperatures, coupled with pollution and wildfires, that will push the limits of adaptability and add pressure to low-wage workers, says Juanita Constible, a senior advocate with the Natural Resources Defense Council.

“Having people taking care of themselves isn’t the morally appropriate response to this moment,” says Constible.

The working poor in Los Angeles will feel the inexorable rise in heat in ways that many of their neighbours won’t. Rising temperatures lower labour productivity, a huge hit to the overall economy and the incomes that keep poor families clothed and fed. During wildfire season, when particulate-matter pollution spikes, lower-income workers will still have to work even as the air quality decreases; if they’re mandated to put on respirators for protection, the added effort required to breathe through protective equipment only increases the stress and strain of toiling in the heat.

Numerous studies show the dire impact warmer weather has on the livelihood and well-being of the US’s workers: higher rates of heat-related occupational deaths occur among Hispanic men working in construction and agriculture; construction workers make up 6% of the US workforce and 36% of heat-related deaths; nationally between 2000 and 2018, extreme temperatures led to a cumulative loss of nearly 1.1 billion work hours in the agricultural, manufacturing and service sectors; and in 2018, fewer than half of construction workers had paid sick leave.

“We have a system of labour laws that aren’t ready for climate change,” adds Constible. “In the United States, the strong immigrant workforce, especially in construction, landscaping and farmwork, isn’t likely to be covered by existing labour laws.” Morello-Frosch says this “racialised division of labour” and its often piecemeal or pickup system of pay means workers are reluctant to take the breaks or protections afforded them due to the structural nature of how they’re paid. Immigrants, especially those without legal status, often have the least protections; fully 96% of heat-related deaths in the US between 2004 and 2015 happened to non-citizens.

The city’s efforts to reduce temperatures have been explicit about making equity a key requirement. First adopted in 2014, a successful Cool Roofs ordinance that requires reflective surfaces and provides rebates for lower-income neighbourhoods has, like many weatherisation programmes, been a wonky success story: reflective surfaces and lighter-colour paint on a rooftop can reduce the surface temperature of shingles by an incredible 50°F on a hot day. “It constantly delivers 20% energy savings without having to pay a monthly bill,” says Kurt Shickman, executive director of the Global Cool Cities Alliance. Collaborative projects in neighbourhoods such as Watts and Compton will invest millions in urban design initiatives focused on equity and heat resilience, and Garcetti’s Green New Deal promotes expanded park access. Los Angeles has also promised to invest in tree plantings and rectify the imbalance across neighbourhoods: the wealthier West Los Angeles and Los Feliz areas have 35% more tree canopy than South LA. The city recently hired an urban forestry manager and, according to chief sustainability officer Lauren Faber O’Connor, is on track to plant 90,000 trees between 2019 and 2021. LA aims to grow its tree canopy by 50% in the areas of greatest need by 2028.

Trees have been heralded as a solution to cooling and shade, but it’s not as simple as planting saplings, says Edith de Guzman, director of research for TreePeople* and a member of the LA Urban Cooling Collaborative. New trees take years to provide shade, and there are tangible barriers to city planting efforts, including maintenance and engaging residents in care. Many areas, especially those with little tree canopy, have minuscule parkways between streets and sidewalks, complicating the planting process. Studies have shown that much of the available land for planting trees is privately owned. The long-term nature of these efforts also raises a question: what species will survive and prosper in the new climate a decade or two in the future?

“How do you cool an entire neighbourhood?” says Guzman. “If we don’t engage private land to plant trees, we’ll fail.”

Is any of this enough? LA’s Green New Deal road map offers numerous plans and initiatives to cool the city by 2028, including creating 250 miles of cool pavement, piloting “cool neighbourhood” programmes with added shading and water features such as splash pads, as well as shading at every transit stop. A trip during rush hour, where it’s easy to spot workers baking under the sun at unshaded bus stops, shows how far the city needs to go. The program director of climate change and sustainability at the Los Angeles County public health department*, Elizabeth Rhoades, says LA has worked to establish a network of cooling centres, with particular focus on areas with the most need. But during the record-breaking heatwave that hit the city in early September, access was found lacking in many neighbourhoods. (Rhoades declined to comment about the performance of cooling centres during this year’s heatwave.)

“I would agree the city is addressing the heat inequality issue with the resources they have,” says Shickman. “It’s analytic, it’s research-oriented. They just need to find a way to scale it up five- or tenfold. They need to get the financial community to value the cost of rising heat.”

“People in the past have thought of extreme heat as an inconvenience,” says Rhoades. “But what people need to realise is that as extreme weather events become more frequent and severe, they’re going to affect the entire county, with power shutoffs, increased droughts and worse air quality. Privileged people who felt impervious will feel the impacts, and the cascading effects, in their daily lives.”

*Correction: An earlier version this article misstated the job titles of Elizabeth Rhoades and Edith de Guzman. Rhoades is the program director of climate change and sustainability at the LA County public health department, not the head of the department. Guzman is director of research for TreePeople, not the director.

This article is part of a reported series focused on how increasing numbers of high-heat days are affecting cities around the globe. Read about the situation in Mumbai and come back to City Monitor in the coming weeks for additional reports.