There is something special and awe-inspiring about watching new land form. This is what happened recently in Hawai’i as its Kīlauea volcano erupted. Lava is reaching the ocean and building land while producing spectacular plumes of steam. These eruptions are hugely important for the creation of new land. But they are also dangerous. Where the lava meets the ocean, corrosive acid mist is produced and glass particles are shattered and flung into the air. Volcanic explosions can also hurl lava blocks hundreds of metres and produce waves of scalding hot water.

At Kīlauea, lava is erupting from a line of vents on the volcano’s flanks, and is moving downslope to the edge of the island, where it enters the ocean. This is a process that has been witnessed many times at Hawai’i and other volcanic islands. And it is through many thousands of such eruptions that volcanic islands like Hawai’i form.

The new lava being added to Hawai’i by this latest Kīlauea eruption replaces older land that is being lost by erosion, and so prolongs the island’s lifespan. In contrast, older islands to the north-west have no active volcanoes, so they are being eroded by the ocean and will eventually disappear beneath the waves. The opposite is happening to the south-east of Hawai’i, where an underwater volcano (Lōʻihi Seamount) is building the foundations of what will eventually become the next volcanic island in this area.

How lava gets to the ocean at Hawai’i

The lava erupting from the current Kīlauea vents has a temperature of roughly 1150 degrees °C, and has a journey of between 4.5km and 5.5km to reach the ocean. As this lava moves swiftly in channels, it loses little heat and so it can enter the ocean at a temperature of over 1000 degrees°C. 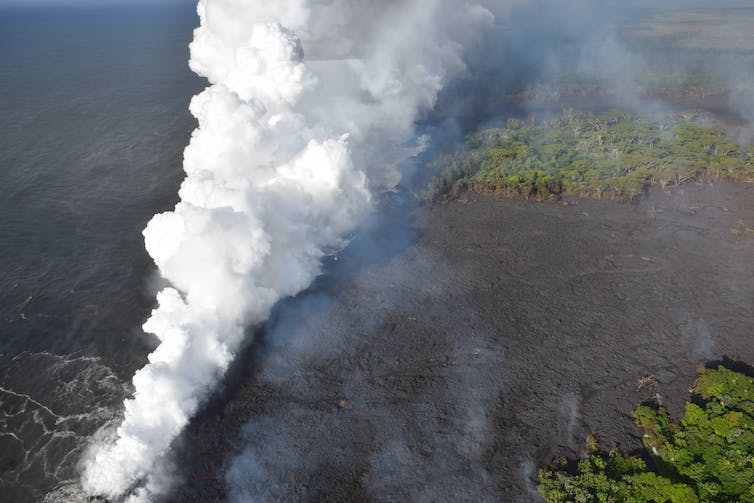 What happens when lava meets the ocean?

We are witnessing one of the most spectacular sights in nature – billowing white plumes of steam (technically water vapour) as hot lava boils seawater. Although these billowing steam clouds appear harmless, they are dangerous because they contain the small glass shards (fragmented lava) and acid mist (from seawater). This acid mist known as “laze” (lava haze) can be hot and corrosive. If anyone goes to near it, they can experience breathing difficulties and irritation of their eyes and skin.

Apart from the laze, the entry of lava into the ocean is usually a gentle process, and when steam is free to expand and move away, there are no violent steam-driven explosions.

But a hidden danger lurks beneath the ocean. The lava entering the sea breaks up into blobs (known as pillows), angular blocks, and smaller fragments of glass that form a steep slope beneath the water. This is called a lava delta.

A newly formed lava delta is an unstable beast, and it can collapse without warning. This can trap water within the hot rock, leading to violent steam-driven explosions that can hurl metre-sized blocks up to 250 metres. Explosions occur because when the water turns to steam it suddenly expands to around 1,700 times its original volume. Waves of scalding water can also injure people who are too close. People have died and been seriously injured during lava delta collapses

So, the ocean entry points where lava and seawater meet are doubly dangerous, and anyone in the area should pay careful attention to official advice on staying away from them. 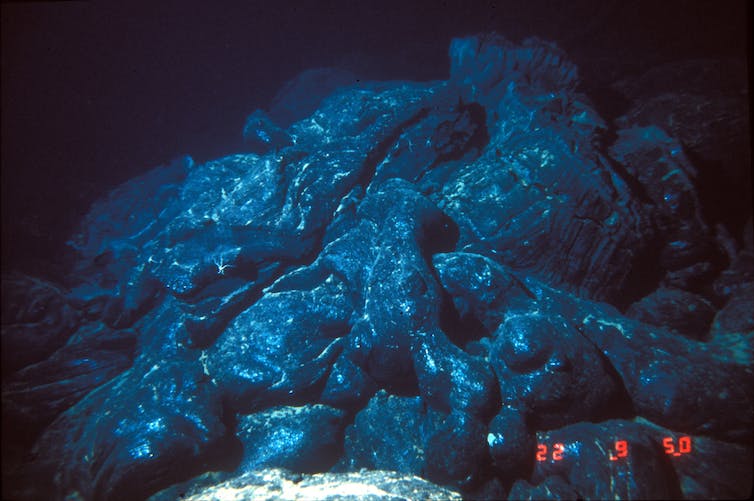 What more can we learn from these eruptions?

Remarkable examples of lava deltas have been discovered near the top of extinct volcanoes (called tuyas) in Iceland and Antarctica. These deltas can only form in water and the only plausible source of this water in this case is melted ice. This means that these volcanoes had melted water-filled holes up to 1.5km deep in ice sheets, which is an astonishing feat. In fact, these lava deltas are the only remaining evidence of long-vanished ice sheets.

It is a privilege to see these incredible scenes of lava meeting the ocean. The ongoing eruptions form part of the natural process that enables beautiful volcano islands like Hawai’i to exist. But the creation of new land here can also bring danger to those who get too close, whether it be collapsing lava deltas or acid mist.