The fire at Grenfell Tower has catapulted high-rise social housing into the public consciousness, in a way not seen since the 1960s. Back then, high-rise tower blocks represented a new vision of social progress. They were greeted with hope and optimism by housing officials, architects and town planners across the UK.

But now, the mood has turned to one of bitterness, anger and fear. Over the years, most of these so-called “villages in the sky” have become concrete containers for society’s poorest and neediest people.

This is not just an issue in the UK. Today, millions of people live in high-rise apartment blocks around the world. In Moscow alone, there are 11,783 high-rise towers, in Hong Kong there are 7,833, and in Seoul there are over 7,000, many of which are residential. Understanding the link between high-rise living and mental health is crucial to protect the well-being of tower block residents across the globe.

High-rise living evokes unsettling fears – residents could be trapped in a fire, or fall or jump from the tower. The sheer number of people sharing a single building can also increase the threat from communicable diseases such as influenza, which spread easily when hundreds of people share a building’s hallways, door handles and lift buttons.

Sharing semi-public spaces with strangers can make residents more suspicious and fearful of crime. Many feel an absence of community, despite living alongside tens or hundreds of other people. And in earthquake-prone countries, residents of high-rise towers face the possibility that their entire building could collapse.

Perhaps most poignant of all is the fear of isolation. During ongoing research into social isolation among older people in the English city of Leeds, residents of high-rise buildings reported feeling lonely and isolated – some were afraid to even open their front doors.

Many of these older residents rely on networks of neighbours, friends and family to help them get around and perform basic chores. One wheelchair user explained how she relied on her neighbour to help her get to the lift and out of the block. If her neighbour is not there, she is stuck.

Living with fear every day means that residents of high-rise housing – and especially social housing – are vulnerable to mental health issues. Psychologists have been investigating this link since the 1970s – a 1979 study based in Glasgow found evidence that high-rise residents were presenting psychological symptoms more often than other housing residents.

Another paper from 1991 compared elderly African-Americans living in high-rise and low-rise buildings in Nashville. The high risers had a higher incidence of depression, phobias, schizophrenia.

But researchers aren’t always comparing like with like. In Nashville, although the residents shared the same ethnic background, high risers were poorer, less educated and had fewer social contacts: all factors which may contribute towards mental ill health.

So it’s difficult to say whether it’s the building itself, or other hardships such as poverty, which cause high-rise residents such difficulties. Yet there is some evidence to suggest that high-rise buildings themselves are actually responsible for some of the harms done to residents.

For example, in Singapore, between 1960 and 1976, the percentage of people living in high-rise buildings climbed from 9 per cent to 51 per cent. During the same period, the per capita rate of suicides by leaping from tall buildings increased fourfold, while suicide by other means declined.

This could be for one of two reasons. Either more people became suicidal and would have found a way to commit suicide by any means – or greater access to tall buildings gave more people a means of killing themselves, which they wouldn’t otherwise have done. 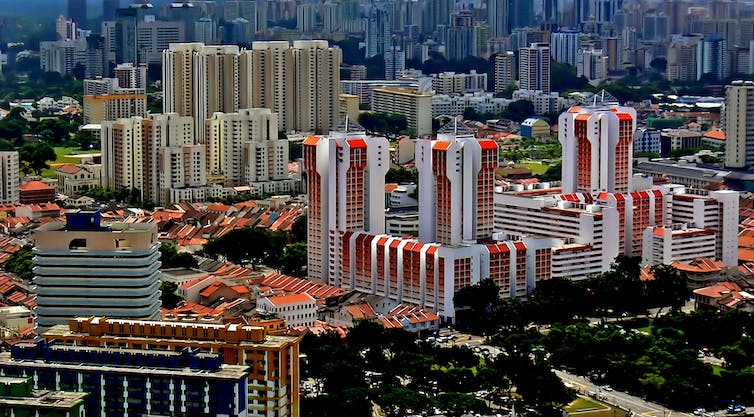 The overall suicide rate in Singapore increased by 30 per cent over the aforementioned period but the rate by leaping increased many times faster, which suggests that having more tall buildings leads to more suicides. While suicide rates have been stable for five decades now, jumping from buildings remains a common method for suicide there, as well as in other cities where high rise buildings are ubiquitous – such as Hong Kong, New York City, Taipei City.

Yet high-rise living can have its positives. Roughly four in five Singaporeans live in public housing – almost all of it high-rise. Older buildings are regularly refurbished and most are near to local food markets, parks and sports halls. Some even have sky gardens and rooftop running tracks.

All of these factors can help to create a less stressful environment. What’s more, in Singapore, the residents of public housing are deliberately mixed by income and ethnicity, so that each neighbourhood is reflective of the population as a whole.

This helps to avoid the kind of social segregation that tends to occur in the UK. If this example is followed in other cities across the globe, then living in high-rise towers might not be quite so damaging after all.