The word “genius” is universally associated with the name of Leonardo da Vinci – a true Renaissance man, he embodied scientific spirit, artistic talent and humanist sensibilities. Exactly 500 years have passed since Leonardo died in his home at Château du Clos Lucé, outside Tours, France. Yet far from fading to insignificance, his thinking has carried down the centuries – and still surprises today.

The Renaissance marked the transition from the Middle Ages to modernity, after the spread of the plague caused a global crisis resulting in some 200m deaths across Europe and Asia. Today, the world is on the cusp of a climate crisis, which is predicted to cause widespread displacement, extinctions and death, if left unaddressed. Then, as now, radical solutions were called for to revolutionise the way people live and safeguard humanity against catastrophe.

Around 1486 – after a pestilence that killed half the population in Milan – Leonardo turned his thoughts to urban planning problems. Following a typical Renaissance trend, he began to work out an “ideal city” project, which – due to its excessive costs – would remain unfulfilled. Yet given that unsustainable urban models are a key cause of global climate change today, it’s only natural to wonder how Leonardo might have changed the shape of modern cities.

The birth of urbanism

Although the Renaissance is renown as an era of incredible progress in art and architecture, it’s rarely noted that the 15th century also marked the birth of urbanism as true discipline. 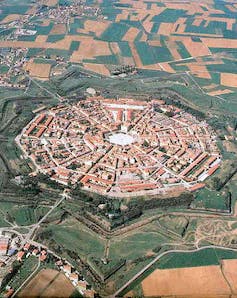 The rigour and method behind the conscious conception of a city had been largely missing in Western thought until the moment when prominent Renaissance men pushed forward large-scale urban projects, such as the reconfiguration of Pienza, the expansion of Ferrara and the construction of the fort town Palmanova.

These works surely inspired Leonardo’s decision to rethink the design of medieval cities, with their winding and overcrowded streets and with houses piled against one another.

It is not easy to identify a coordinated vision of Leonardo’s ideal city because of his disordered way of working with notes and sketches. But from sources including the Paris manuscript B and the Codex Atlanticus – the largest collection of Leonardo’s papers ever assembled – a series of innovative thoughts can be reconstructed, regarding the foundation of a new city along the Ticino River, designed for the easy transport of goods and clean urban spaces. 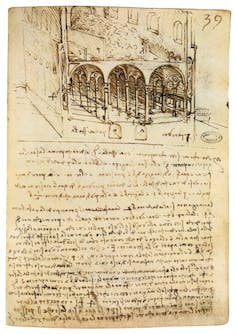 Leonardo wanted a comfortable and spacious city, with well-ordered streets and architecture. He recommended “high, strong walls”, with “towers and battlements of all necessary and pleasant beauty”, and felt the place needed “the sublimity and magnificence of a holy temple” and “the convenient composition of private homes”.

His plans for a “modern” and “rational” city were consistent with Renaissance ideals. But, in keeping with his unconventional personality, Leonardo included several innovations in his urban design. Leonardo wanted the city to be built on several levels, linked with vertical staircases. This design can be seen in today’s high-rise buildings, but was absolutely unconventional at the time.

Indeed, his idea of taking full advantage of the interior spaces by positioning flights of stairs on the outside of the buildings wasn’t implemented until the 1920s and 1830s, with the birth of the Modernist movement. While in the upper layers of the city, people could walk undisturbed between elegant palaces and streets, the lower layer was the place for services, trade, transport and industry.

But the true originality of Leonardo’s vision was its fusion of architecture and engineering. Leonardo made designs for extensive hydraulic plants to create artificial canals throughout the city. The canals, regulated by locks and basins, were supposed to make it easier for boats to navigate inland and transport goods.

Leonardo also thought that the width of the streets ought to match the average height of the adjacent houses: a rule still followed in many contemporary cities across Italy, to allow access to sun and reduce the risk of damage from earthquakes.

Fiction and the future

Although some of these features existed in Roman cities, before Leonardo’s drawings there had never been a multi-level, compact modern city which was thoroughly technically conceived. Indeed, it wasn’t until the 19th century that some of his ideas were applied. For example, the subdivision of the city by function – with services and infrastructures located in the lower levels and wide and well-ventilated boulevards and walkways above for residents – is an idea that can be found in Haussmann’s renovation of Paris under Emperor Napoleon III.

It is necessary to wait even until the 20th century to see the same ideas represented in the vertical city of Futurist architects, or in the modern city of Hilbeseimer or Le Corbusier – as well as in dystopian tales such as Fritz Lang’s Metropolis and Philip Dick’s Blade Runner. Certainly, creating a city with different levels opens up the possibility of greater inequality between city-dwellers.

Today, Leonardo’s ideas are not simply valid – they actually suggest a way forward for urban planning. Many scholars think that the compact city – built upwards instead of outwards, integrated with nature (especially water systems) with efficient transport infrastructure – could help modern cities become more efficient and sustainable. This is yet another reason why Leonardo was aligned so closely with modern urban planning – centuries ahead of his time.