Australia’s Gold Coast has long been derided as an “overgrown resort town” and a “cultural desert”. But the 2018 Commonwealth Games allowed the host region to develop and communicate its big city credentials. Mega-events have been heavily criticised in recent years, but if planned properly they can bring many benefits for host cities, including social and economic regeneration. Gold Coast authorities were also interested in urban development: they wanted to show the world their coastline has matured from tourist resort to fully fledged city.

This part of southeast Queensland has been known as the Gold Coast since 1958, when the local council adopted the name to boost the area’s growing reputation as a seaside resort. In 1959, Gold Coast Town Council was renamed the City of Gold Coast – underlining its ambitious expansion plans.

In the 1970s and 1980s, the Gold Coast became Australia’s most renowned holiday spot, and a popular destination for both interstate and international tourists. It was during this period that the coastline became highly urbanised – earning Gold Coast its reputation as a commercialised, hedonistic place dominated by nightlife, hotels and holiday apartments.

Today, the City of Gold Coast is home to more than 500,000 residents, making it Australia’s sixth largest city and second biggest local government administration. Coastal settlements such as Southport, Surfers Paradise, Burleigh Heads and Coolangatta integrate with inland suburbs such as Nerang and Mudgeeraba to form a long, narrow urban conurbation. 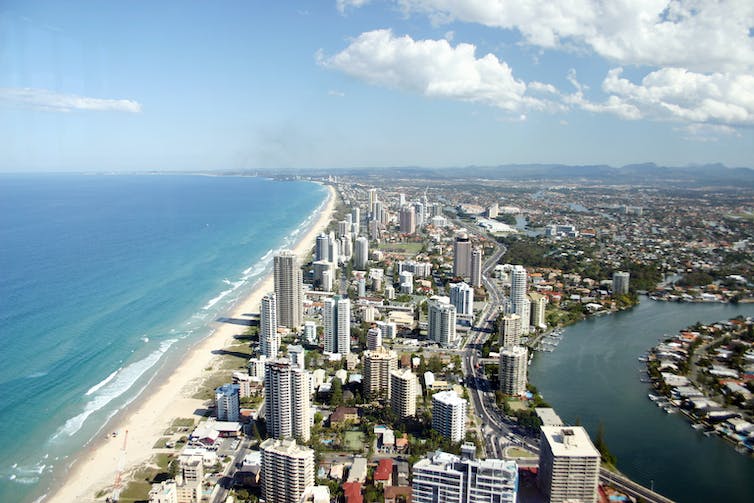 Often described as Australia’s most “American” city, Gold Coast features clusters of high rise buildings in Surfers Paradise and Broadbeach. But these are not clusters of office blocks – they are vertical tourist resorts. Because of Gold Coast’s unusual development history – described by academic Patrick Mullins as “tourism urbanisation” – there is no obvious centre.

Determined to shake off Gold Coast’s reputation as a cultural void, organisers of the games staged an extensive cultural programme called Festival 2018 alongside the games. A series of 160 free events staged in parks, streets and squares created a festive atmosphere and engaged audiences less interested in sport. The City of Gold Coast sees arts and culture as “a key economic driver”, and the AUS$30m Festival 2018 is part of a wider strategy to develop local creative industries in the area.

But at times, this strategy has been inconsistent. While the aim was to present Gold Coast as a city that is cultural and cosmopolitan, rather than crass and commercialised, much of the promotional material and media coverage has actually reinforced its image as a beach resort.

The opening ceremony was full of references to beach culture: teams entered the stadium led by their nation’s name displayed on a kid’s surfboard and dancers with beach towels performed on sand. Television coverage of the games has emphasised the Gold Coast’s reputation as a pleasure periphery, rather than a bona fide city. This shows how important – and how difficult – it is to deliver consistent messages about a city during a global media event.

Despite these difficulties, Gold Coast has cleared hurdles which have sent other host cities tumbling in the past. Organisations such as the International Olympic Committee, FIFA, UEFA and the Commonwealth Games Federation are all attempting to spread their events out over a wider area – even allowing events to be staged across continents. Gold Coast 2018 has provided a textbook example of how mega-events can work well in regions with many centres.

The 17 Gold Coast 2018 sports venues were spread across a large geographical area – from Coomera in the north to Coolangatta in the South. There were even sports events in Townsville and Cairns – over a thousand miles from the Gold Coast in northern Queensland. Combined with the extensive use of existing venues and temporary seating, this approach minimises the chances of white elephants later on.

A city in the making

While dispersing events helps to avoid “investment overdose” in one particular part of the city, Gold Coast authorities are also trying to use the Commonwealth Games to develop a more conventional urban form, by reinforcing Southport as the central business district while diversifying the local economy away from tourism and construction, and towards knowledge industries.

There’s no doubt the Commonwealth Games have assisted this ambition. The AU$520m Commonwealth Games Village has been located near the region’s main university (Griffith) and hospital (Gold Coast University Hospital), and the plan is to develop a precinct here dedicated to health and education.

Over the past 50 years, various municipal authorities have tried to use mega-events to revive their fortunes and reinvent themselves as post-industrial cities. The Gold Coast marks a departure from this model. In this rapidly growing region, we are now witnessing the ways that mega-events can be used to help turn a series of coastal settlements into a coherent city.

One of the most significant legacies of the Commonwealth Games might be to further the idea among citizens and visitors that Gold Coast is actually a city, rather than a tourism brand. It is too early to judge the outcomes of this event, but coastal resorts, city regions and event organisers across the world will be watching to see whether the 21st Commonwealth Games will be the making of the Gold Coast.

Andrew Smith, Reader in Tourism and Events, University of Westminster.

This article is from the CityMetric archive: some formatting and images may not be present.
Topics in this article : Sport , Tourism