Worldwide population growth and mass migrations are putting the infrastructure of many cities under strain. With city governments under pressure to provide more housing and work spaces, people can end up living and working in poorly designed or low quality buildings.

Since the beginning of human civilisation, people have been striving to create a beneficial built environment. Take Neolithic buildings, for instance: they were purposefully orientated to catch the sun and allow for ventilation. Later, over 3,000 years ago in Crete, the Minoans built underground sewage systems to avoid plagues. So too did the Romans, who also used underfloor heating systems and aqueducts, and provided baths throughout the empire to keep the population in good health. 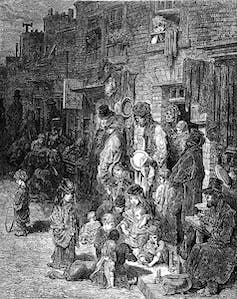 Despite these early successes, maintaining healthy conditions became much more difficult in times of rapid population growth. During the industrial revolution, for instance, many cities quickly became overpopulated. With growing industries, employers were under pressure to accommodate more workers, and decayed or unfit buildings were used to host increasing numbers of tenants.

In the UK, living conditions reached such poor standards that the government passed a number of laws to improve public health. A similar sanitation project took place in Germany, at around the same time. These strategies provided many cities with outstanding green infrastructure such as parks and boulevards, which still bring many health benefits to those who can access them today.

But in recent years, “sick building syndrome” has become a worry worldwide. Research has shown that headaches and respiratory problems among office workers were directly related to the use of air conditioning, poor ventilation and other widely-adopted technologies. Today, health professionals and designers have plenty of evidence to show that some buildings can harm people, both physically and psychologically. Yet ensuring buildings are “healthy” is a difficult task.

In the UK, some features such as ventilation and heating have to meet certain standards. But other design features, which are known to have a big impact on human welfare, are still not regulated. For example, there’s evidence that exposure to natural light and direct contact with nature have a positive effect on school exam results – yet there’s no legislation which says they must be a feature of learning environments.

And while scientists are constantly experimenting to grow our knowledge of the impacts that buildings have on human health, laws and regulations tend to develop more slowly. This means that even new buildings can be inadequately ventilated, or suffer from a lack of natural light – even though we now know that both cause symptoms of ill health.

A lack of natural ventilation means viruses are retained in the air, while a lack of natural light can affect brain functions. In Britain alone, these design pitfalls are adding to the stress on the NHS, and costing the economy an estimated £24.6m due to lost working days each year.

What’s more, as the Grenfell Tower disaster made awfully clear, technical difficulties and budget constraints can mean refurbishments are made using incompatible or inappropriate building materials, resulting in homes which simply aren’t safe to live in.

Architects aim to deliver sustainability by reducing energy consumption. There is a huge range of technologies which can help achieve this. But relying too heavily on such solutions can backfire: in 2016, researchers found that many homes had been built to be airtight, in a bid to meet energy efficiency targets. This can cause CO₂ and other pollutants to build up indoors, which in turn has adverse effects on residents’ health.

Human factors – including how we navigate and socialise within the built environment, and how our body responds to it – also have a big impact on the overall efficiency of buildings, and the sustainable technologies which go into them. Research has shown that people don’t always operate equipment as instructed – rather, they naturally look for comfort through more instinctive behaviours.

For example, when we feel a room is overheated, we tend to open windows to gain instant refreshment, rather than turning the thermostat down. This reduces the effectiveness of low-carbon technologies. So even buildings that have plenty of features to enhance energy efficiency can still be unsustainable, if people don’t use them properly.

The power of good design

Design is still the most powerful tool an architect can use: simple design measures, such as opening buildings towards sunnier aspects or adding ventilation in strategic locations to make the most of prevalent winds, are tried and tested techniques which can help to deliver healthier, more sustainable buildings.

Yet this approach comes with its own issues. Inner-city locations are often difficult to build in, because of their small size and crowded surroundings. Sometimes, architects will prioritise creating a “landmark” exterior, at the cost of a healthy interior. Other times, architects misinterpret planning guidance and recommendations, which can be vague and unspecific. Likewise, planning restrictions can actually be enforced to the detriment of the overall building quality.

At the moment, planning laws aren’t strong enough to provide truly sustainable environments that take human factors into account. Reform is long overdue, and designers, builders, planners and health professionals need to make a greater effort to find a more collective and coordinated way of working. But as a society, we must take joint responsibility: we can all make a start by learning how to change our our behaviour, to make the human aspects of sustainability a central part of our lives.