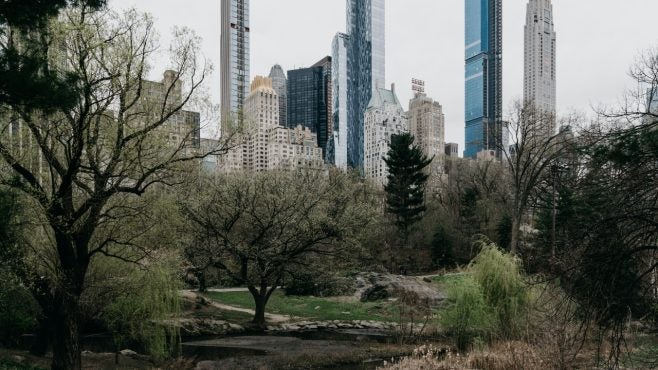 In 2014, scientists studying the soil in Central Park were surprised at the vibrancy of the microbial life they discovered. (Photo by Tetiana Photographer/Shutterstock)

City-based agriculture is on the rise. But urban soil is more often associated with contamination and risks to health. However, the earth in our parks, gardens and roadsides actually underpins many aspects of daily life. As a recent research paper highlights, urban soil hosts wildlife, stores water, provides food, helps combat the climate crisis and improves well-being.

In other words, soil provides multiple ecosystem services: the benefits we derive from the environment.

Soil is anything but inert material. In New York’s Central Park, researchers in 2014 were surprised to find the breadth of microbial diversity in the soil was similar to that found across the world including in Arctic, tropical and desert soils. Less than 17% of the 167,000 kinds of microbes they identified in the park had ever been discovered before.

Urban gardens can be hotspots for biodiversity too. People tend to plant lots of different things or leave the soil undisturbed, both of which allow soil biodiversity to flourish.

Soil is the largest terrestrial store of carbon on the planet, storing nearly twice as much carbon as that in all living plants and the atmosphere combined. Urban soil does this too, preventing large amounts of carbon from reaching the atmosphere as CO₂.

Soil also stores water, which helps prevent localised flooding in built-up areas. Increasingly cities are installing what are known as sustainable drainage systems (SuDS), such as swales and rain gardens. These are planted areas with shallow dips or hollows that can hold excess rainwater run-off, allowing it to slowly infiltrate the soil and prevent drainage infrastructure from being overwhelmed.

In east London, for example, the Derbyshire Street Pocket Park has seen the fenced-in dead-end of a residential street (which mostly hosted flytipping) transformed into a cycle path and community space, with permeable paving, planters and trees. Crucially, the road and pavement were partially dug up and replaced with turf and planting beds.

And then, obviously, there are the nutrients soil provides for the trees and plants that are vital in cities. Urban heat islands, which lead to higher urban air temperatures than surrounding rural areas, can be reduced by vegetation.

Trees and plants also capture air pollution and improve urban air quality, as well as proving the social and aesthetic benefits of green spaces for improved health and well-being. But urban trees often fail to survive due to soil compaction or inadequate soil volume. It follows that if we want the benefits of trees, we need to think about the soil first.

The problem is that we do not. Urban soil is often mistreated. In construction projects, the reuse of materials needs to be carefully planned to avoid soil being designated a waste material. In 2016, soil made up an incredible 55% of material sent to landfill in the UK.

Soil not sent to landfill can be stripped and stockpiled elsewhere until needed – sometimes for years. This depletes it of oxygen and kills the organisms it hosts. If the soil remains on a construction site, it is often heavily compacted. Here the soil structure – the arrangement of soil particles and pore spaces within it – is damaged, which in turn restricts the movement of air, water and roots.

Cities are under pressure to expand. As new housing, roads and urban developments are built, more and more areas of soil are being sealed with impermeable surfaces, preventing soil from providing its many benefits.

To add to this, there has been a recent upsurge in the replacement of garden lawns with plastic turf grass. This threatens to rapidly degrade soils in urban gardens and the many ecosystem services they provide.

What can we do?

Urban soil needs to be included in urban planning and design. On construction sites, it urgently needs to be reframed as a useful resource and dealt with accordingly, so that it doesn’t head to landfill.

The construction of London’s Queen Elizabeth Olympic Park involved an extensive clean-up to treat soil contaminated (with oil, petrol, tar and heavy metals, among other things) through decades of industrial use. Soil hospitals were created on-site to undertake soil washing (to remove the smallest particles that the contaminants adhered to) and bioremediation (in which microbes are used to degrade organic contaminants). Over 80% of the soil was then reused to create new parkland.

In New York, meanwhile, the Clean Soil Bank project sends excavated soils to other construction sites where needed, preventing it from going to landfill.

This type of intervention tends to only happen on large-scale construction sites. But if you have a garden there are a host of things you can do to help your soil.

Increasing organic matter by adding compost or mulch helps improve soil structure, and water-holding capacity provides better nourishment for plants and contributes to carbon storage. Letting the grass grow longer and planting perennials (and trees and shrubs, if you have the space) will allow more extensive roots to grow, which adds carbon to the soil. Lastly, avoid tilling or turning over the soil too much as this speeds up the decomposition of organic matter and releases CO₂ into the atmosphere. If you need to dispose of excess soil, try advertising it locally to people who may have a need for it rather than sending it to landfill.

These might seem like small changes. But with 87% of UK households having a garden, and an estimated 300,000 people digging in allotments, they can make a big improvement to the soil on which our cities are built.

Roisin O'Riordan is a PhD candidate, Soil and Ecosystem Services, Lancaster University.
Websites in our network