Since the first squatters arrived in 1971, the self-proclaimed Freetown of Christiania has inspired radical thinking and social experimentation. Affectionately described as “loser’s paradise”, the squat became a haven for young people unable to access affordable housing in Copenhagen, and activist pioneers from all over the world.

In July 2012, Christiania struck a deal with the Danish state to “normalise” its status. The change was fraught: after 40 years of illegal occupation, a community of activists fiercely opposed to the idea of private property had to establish a foundation and purchase the entire site, with the exception of some features, which were heritage listed.

The deal enabled Christiania to buy itself free of speculation, as a common resource for everybody and nobody. Today, Christiania receives hundreds of thousands of visitors each year, making it the most popular tourist destination in Copenhagen after Tivoli Gardens and the statue of The Little Mermaid.

Growth and the good life

It’s considered normal for cities and states to measure success in terms of economic growth. But critics point to the treadmill of addictive consumption, property speculation, long working hours, debt, waste, one-upmanship, fast food and short-lifespan technologies that unending growth sets in motion. Opposing this trend, communities such as Christiania pursue “degrowth” by prioritising human relations over market relations; maximising sharing, togetherness, social justice and the health of the planet.

The pressures to conform with mainstream society can be divisive for the 800 or so residents managing their lives communally in Christiania. Big decisions are made through a decentralised democratic structure: 14 area meetings and a “common meeting” must reach consensus between artists, activists and cannabis dealers on Pusher Street. 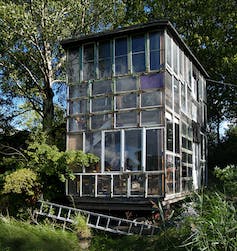 In 2012, a minority of residents wanted to be allowed to buy and sell homes that they had built or renovated for themselves. The final deal with the Danish state prevented this. Residents have the right to occupy, but not to buy or sell their homes or businesses. The whimsical variety of domestic architecture that has evolved makes Christiania visibly distinct from surrounding up-market neighbourhoods.

I know from my brief time living in Christiania as researcher in residence in 2010 that degrowth values were practised there long before this term became associated with a broad movement of alternative, ethical and ecological actions. 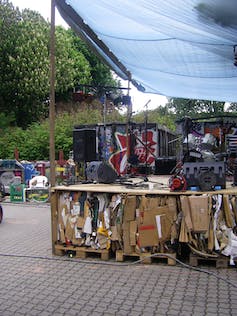 Stage made from compressed cardboard for ‘Dancing at the Trasher’, 2010. Image: Helen Jarvis.

From the outset, it was the Christiania way to renovate and adapt rather than to tear down existing buildings, and to build with reclaimed materials at minimum costs. This also made it possible to get by on a low income, with reduced hours in paid employment, giving residents a way to resist the earn-to-spend treadmill.

Christiania is known as a place where nothing goes to waste. Numerous craft skills and social enterprises thrive on a culture of making do and mending. Elsewhere in Copenhagen similar local livelihoods fail to flourish under profit maximising conditions. The community has won prizes for comprehensive garbage collection and recycling. The collectively run Green Hall trades in salvaged and repurposed building materials.

This summer, Christiania hosts a festival of degrowth, to show that it is ethical and green to resist the burden of conspicuous consumption. The festival coincides with an exhibition of archives on the history of the place, which forms part of the sixth International Degrowth Conference taking place just across the Öresund Bridge in Malmö, Sweden. 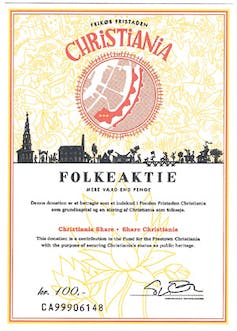 One example of grassroots degrowth since 2012 is the 12.8m Danish Kroner (£1.5m) raised from a social model of investment: the “People’s Christiania Share”. The scale of this crowdfunding (shares are symbolic and have no financial value) outstrips previous experiments with alternative currency. These include payment of a Christiania wage for community jobs – for example, working in the bakery, gardens, laundry, waste collection or machine hall – which functions much like the degrowth policy of basic income, where everyone is paid a minimum stipend.

By comparison, police estimate the cannabis market on Pusher Street to be worth 635m Danish Kroner (£74m) annually. While social models of investment benefit Christiania, profits from the hash market drive growth and speculation elsewhere. Recognising this conflict, residents chose in May this year to shut down Pusher Street temporarily. Younger residents are driving this shift from individual freedom (to profit from criminal activity) to mutual responsibility (for future generations and the planet). This coincides with broad based support for the recent crackdown on intimidating cannabis markets in Christiania.

The festival of degrowth will introduce visitors to a “village of alternatives”. My research shows that Christiania is an inspirational space to think differently about conventional standards of living, precisely because of the absence of private property. A collective shift in mindset can be achieved here, which would not be possible in neighbourhoods of conventional single family homes.

Yet puzzles remain, when it comes to practising sustainable degrowth at scale. One reason why Christiania’s car-free landscape is so “magical” is that residents live at remarkably low density: at first glance, they seem to live in a public park.

While this site might otherwise be expected to accommodate several thousand people in high density social housing, the legal safeguards of the 2012 deal endow Christiania exceptional experimental status. This allows residents to take risks with living creatively on a low income, enjoying close friendships in place of material consumption.

There are lessons here for places where degrowth is dismissed as impossibly Utopian, limited to fringe green debates and reduced goals of “sufficient living standards”. In the UK, state sponsored private property and ownership impose smaller private homes, rather than collective ownership of private and shared spaces.

But from Christiania, we learn that smaller private spaces only benefit sustainable degrowth when combined with collective ownership and generous community space for shared use: people come together to share skills and collectively manage scarce resources to reduce consumption. The hope is that as young green activists gather in Christiania this summer, thousands of visitors will look favourably upon collective living as the new normal.

This article is from the CityMetric archive: some formatting and images may not be present.
Topics in this article: Cities