Canada is a suburban nation. More than two-thirds of my country’s total population now live in the suburbs, meaning policy-makers must deal with the multitude of issues regarding this suburban explosion.

In all our largest metropolitan areas, the portion of suburban residents is higher than 80 per cent, including the Vancouver, Toronto and Montreal regions. The downtown cores of these cities may be full of new condo towers, but there is often five times as much population growth on the suburban edges of the regions.

In a 2013 article in the Journal of Architecture and Planning Research (JAPR), our research team found that 66 per cent of all Canadians lived in some form of a suburb. That figure was based on 1996 and 2006 census data. 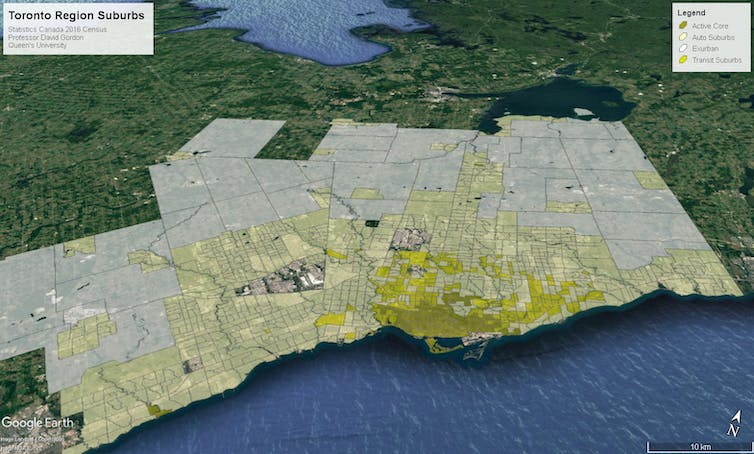 The suburban sprawl in the Toronto area. Image: author provided.

As you can see in the above Google Earth map of the Toronto area, we classified the neighbourhoods in Canada’s Census Metropolitan Areas (CMAs) into four types:

In the new census data, our research team found that within Canada’s metropolitan areas, 86 per cent of the population lived in transit suburbs, auto suburbs or exurban areas, while only 14 per cent, as mentioned above, lived in active core neighbourhoods.

The 2006–16 findings show that the population of Canada’s auto-dependent communities is growing much faster than the national growth rate, which has significant policy implications when it comes to public health, transportation, education planning, electoral issues and community design.

The national pattern is similar regarding construction of new residential units, though not as extreme. That’s because new housing units in the active cores have about 40 per cent fewer occupants than those in auto suburbs, according to 2016 data.

Even if dwelling units are a growth measure, 78 per cent of new dwelling unit growth from 2006-2016 occurred in the less sustainable auto suburbs and exurbs.

Many people over-estimate crowding and traffic in highly visible downtown cores and underestimate the vast growth happening in the suburban edges of our metropolitan regions.

The population in low-density auto suburbs and exurbs is still growing five times faster than inner cities and transit suburbs across Canada.

Despite their inner-city condo booms, even the Toronto and Vancouver metropolitan areas saw 3.4 and 2.4 times as much population growth in auto suburbs and exurbs compared to active cores and transit suburbs.

Canada is, in fact, a suburban nation, and its population became more suburban from 2006–16, despite the planning policies of most metropolitan areas. 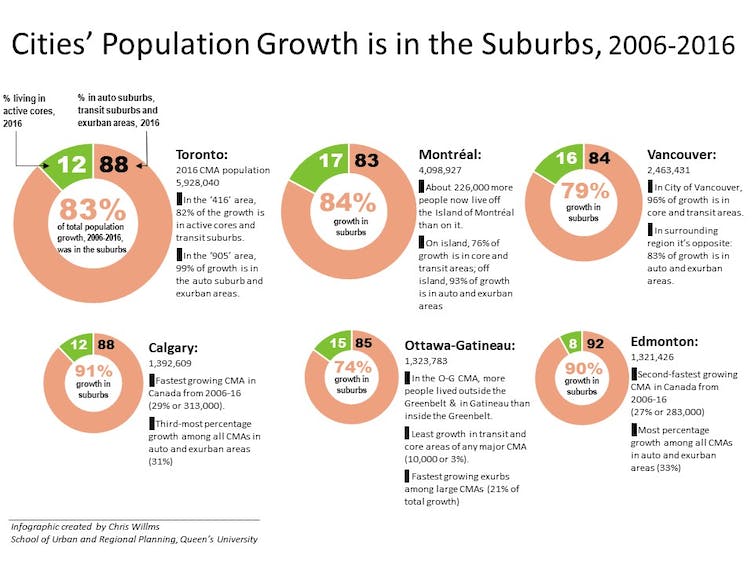 Preliminary 2016 census analyses in some CMAs show that the past decade of municipal intensification policies is finally having an effect on the location of dwelling units, but the large majority of population growth still continues to occur in automobile suburbs and exurbs.

This means policy-makers must:

This article is from the CityMetric archive: some formatting and images may not be present.
Topics in this article : Suburbs
Websites in our network