Two years ago, Innocent Eteng left the city of Port Harcourt, Nigeria’s oil capital. It was a tough choice, considering how, nearly two decades ago, he had received this city warmly, charmed by its green trees and gardens. 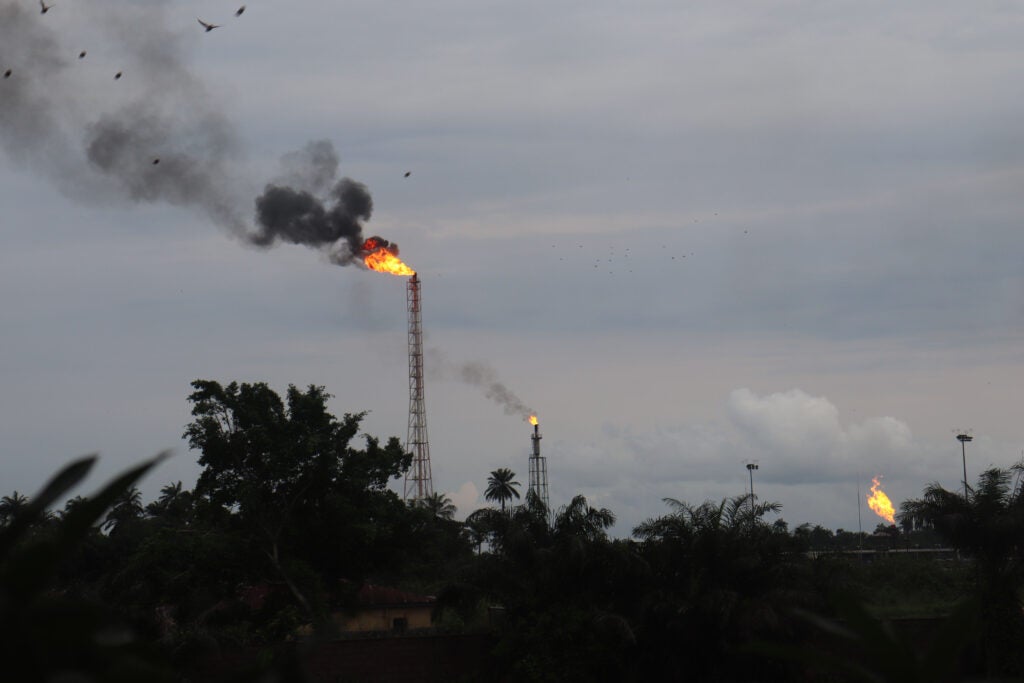 The black soot that plagues the city of Port Harcourt has been linked to artisanal refining of stolen crude oil. (Photo by Orji Sunday)

But in 2016, a change occurred that would drive him away. He observed a blanket of dark clouds hanging low over the city most mornings, like fumes from a belching old car. The sun’s rays were blurred at times from his window. The rains came down as dark droplets; buildings and trees were obscured by the smog.

But even as these changes became harder to ignore, residents kept their concerns about it to themselves, much like a secret oath. Eteng regularly wrapped a handkerchief around his nose. Windows and doors were kept shut. Surfaces were always in need of scrubbing with water and soap due to polluting black soot. Limits on outdoor activities increased. But only a few people, like Eteng, saw the soot as a harbinger of a bigger crisis to come.

Oil accounts for 70% of Nigeria’s government earnings and 90% of foreign exchange in the Niger Delta. The region has been plagued by environmental pollution from oil spills, gas flares and, more recently, extreme heat.

“When I woke up in the morning,” recalls Eteng, “I [would] take the handkerchief and swipe it into my nose. I could see black particles in the mucus. If I placed a mosquito net across the bed, in three days’ time, the white surface had turned black.”

Things came to a head by 2018 as public outcry took the form of protests, petitions and the Twitter hashtag #StoptheSoot. A citywide protest attracted thousands, including Eteng. Having declared the situation an emergency a year earlier, protesters claimed that the government failed to take any concrete steps to clean the air. The state government created a Black Soot Taskforce to clamp down on select asphalt companies and vulcanisers, an effort that recovered thousands of tyres. 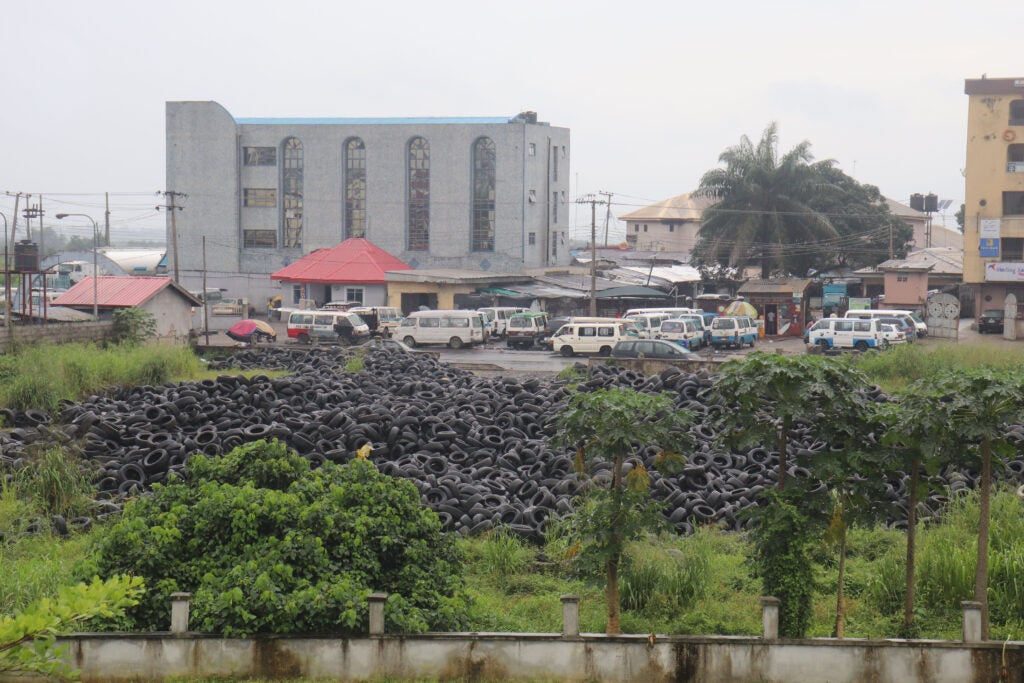 Tyre stockpiles like this one in Port Harcourt create a great health and safety risk. (Photo by Orji Sunday)

The response wasn’t enough for the protesters, many of whom felt it was designed only to make people think the government was fixing the problem. “I figured that if I stayed in Port Harcourt a little longer, the situation could be very dangerous to my health,” says Eteng, who left the city in 2018.

The fizzling-out of the protests didn’t mean the end of the black soot, which the government says comes largely from unrelenting oil bunkering – a widespread oil theft carried out by youths at night in hundreds of creeks across the Niger Delta region. The youths puncture crude-oil pipelines and channel the leaks with long tubes into bushes. The stolen fuel is refined in the bush through makeshift illegal refineries and sold in black markets. The process of refining the fuel, usually with crude tools and methods, is highly toxic. The crude-oil bunkering industry is huge in Nigeria and operates across a vast, discreet and organised supply chain, which sells the product of these so-called bush refineries in black markets throughout the country.

The Nigerian military has targeted these refineries, burning hundreds of them in the past few years during raids in the creeks. This destruction furthers pollution in the region, which is plagued by polluting practices ranging from the burning of tyres and refuse, the heavy industrial machines used in the production of asphalt and fertiliser-producing firms. The challenges are only worsening – a recent study estimates that there are five times the number of refineries as there were just five years ago. During the same period, total supply chain earnings increased 24-fold to £578.5 million in 2017. These profits put in the hands of the few make it easy to see how corruption plays such a big role in the crisis.

Multinational oil companies such as Shell, ExxonMobil and Chevron, which have been operating in Nigeria since the 1950s, when the country began oil exploration in commercial quantities, are a major cause. These companies flare around 800 million standard cubic feet of gas from more than 140 points across Nigeria every day.

Though the factors that first led to the black soot have been around for decades, it was not until 2016 that its impacts became more pronounced in Port Harcourt. In 2018, the soot peaked and anti-soot activism rose. Today, the damaging health and environmental impacts persist, and environmental activists believe that the government is not truly committed to ending the crisis.

“We [civil societies, environmental campaigners and health workers] have tried to get the government to act. No one is being held responsible for the crisis, because the government is more interested in taking the resources that comes from the region than protecting the lives of its people,” says Kentebe Ebiaribor, a Port Harcourt-based environmental-justice campaigner.

The reasons for inaction are many.

Corruption is rampant here, which means the country’s laws and regulatory policies are rarely enforced. Penalties, when they are invoked, are mild or ignored because the actors behind the soot pollution, says Ebiaribor, are typically powerful enough to avoid sanctions. Activists claim to have received death threats or blackmail, which has forced many of them to silence their efforts. “In a place where there is a huge risk for doing the right thing, people are so terrified to hold the government accountable in this kind of situation,” says Sunday Enum, a resident of Port Harcourt.

The government claims to be working on it, according to Dr. Igbiks Tamuno, who heads the Rivers State’s ministry for environment – the key agency at the centre of ending the black soot. But Tamuno didn’t honour multiple scheduled interviews where he could have provided further details about the government’s efforts. 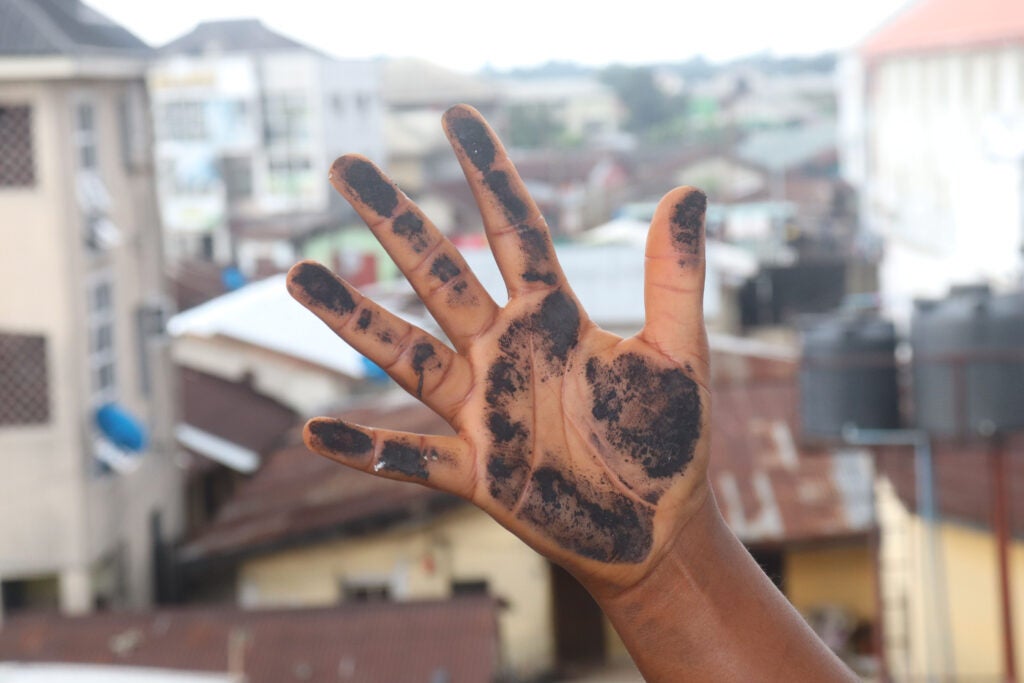 Doctors in Port Harcourt warn that if the situation festers, more than 6 million residents face the risk of cancer in the next few years. The threat, as seen above, is visible. (Photo by Orji Sunday)

Nigerian public-health experts say that prompt action is crucial, as further delays may fuel a tragic health outcome for the city’s 3 million residents. Already, the outlook is bleak: a recent study of 11,000 children at the state-owned Braithwaite Memorial Specialist Hospital in Port Harcourt revealed that the prevalence of acute respiratory infections (ARI) among children under five jumped nearly 50% between 2015 and 2016, the outset of the soot. Children and the elderly are particularly vulnerable.

Soot particles are microscopic, each just 2.5 micrometres in size, 30 times smaller than human hair and able to creep into the nose, lungs and bloodstream, where  they can cause significant damage. Soot poisoning has been linked to a variety of illnesses, including asthma, infertility, breathing difficulty, skin irritation, bronchitis and cancer. Doctors in Port Harcourt warn that without action, more than 6 million residents face the risk of cancer in the next few years.

For now, says Best Ordinioha, a professor of community medicine at the University of Port Harcourt, “people are suffering, but they are trying to live with the crisis. Some of them know that this is a great danger to their health, but cancer [and other diseases associated with soot] is a slow poison and may take as many as ten to 15 years to manifest. That’s why it’s not an immediate priority for most residents of the city.”

Awareness of the issue is not widespread, Ordinioha explains, as people are so absorbed in their daily struggle to survive that it’s nearly impossible to persuade them to spare a minute to protest for their health. While life expectancy for the rest of Nigeria increased for men by seven years (to 63.7) and eight years for women (to 66.4), between 2006 and 2016, in the Niger Delta – including Port Harcourt – it dropped to between 40 and 43 years as a result of pollution, according to the UN Environment Programme (UNEP).

Globally, outdoor air pollution killed more than 4.2-million in 2016 alone. Soot is a major driver of those numbers in low and middle-income countries such as Nigeria, where over 93% of the population is exposed to extreme levels of air pollution – an amount far exceeding the World Health Organisation’s recommendation. Health workers believe there has been a surge in cases of heart, lung and blood vessel diseases in the past four years in Port Harcourt, but poor record keeping means that the exact estimates are imprecise and – in most cases – underestimated.

Back in Port Harcourt, many residents like Eteng have had enough. At least anecdotally, significant numbers of residents intend to relocate, and know others that do. Nigeria has over 35 major cities for people to choose from; most people are headed for those with less pollution and cleaner air. One of those planning his departure is Enum, an architect in his late 20s, who has lived in the city for more than six years.  “I am worried about the situation,” he says. “I won’t want to raise my kids in this kind of city.”

Orji Sunday is a freelance journalist based in Nigeria.
Websites in our network