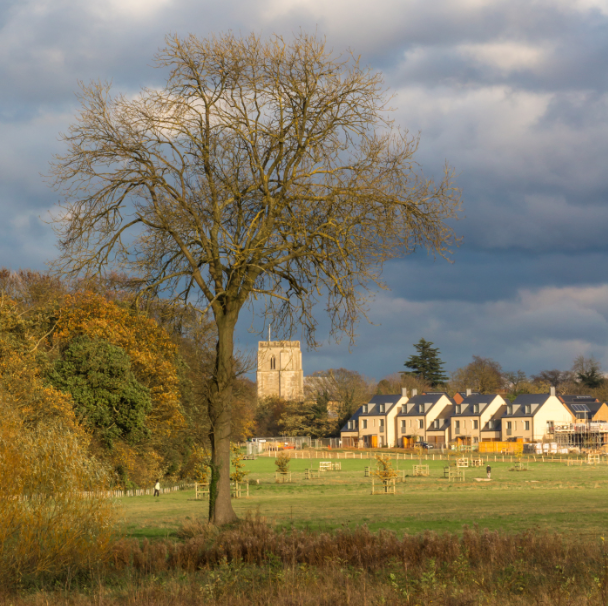 On the outskirts of Cambridge, England, butterflies flutter against the breeze above wildflower pastures and shimmering grasslands. Dragonflies, down by the river, waft similarly around a watery habitat shared with trout, otters and the majestic kingfisher. This oasis of nature is Trumpington Meadows, a 1,200-home community where wildlife protection meets something rather surprising: city expansion.

“It was just agricultural land lacking in biodiversity, and a housing firm wanted to build thousands of houses on it, so they entered into an agreement with the local wildlife group to do it in an ecologically friendly way,” explains Craig Bennett, CEO of the UK’s Wildlife Trusts, which helped oversee the project, 80% of which is open space.

As area was cleared for the mixed-use community (which will have shops, a primary school and a community centre), great tracts of adjacent farmland were joined together, creating a huge expanse for flora and fauna to flourish. The result was something remarkable: urban development that actually helped, not harmed, the natural world.

If Britain is to meet its ecological targets, which include the recovery of “iconic or economically important species of animals, plants and fungi”, schemes like Trumpington Meadows are needed on a much wider scale, says Bennett – and, crucially, they need legal protection. The effort is different from, say, green-belt land, which is legally exempt from development but has no biodiversity obligations (which explains why most of it is plain-old farmland).

Legally protecting wild-belt land would safeguard its biodiversity. To make that happen, Wildlife Trusts is calling for an entirely new planning designation that would encourage the use of land for natural recovery. Once that occurred, the biodiverse status of the land would be protected by law. These stretches of designated terrain wouldn’t just crisscross the countryside around urban areas but delve deep into the heart of city centres, creating a continuous pathway along which nature could prosper.

“We want to connect nature from the countryside all the way through to towns and cities, along river valleys, railway lines, roadside verges, on derelict plots and the corners of parks… what people might describe as ‘wasteland’, these are actually really good for wildlife,” says Bennett.

Yet there is clear evidence that nature can coexist harmoniously with urban life. The small German city of Dessau, for example, was something of a rewilding pioneer, tearing down communist-era tower blocks to create space for wildflower meadows in 2015. Today, the fields throng with songbirds, hedgehogs, butterflies and bees.

In London, eco-minded planners have taken a slightly different approach, endeavouring to weave bands of biodiversity around the city’s iconic architecture. “We’ve had some really fantastic sightings recently, including woodpeckers and the black redstart – a bird species that has been in steep decline,” says Emily Woodason, senior landscape architect at Arup, the design firm that helped devise London’s Wild West End scheme.

Also launched in 2015, the project set about connecting the city’s parks with biodiverse pockets dotted across rooftops, at street level and on the sides of buildings. Five years on, this “green corridor” is now teeming with wild birds, bats, pollinators and a resplendent array of plant life. For visitors and landlords alike, this is good news, says Woodason.

“We’ve seen a positive increase in people spending more time around the green spaces, and our monitoring shows people generally have a better perception of the area,” she says. “In turn, this has value to landowners, as it can have a knock-on effect of increasing revenue and potentially increasing property prices in the area, as well.”

There are also health benefits to be had, research indicates. When children are raised in urban surroundings without exposure to wild environments, they are at a significantly higher risk of ill health, experts at the University of Adelaide recently concluded.

“Greater biodiversity comes with the potential to reduce non-communicable-disease rates through improved training of our immune systems to fight illness and diseases,” explains Jacob Mills, the study’s lead author, adding that the findings could be grounds for city planners to weave more green spaces into their urban blueprints.

Other advantages of wild sites include the sequestering of atmospheric CO2 – the bane of congestion-choked towns the world over and a key driver of respiratory disease – and improving city dwellers’ mental health. The latter appears particularly true in big cities like London, where researchers last year found a “very strong relationship” between psychological well-being and residents’ proximity to green space.

Regardless, a measure of resistance to the sort of land use the wild-belt scheme entails is inevitable. Take Dublin, the Irish capital, where efforts to encourage the return of native wildflowers and invertebrate species haven’t always been welcomed.

“The initial reaction you can get sometimes, if you’re not spraying a lot of areas [with pesticides] and a lot of weeds are growing, is people saying, ‘Why are you not managing this area?’” explains Lorraine Bull, Dublin City Council’s biodiversity officer.

But this traditional view – that urban green spaces should be neat and tidy – is starting to shift, she thinks, thanks in part to community education schemes that outline the merits of returning land to nature. 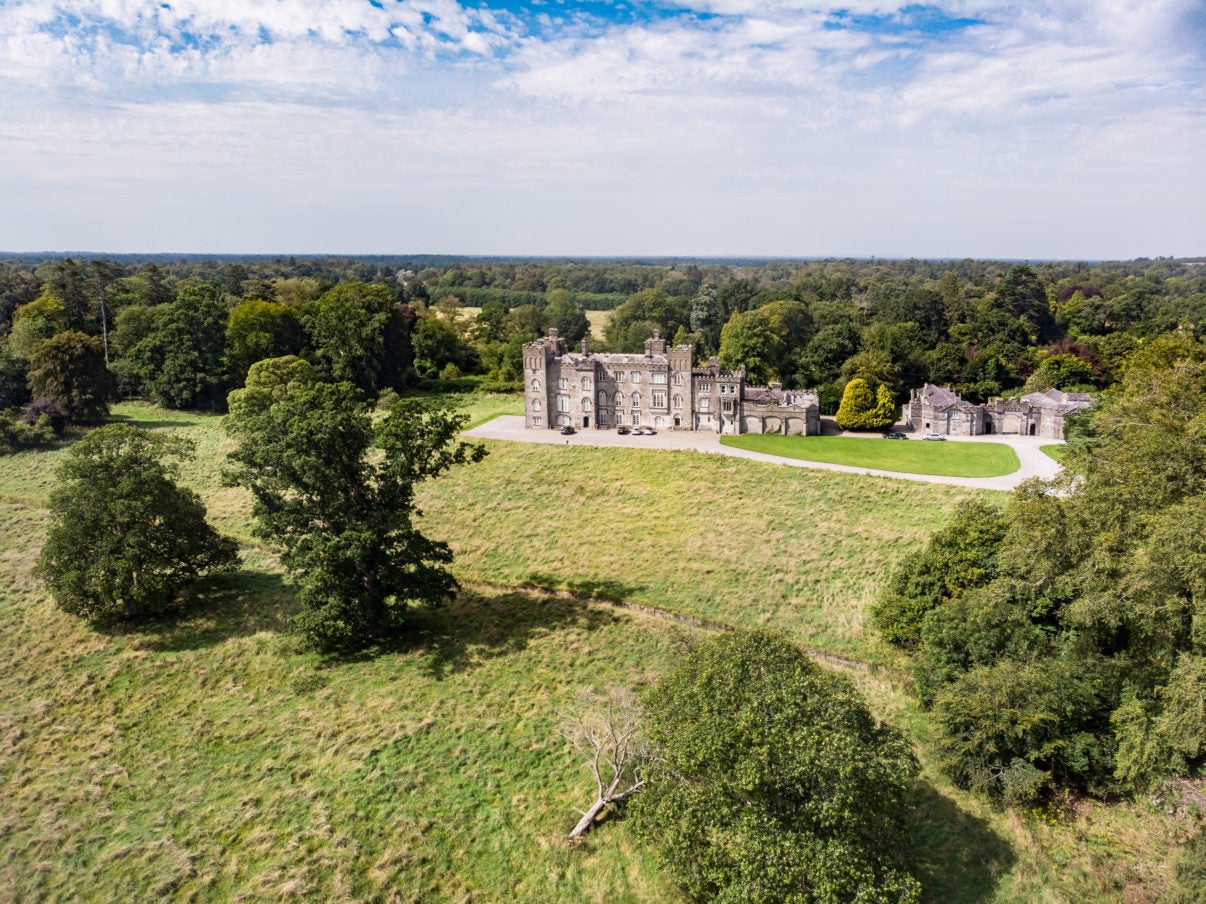 The 750-acre Dunsany Estate near Dublin has been undergoing a rewilding process since 2014. Otters, martens, foxes and bats are among the wild species that have returned. (Photo courtesy of Dunsany Nature Reserve)

“Whenever I’m doing a talk, I always focus on the fundamentals of biodiversity, that it gives us our clean air, our clean water and our food,” Bull says. “It’s really, really important in a town and city context as well as a rural context to preserve as much biodiversity as possible. Over the last few years here in Ireland, there has been much more public buy-in of that.”

Perhaps harder to reconcile is the urgent need for new affordable housing. With upwards of eight million citizens living in overcrowded, unaffordable or low-quality homes, Britain is in the throes of a full-blown property crisis (and any attempts at greening must prioritise retaining longtime residents). Correcting this requires the construction of at least 300,000 new builds every year, action groups argue, an aim they say must not be superseded by ecological ambitions, however well-intentioned.

“Biodiversity is super-important,” says Ryan Young, director of housing campaign group PricedOut. “But we need to consider how high house prices and rents are in an area and how great the need is for new homes.”

With both camps eyeing scarce inner-city space, it’s on so-called “brownfield” land – previously developed urban sites that have fallen into dereliction – that housing and environmental imperatives might clash the most. This would be particularly likely if a plot had good transport links (crucial for the success of any new housing development) – in which case “the net social good from rewilding would not be anywhere close to that from building homes there”, says Young.

But the two need not be mutually exclusive, maintains Wildlife Trust’s Bennett, highlighting the success of the Trumpington Meadows scheme in satisfying both housing and biodiversity ambitions. “Imagine”, he says, “if when you got to a city, you knew you’d arrived because you see a big buffer of nature surrounding it, protecting the city and contributing to the well-being of its citizens. Wouldn’t that be amazing?”

Ultimately, says Bennet, this is what the future of urban planning must be all about – nature and city life operating in synchrony, aiding each other.