Cities around the world have had difficulties balancing the interests of visitors with the needs of residents, as holiday rental platforms such as Airbnb have grown in popularity and size. Evidence shows that the conversion of rented homes to short-term accommodation contributes to housing shortages, raises house prices, speeds up gentrification and erodes local communities.

Cities including Amsterdam, Berlin, Barcelona and London have acted to curb these negative effects, imposing new taxes or limiting the number of nights that a property can be rented out. Today, Venice is one of the worst affected cities: the resident population has fallen to its lowest level in centuries and city leaders are looking for ways to mitigate the ill effects of mass tourism.

Yet the city also has a long history of managing the pros and cons of migration and tourism, and finding ways to profit from – but also integrate – foreigners. Indeed, in Renaissance Venice, a huge influx of foreigners fuelled the rise of a large informal lodging sector, which was difficult to tax and regulate and had a major impact on the urban community. Sound familiar?

By the 16th century, Venice was the capital of its own huge empire and a major crossroads of trade and travel between mainland Europe and the Mediterranean. At the same time as painters including Titian and Giorgione were making the city a centre of Renaissance culture, the population surged from around 100,000 to nearly 170,000 in just 50 years.

Unlike today, the people drawn to Venice at the time were mostly international merchants and entrepreneurs, migrants looking for work in local industries, or refugees from war and hunger. But the first tourists also arrived in this period, such as the French writer and nobleman Montaigne, who came to explore the city’s cultural treasures. And all of these people needed somewhere to stay. 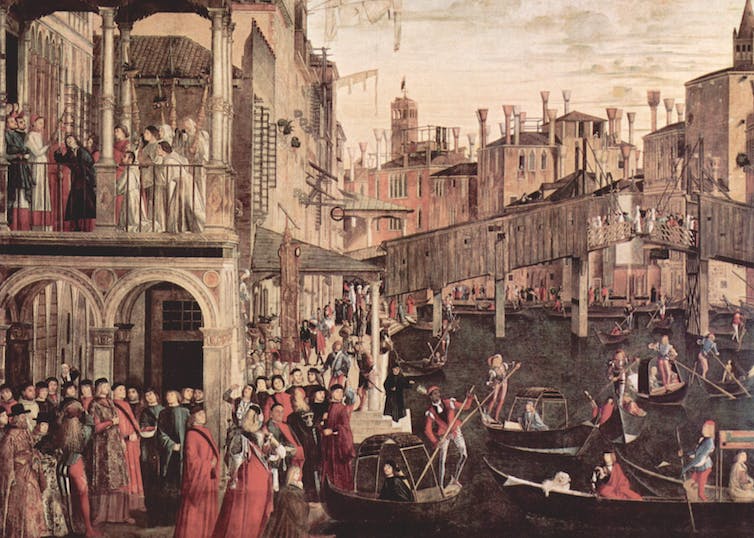 My research has shown how hundreds of ordinary Venetians at this time saw a chance to make money on the side by renting rooms or beds. Many were women who struggled to earn a living in other ways: people like Paolina Briani, who in the 1580s rented rooms to Muslim merchants from the Ottoman empire, in her home a few minutes’ walk from Piazza San Marco.

By opening up their homes to migrants and travellers, these accommodation providers – unlike the mostly absentee Airbnb owners of today – shared intimate spaces with people who spoke different languages and practised different religions.

The rapid growth of this informal economy of lodging alarmed the Venetian government. Fearing the spread both of diseases and of threatening political and religious ideas, the government was anxious to regulate and monitor the presence of foreigners in their city. They also wished to minimise competition with the city’s licensed inns – a profitable source of tax revenues.

So, a bit like today, the government made efforts to register and tax lodging housekeepers, and force them to report on the movements of their tenants. Though this regulation was very difficult to enforce because of the informal nature of many lodging enterprises, Venice’s rulers did not try to eliminate this sector altogether.

While wanting to control the movement of people, they also saw that migrants and visitors were crucial to the city’s economy and its cultural power. They wanted to welcome anyone who brought valuable goods, innovative ideas or essential manpower.

At the same time, the government took into account that ordinary Venetians – especially vulnerable and poor groups such as widows – also profited from the influx. And the money that residents made by offering lodging might be essential to their survival.

To be sure, Venice’s authorities did not welcome all comers. They took aggressive action to stop “undesirables” (such as beggars and prostitutes) from entering the city. They also put more and more pressure on religious minorities to live in segregated spaces – most famously the Jewish Ghetto.

But they also saw the benefits of promoting a diverse and flexible hospitality industry that could serve the interests of locals as well as visitors. Licensed lodging houses were allowed to flourish and, alongside the inns, became a central part of the city’s emerging tourist infrastructure.

Many newcomers who came to stay in residents’ homes – where they might learn something of the local language and customs – went on to settle and integrate into the community. In its regulation of the hospitality industry, Renaissance Venice struck a delicate balance between the interests of foreigners and locals, which was crucial to the city’s economic, cultural and political strength.

Today, such a compromise appears very difficult to achieve. There are differences between then and now: in the reasons people come to the city; in the nature of competing urban needs; and in the likely solutions and policies. But it seems that cities can take a lead from Renaissance Venice, and act to promote meaningful interactions between visitors and residents; for example, as Berlin has done, by banning people from renting out entire flats on Airbnb. The Venice of 500 years ago challenges people to think about “the Airbnb problem” in a more nuanced way.