A few days before Covid-19 brought Canada to a screeching halt, Eduardo Lafforgue considered a seemingly unanswerable question: How do you decide when your town is attracting more tourists than it can handle? 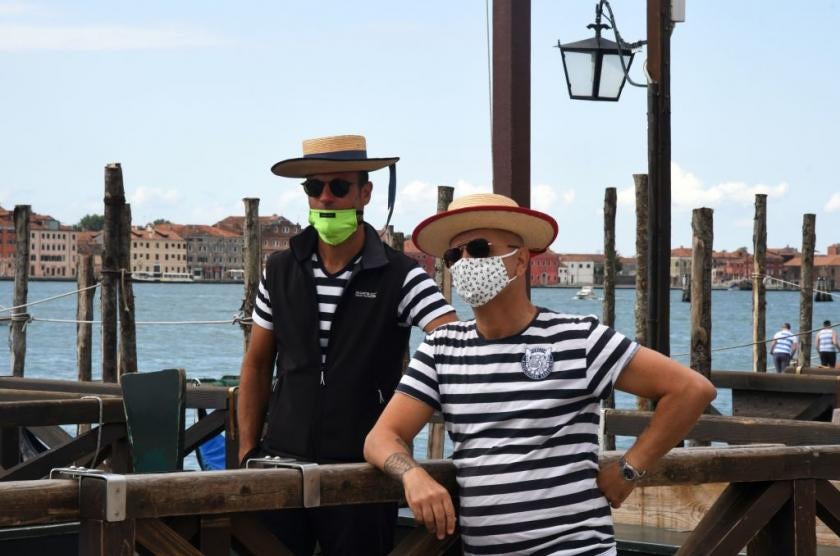 “I don’t have the magic answer,” he says. “If I did, I would sell the formula to Venice, Barcelona, and some other places that desperately need to know when to stop.”

Lafforgue runs the chamber of commerce of Niagara-on-the-Lake, a picturesque Canadian town a few miles north of Niagara Falls. In the summer months, it is thronged with tourists, who fill its painfully pretty main street, snapping photos of ice-cream cones and hanging baskets. In previous years, the town of 17,500 people has welcomed 3.5 million visitors – almost twice as many per capita as Venice. Lafforgue hesitates to call it overtourism, but the volume of visitors in recent years has been enough to vex local residents, who tell stories of picnickers setting up in their backyard, or taking their lounge furniture off the front porch.

Ordinarily, this time of year would bring dozens of tour buses to the town’s wineries. But more than two months since the start of the pandemic, visitors are staying home. Attractions that would typically bring them in, like the town’s annual Shaw Festival of theatre, have been cancelled or postponed. The nearby border between the US and Canada remains resolutely closed. The question of “how many visitors is too many” has seldom felt less relevant.

It’s the same story in Edinburgh, Venice, New Orleans, and so many other tourism-dependent towns: The problem of having too many visitors was abruptly replaced by the problem of having none at all. With tourism stopped in its tracks, the people and places that rely on it have little idea what happens next.

“Overtourism,” insofar as it has a fixed definition, describes a situation where a place has more visitors than its infrastructure can support. From the outside, the term might conjure up images of the scrum beneath the Mona Lisa or the cruise ships looming in Venice’s harbour. But for people living in places suffering from overtourism, the reality can be more traumatic. Whole apartment blocks in Barcelona’s historic neighbourhoods have been transformed into identikit Airbnb listings. Locals in New Orleans’ French Quarter describe being gaped at like zoo animals.

“I tend to think of it in terms of the health of the destination, which includes locals as a stakeholder,” says Rosie Spinks, the global tourism reporter for travel news company Skift. “When there are so many tourists, locals can no longer live a life that feels authentic to that destination – when you feel like tourism itself is an impediment to living in said place.”

As tourism has disappeared, the effects of building an economy around it are coming into stark relief. Without tourism revenue, jobs throughout the industry are in peril. Service workers in Lisbon, Paris, and umpteen other cities have been furloughed or are out of a job, while destination marketers, who are often funded by lodging- and tourism-related taxes, have found their work mothballed. In Edinburgh, for instance, Market Edinburgh was indefinitely “hibernated” in April, and its staff laid off. Cyprus has taken the unusual step of trying to attract visitors by promising to “take care” of any related costs if they contract coronavirus on their trip. 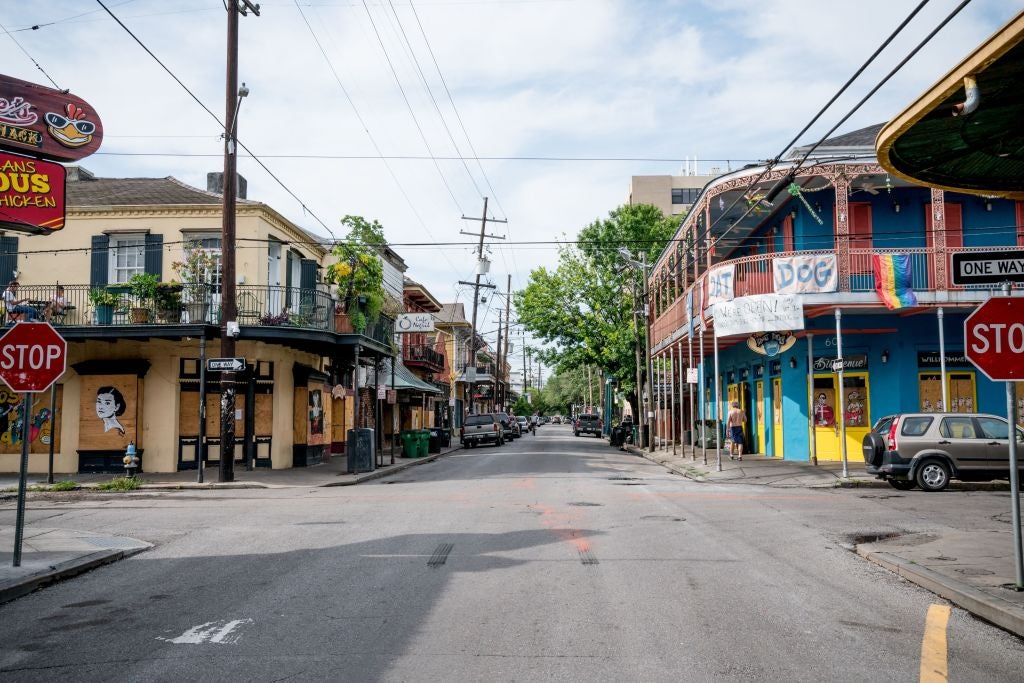 Usually packed with musicians, artists, locals and tourists, Frenchmen Street in New Orleans was nearly empty after the festivals and events were cancelled this spring. (Photo by Claire Bangser/AFP via Getty Images)

In heavily trafficked New Orleans, which was an early hotspot of Covid-19 in the US, the crisis continues to bite. Kevin Molony is a tourism industry professional and the co-founder of the New Orleans Sustainable Tourism Task Force, an independent group that works with the city to try to change its approach to tourism. He is also a long-term resident of its historic French Quarter.

In the past weeks, he says, three nearby stores have made the decision to close permanently – all “tourist-facing” businesses that he says did little to serve locals. He expects others, including restaurants and hotels, to follow. “Clearly there’s going to be a fallout of tourism enterprises,” he says, “and that’s a painful, painful thing.”

The amount of relief available to these cities varies significantly. Many governments have seen their funds depleted by the health crisis. But there are a few bright spots, including an €18 billion ($19 billion) bailout package for France’s tourism sector, with €1.3 billion earmarked for direct cash injections into businesses by state banks. In New Orleans, the city’s convention centre donated $1 million to struggling hospitality workers after a large union threatened to cancel its 2021 convention over a lack of support for furloughed workers.

Recovery is beginning, but slowly. A first trickle of mask-wearing tourists has begun to return to some towns, among them Venice and New Orleans. But with businesses still shuttered and social distancing measures in place, the cities are shadows of their former selves – health risks aside, foot traffic is still too low for many businesses to justify a full reopening. Speaking to the Associated Press, Arrigo Cipriani, the owner of famous Venice watering hole Harry’s Bar, said it would remain closed for the foreseeable future: “We can’t think about opening with just five or six people” allowed inside at a time.

In some cities, local officials have asked tourists to stay away altogether. Speaking at a digital council meeting in May, Amsterdam’s Green mayor, Femke Halsema, said the city would be “extremely cautious” about welcoming tourists again, citing a “surprising shortage” of public space throughout the cities’ narrow streets and canals. “I know that there are 55,000 hotel beds waiting for guests,” she said. “But in the coming time we need to be extremely cautious about stimulating regional, national and international traffic. If we do this excessively, we run the risk that Amsterdam becomes the fireplace for a second wave [of infection].” In an effort to keep its own visitors at bay, Niagara-on-the-Lake was forced to enact a parking ban in its historic district.

It’s hard to find the silver lining in a global pandemic. But residents in many tourism-heavy cities, including New Orleans, Venice and Barcelona, have suggested that this almighty pause could serve as an opportunity to reassess their city’s relationship with tourism – or, at least, to stem the flow. Since 2000, annual visitor numbers to Barcelona have increased by more than 300%, creating a boom that’s accused of displacing residents, driving up property prices, and turning local stores into temples of tourist tat.

“The previous volume isn’t coming back anytime soon – and indeed we would be far better off never returning to those unsustainable pre-pandemic visitor counts,” Molony says.

It’s not about bidding the tourists adieu entirely, of course: “I don’t know a single resident who does not enjoy the presence of respectful culture-seeking visitors who are curious about our culture and about us, in the way we live,” he says. “But what we’ve been experiencing is an inundation of people who arrive in our historic centre, our historic neighbourhood, literally not even knowing that anyone lives here.”

The city’s mayor, Latoya Cantrell, has hinted that the locals could “reclaim” the historic Quarter, which is often maligned as a tourist trap. “We are looking at all possibilities,” she told local news station 4WWL. “Locals kind of taking over, taking back our quarter, taking back our flea market, creating larger scales of pedestrian malls, no cars in the quarter…”

Over 10 years of barely constrained growth, the tourism industry has often paid lip service to tackling overtourism and moving to a more sustainable model. But changes have been few and far between. Cities have historically been reluctant to stem the flow of valuable income, even if it comes at the cost of residents’ happiness or their environment. But with fewer tourists and more expensive flights a virtual certainty, as airlines consolidate, change may now be inevitable – ideally for the better.

More than that, some cities and providers may decide to move away from such an unstable industry altogether. “I think the memory of that – that this isn’t a given, that this is fickle – that might press on psyches more than maybe we think it will,” Spinks says. “And maybe that means saying, ‘Okay, we need to be less reliant on this one industry. We need to diversify.’”

Natasha Frost is a freelance journalist based in New York City.

Contributing writer to City Monitor.
Websites in our network