Sidewalk Labs, a Google company aiming to branch out into city planning, has come up with a futuristic vision for a chunk of the lakefront in Canada’s biggest city.

The plan for Quayside, a data-oriented high-tech neighbourhood in Toronto’s east end, has attracted a lot of attention because it seems to be “a built-form version of Facebook,” in the words of urban affairs expert John Lorinc.

But the proposed project’s risks go far beyond Google’s data collection and data use.

As an expert on the governance of urban development, with particular expertise in the growing use of public-private partnerships, I fear that the raging debate between “smart city” advocates and critics of big data may prevent Canadians from appreciating that the Google plan may involve software, but it’s a city plan, not an app.

As such, it represents a radical departure from the principles that have guided city planning in Canada since citizen participation and accountability came to the fore in the era of Jane Jacobs, a renowned Canadian-American urban planner.

Turning large areas over to private corporations so that they can not only build but even plan and control neighbourhoods or towns has happened in many Asian cities: Manila, Singapore and Hanoi have all witnessed the emergence of exclusive “Urban Integrated Megaprojects.” They may not have data sensors everywhere, but they otherwise resemble the Sidewalk Labs’ plan for Toronto.

Privatised planning also exists in democratic Western countries. In the Margaret Thatcher era, London saw the creation of several “Urban Development Corporations” designed specifically to go over the heads of local city councils, which were often dominated by Labour politicians opposed to such entities.

Local democracy has certainly had its ups and downs in Canada.

But unlike the situation in the UK, the federal government has no jurisdiction over city matters and so corporate involvement in urban planning has been more limited.

For example, next door to the proposed Google mini-city in Toronto, developer First Gulf is proposing to create a large office development in an area of the city that’s been dubbed East Harbour. The city of Toronto is allowing the developer to draw up a master plan covering not only the land it already owns, but also some adjacent areas.

This is somewhat worrisome because urban planning is first and foremost a key public function.

Working with the city

But as I saw at a recent community consultation meeting, First Gulf is working closely with Toronto urban planners and officials from the city’s parks department and public transit agencies.

In some cases they are even proposing details that exceed legal standards, and so the public interest seems to be front and centre. Of course, the profit motive has not disappeared. Local residents will need to stay vigilant.

Nonetheless, First Gulf is demonstrating that collaboration between private corporations and public bodies can serve the public interest.

A major difference between the East Harbour plan and the proposed Google project is that the Google folks have not approached the city in the usual, highly regulated manner, but have been negotiating, in secret, with the arms-length Waterfront Toronto. 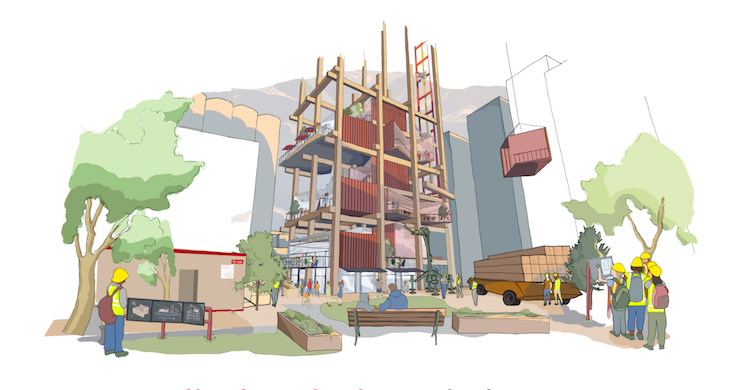 A sketch of Sidewalk Labs’ plan for housing in its proposed Quayside development in east-end Toronto. Image: Sidewalk Labs.

Waterfront Toronto, a tri-government agency set up in 2000 to develop Toronto’s post-industrial waterfront, has facilitated many good projects. But like other agencies and commissions that have been spun off by governments, it lacks transparency.

Such agencies may very well do good work, but they operate much like private corporations. Their political masters sometimes hold them to account, but citizens have no idea who’s in charge or why they make the decisions they make.

In contrast, city staff operate under the glaring light of compulsory transparency. The Waterfront Toronto board of directors — political appointees, overwhelmingly from corporate backgrounds — held a closed meeting in October after giving its own real estate committee less than four days to look at the Google plan.

It quickly proceeded to a big photo-op featuring Prime Minister Justin Trudeau, without the release of either the agreement itself or any prior studies that would justify its development.

City staff, who have noted that even their waterfront planning experts were not consulted, have recently raised important issues regarding potential conflicts between Google’s ambitions and public laws and policies. For example, the city has a fair procurement policy that would not allow it to let a big U.S. company have any kind of monopoly.

Even more worrying, Waterfront Toronto has declared that so-called Sidewalk TO will begin with the 12-acre Quayside, but “will then expand to 325 hectares (800 acres).”

“Will” is a peculiar word here.

Google does not own any of the land, so it’s not even in a position to seek development permission, much less approve its own plans.

The city has other ideas

For the larger 800-acre area, known as the Portlands, Toronto’s city council recently approved its own, much-discussed plan, one that focuses on preserving film studio space and makes no mention of Google.

At a recent University of Toronto panel on the proposal, the vice-president of Waterfront Toronto, Kristina Verner, was confronted with the discrepancy about what land is actually in play.

She explained that the plan would only come to fruition if Google’s Sidewalk Labs was given control over the larger area. Because the city appears reluctant, for good reason, to give important city planning powers about an 800-acre expanse to an American corporation, the agreement could fall apart.

Nonetheless, other corporations could easily be inspired by the much-touted Google plan to propose smart-city, tech-oriented neighbourhood plans to other municipalities.

Corporations are not responsible to the people. And politicians can easily be seduced by visions of high-tech jobs. Only citizens can remind politicians that city building does involve deals — but only deals that have the public interest at heart, deals that respect public laws and policies.

This article is from the CityMetric archive: some formatting and images may not be present.
Topics in this article: Cities, Smart cities