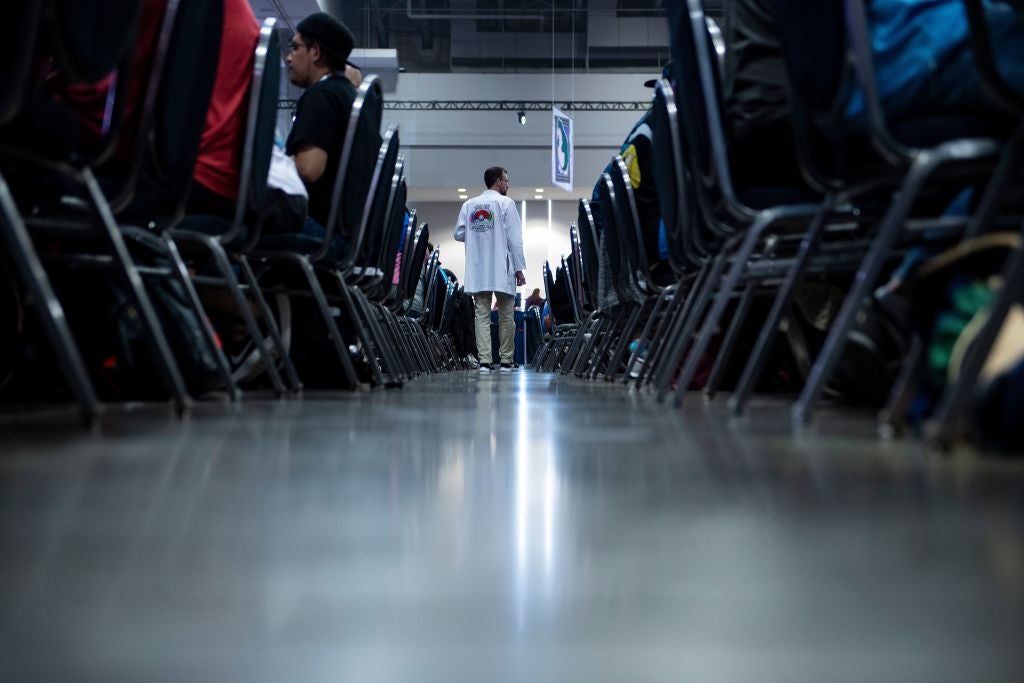 One study found that the events industry contributed $184bn to the US economy in 2017. (Photo by Brendan Smialowski/AFP)

Before the pandemic hit, Casandra Matej occasionally found herself fending off accusations from locals that downtown San Antonio had become overrun with conference attendees.

The city has a population of around 1.5 million, and in a normal year around half that many people again visit for conferences at its Henry B. González Convention Center. As the president and CEO of Visit San Antonio, Matej wants locals to appreciate the economic impact these visitors bring to the city.

“I say, ‘Do you own a home or a condo? Because of the amount of visitors that we have to the city, we save you upwards of $1,800 a year on your property tax,’” she says. “Maybe the message hasn’t been clear enough that actually the visitor trail has a domino effect on even the residents of our community.”

In cities that are popular destinations for conventions, the meetings industry can permeate almost every corner of a local economy. This year, that means its troubles do, too.

The economic impact of conventions and conferences

Under normal circumstances, the meetings industry is a huge contributor to the US economy. In 2017, according to a study by Oxford Economics commissioned by the Events Industry Council, its direct spending totalled $325bn in the US, employed nearly 2.5 million people and contributed $184bn to the US economy.

Globally, business events – be they conventions, conferences, congresses, trade shows or any other kind of corporate event – support nearly 26 million jobs across more than 180 countries. Going from its $621.4bn direct impact to global GDP, the study suggests, the business events sector would rank as the world’s 22nd-largest economy.

Because these corporate events are so decentralised, the impact of the meetings industry is sometimes overlooked. But it’s far more than just the cost of a hotel room for a few nights or the booking of a conference centre. The industry supports jobs at airports, cafes, bars, restaurants and stores – as well as the tourist attractions that many conference-goers visit apart from the events.

That explains why many cities invest heavily in their convention centres, build economic-development plans around them and compete fiercely for the events that fill them up. Even with mass gatherings cancelled for the foreseeable future, some are continuing to invest in their convention centres. County leaders in Orange County, Florida, for example, advanced a $700m loan this year as part of an update to the region’s Pentagon-size centre, despite a growing need for public subsidies for the industry.

Even a single major conference can have an outsize impact on its host city: in Cleveland, the 2016 Republican National Convention provided an opportunity for the city to remarket itself as an up-and-coming convention destination and brought nearly $190m to the local economy. And this year in Chicago, the cancellation of the International Manufacturers Technology Show, which normally hosts 129,000 people, has had an estimated economic loss of nearly $247m.

In San Antonio, 209 citywide meetings have been cancelled due to the pandemic, representing more than $283m in lost economic impact without factoring in meetings that may have been limited to individual hotels. The city is a popular spot for conventions and conferences in the US, with consistently high rankings and more than 280 “meeting hotels,” compared with 177 in Chicago and 196 in Washington, DC. Encouraging people to stay on and contribute even more to the city’s economy is usually an easy sell: the city boasts heritage architecture, reliably good weather and relative inexpensiveness compared with Las Vegas or New York.

Matej’s own workplace exemplifies one slice of the fallout of losing this industry.

“We’re a destination marketing organisation,” she says. “We’re primarily funded by the hotel tax, but people haven’t been staying at hotels, so our budget has been cut.” In turn, the company has had to cut back on many of its contracts, often with local marketing or public-relations firms.

Then, of course, there are the businesses dependent on the foot traffic of conference-goers. “Restaurants, museums, attractions – conventioneers go shopping, conventioneers eat out,” she says. The hotels on the outskirts of town, which accommodate the spillover of non-conference business travellers when a convention fills up more-central ones, have also lost their clientele.

It’s a similar story in popular Canadian destinations. While the coronavirus has been significantly more contained there, the country’s CA$33bn ($25bn) conference industry has been decimated, with the loss of an estimated 3,700 events – and nearly CA$1.31bn in direct spending – as of 31 July, 2020, according to Destination Canada. Demand is likely to be severely reduced for the next year or more, with the focus now on 2022.

Niagara Falls, Canada, and its Scotiabank Convention Centre, is one key destination for tourism and business travel alike, with more than 13 million people a year visiting this town of around 90,000 people. From the start of the pandemic through August, all scheduled events were either cancelled or postponed, says Greg Higginbotham, the centre’s marketing manager.

“Our cancellation numbers are not easily comparable to other Canadian convention centres because of differences in size and location,” he says. “One thing we may end up having in common is that the ripple effect of being closed for four months could carry over into the last quarter of the year and beyond.”

While reopening to international travellers is some way off, since early September the centre has been able to reopen with an allowance of 50 people per room and various health and safety measures that make use of its total event space of 300,000 square feet. Still, Higginbotham says, “recovery for a large building like ours, designed intentionally to host large convention groups, is expected to be gradual as we all transition further into this new reality.”

Convention centres find other uses in 2020

In the US, where the pandemic storms on, various setbacks have seen convention centres forced into new roles. New Orleans’s Convention Center is the sixth-largest in the country and has a critical role within the city to bring in visitors who help support local businesses and restaurants, which have struggled to survive without conference-goers even as leisure travel trickles back in, says Tim Hemphill, the venue’s vice president.

“If you apply that to our business model at the convention centre, we’re supported by the taxes that are generated by people staying in hotel rooms in New Orleans,” he says. “Without them here, our finances are somewhat hampered.”

The event calendar is essentially blank through the end of the year, he says, barring one event in December that’s still “kind of hanging on.” In the past, the convention centre has been tapped to loan the state millions of dollars to help pay for health and education projects; this year, as the city experienced disaster after disaster, it has had to support locals in a different way.

For a matter of months, starting in April, it played host to a medical monitoring station, resembling efforts in Chicago, Washington and other cities to repurpose empty convention centres into medical facilities if hospitals reached capacity. More recently, when Hurricane Laura hit the city, it was deployed as a distribution centre for essential services, with many thousands of people streaming through the doors to receive diapers and other critical goods. 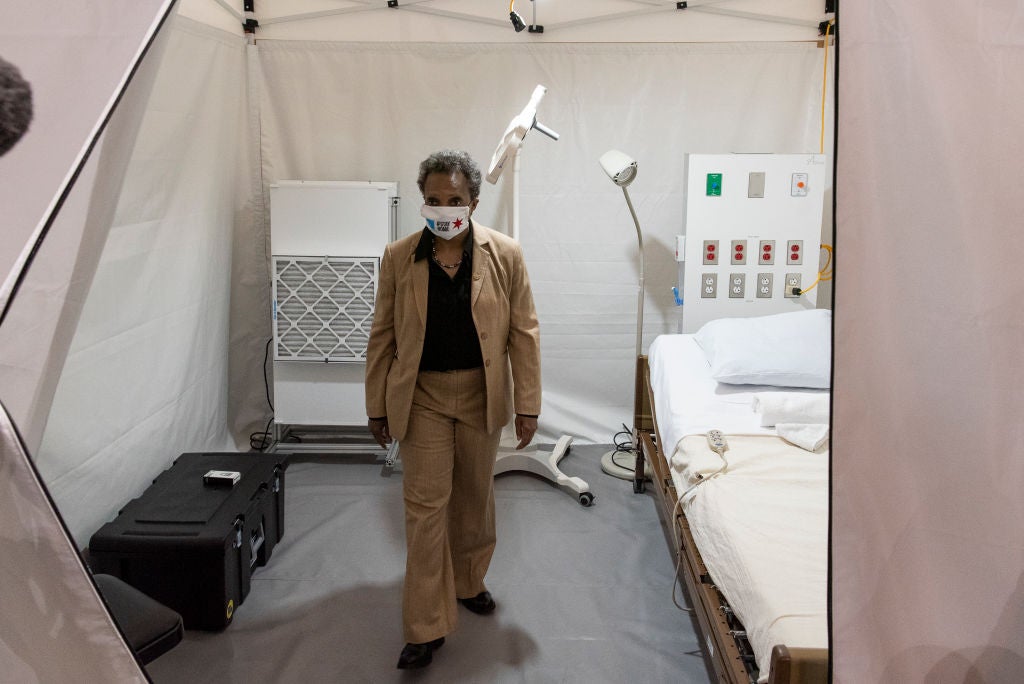 While the convention centre is reimbursed for some of these costs, Hemphill said, it’s a long process that requires working closely with the Federal Emergency Management Agency. “We do get some financial reward for doing that, but it’s not as if it’s as good as having an event in the building,” he says.

In the meantime, the centre has begun working through its new health and safety protocol. “We’ve recalibrated all of our meeting space to account for social distancing,” Hemphill says. “We have an industrial hygienist on retainer, we’ve got protocols in place for temperature checks and disinfecting or sanitising meeting rooms in between stations.” Guests will have infographics at the ready in elevators and around the centre as well as sanitising stations throughout the building. “So we’re ready,” he says.

But even with these safety measures in place, which mirror those in San Antonio, Niagara Falls and countless other cities, it’s not hard to see why some conference-goers might be apprehensive about going back. After all, conferences have historically been tightly packed events, where members jostle together, share buffets and microphones and sit cheek-by-jowl in meeting rooms. You don’t really know where your neighbour has come from or what they’ve been doing, and it’s hard to assure your own safety. A February conference in Edinburgh, for instance, became a superspreader event, where 25 attendees contracted the virus, then brought it home with them, including to a child’s birthday party, where someone else got sick. It’s hard to imagine a safe alternative.

Since the start of the pandemic, digital-only conferences have become the norm. While they work fine for keynote speeches or panel discussions, they’re no substitute for the real thing, particularly when it comes to networking or sideline chats that for many are the reason to go in the first place.

While cities will surely want to see a return to in-person events as soon as possible, hybrid conferences, where some attendees come in person and others attend online, may help bridge the gap and allay the concerns of nervy travellers. For Hemphill, that’s one of the few silver linings of the past few months. “They could expose that event to more people throughout the world,” he says, “which may attract them to become members or attendees in the future.”

Contributing writer to City Monitor.
Websites in our network