The small Scottish town of St Andrews is home to one of the UK’s oldest and most highly regarded universities. The University of St Andrews has grown very rapidly in recent years, witnessing a threefold expansion in student numbers between 2002 and 2017. Today, there are 9,000 full-time students matriculated in a town with a permanent population of 16,800. There is no doubt that St Andrews is undergoing a process of “studentification”.

Studentification occurs when there’s a major influx of students into specific areas of cities, towns and neighbourhoods. At the crux of the phenomenon in the UK is a rise in the number of houses in multiple occupation, or HMO, where three or more unrelated tenants live together in the same residence.

In recent years, this has become a topic of heated debate within local communities across the UK. There are competing views over whether greater numbers of student abodes – particularly off campus – triggers a process of urban renewal or sets in motion a process of deterioration and “urban blight”.

Although studentification can be a good thing, the term is typically used in a negative sense, to denote a neighbourhood in decline. Local councils have sought extra powers to break up so-called “student ghettos” in cities such as Nottingham, Birmingham, Worcester, Durham and Leeds.

So, we decided to investigate the effect it is having in our own town, St Andrews – affectionately known as the “bubble”, owing to its highly insular community.

We found a massive increase in the number of student-occupied HMOs across St Andrews. Over the last five years, the number of HMO licenses granted to private sector landlords has risen by one fifth again. There are now nearly 1,000 HMOs in the town.

In some parts of St Andrews, estimates suggest that students make up between 80 per cent and 85 per cent of the population – especially in the centre, where they prefer to live. But since a partial ban on student dwellings was placed on the town’s central areas in 2011, more and more HMOs have spilled into neighbouring residential areas, causing even greater concern among local residents. 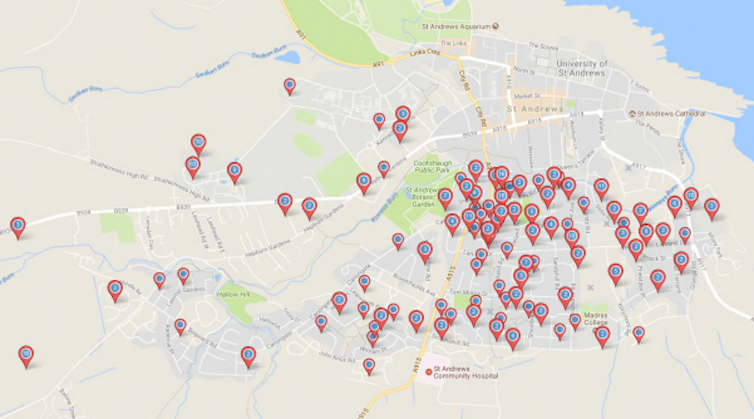 Our study found that creeping studentification is having a significant, and in many cases, negative effect on key residential areas of the town’s housing market. There are fewer owner-occupied properties and fewer opportunities for university staff to live locally.

There are also greater restrictions on affordable housing for local residents: the amount of socially rented accommodation within the town has halved over the last ten years, while the average house price in St Andrews is almost double the Scottish average.

We noted growing tensions between local residents and the university. While the university has benefited the town, it was felt that the university had grown too fast, given the impact it was having on housing. Many locals felt like they have little power to change what’s been happening to their town, meaning that there’s a growing sense of community disempowerment.

The number of local residents being replaced by childless students housed in HMOs has also raised fears that local services such as primary schools could be under long-term threat of closure. Parts of the town are also visibly displaying the “scarring” effects associated with studentification; such as the downgrading of the physical environment, uncollected bins, litter, vandalism and noisy (often drink-related) anti-social behaviour. 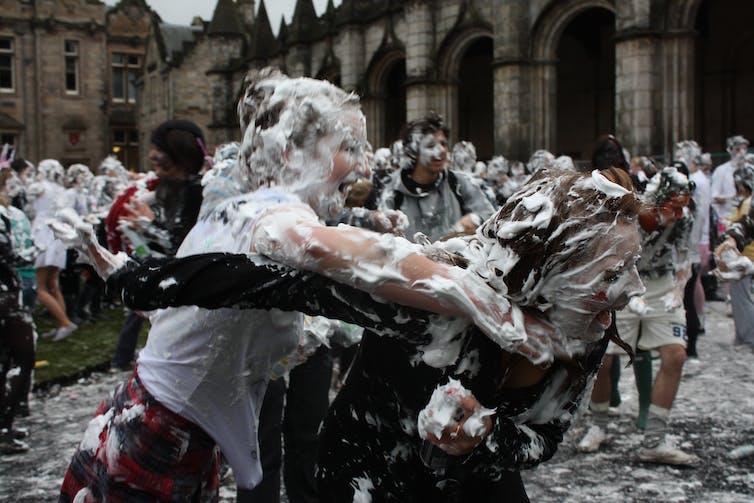 The situation is bad for students, too. They often face extremely high rent, with monthly fees often exceeding £500 to £700 for poorly-maintained properties, owned by absentee landlords or “slumlords”.

Of course, the university brings substantial benefits to the local economy, especially in terms of job creation, supporting some 8,000 full-time equivalent jobs in Fife and Tayside. The institution also brings a degree of cultural dynamism to the town, which it might otherwise lack. Not all students can be tarred with the same “studentification” brush. Indeed, many students interviewed also complained about the anti-social behaviour of their fellow students.

Some resident groups claimed that HMO-led studentification has “hollowed out” the town, and even local councillors said the situation is now “out of hand”. The consternation felt within the local community has reached such heights that there could be calls for action to restrict the growth of student numbers at the university.

It’s encouraging that the university is currently expanding its halls of residence, adding another 1,000 spaces to help alleviate this problem. The representatives we spoke to from the local authority, on the other hand, are relying on the market to resolve matters.

Yet by indiscriminately approving private sector HMO licenses in the town without proper planning, Fife Council has overseen a reduction in affordable housing, inflation in house prices and the degradation of the local environment. A review of current policy is being undertaken by the local authority which will hopefully seek to redress these complex processes and provide longer terms solutions to the housing problem in the town.

The relationships between universities and local authorities – or town and gown – are often fraught, and St Andrews University and Fife Council are no exception. But there are workable solutions. The development of a student housing campus to the west of the town would help ease the pressure on the local housing market. And future issues can be allayed, if the university and local authority work together to develop a long-term plan for housing, which takes into account the growing number of students at the university.

This article is from the CityMetric archive: some formatting and images may not be present.
Topics in this article : Education