Spike Island – the former fortress and prison off the coast of County Cork in Ireland – has been named Europe’s leading tourist attraction at the World Travel Awards. The island beat off competition from Buckingham Palace, the Eiffel Tower and Rome’s Colosseum to win what is described as the “Oscars” of the travel industry. It is a win for the community and also a win for so called “dark tourism”, whereby travellers seek something a tad more macabre than the traditional trip to the seaside.

There is no doubt Spike Island has a fascinating history. Situated in Cork Harbour, one of the largest natural harbours in the world, it has been home to a monastic settlement, a military fortress and a prison. Since the fortress reopened to visitors in June 2016, it has become a popular tourist destination, attracting over 45,000 visitors this year.

Visitors travel by boat from the town of Cobh to the island where they can explore the star-shaped fort which was home to thousands of soldiers and prisoners from the late 18th-century until 2004. There they learn about the history of the island, from its place as a home to early Christian monks, through the key strategic role it played during the French Revolutionary Wars and the Napoleonic Era, to its reincarnation as an island prison in the 19th, 20th and 21st centuries.

The growth of ‘dark tourism’

Spike Island is one of a growing number of attractions in Ireland that can be called “dark tourism” sites. Dark tourism is closely associated with death, suffering and the macabre. The concept is far from new – Madame Tussaud became famous in Paris during the French Revolution when she cast waxwork death masks of the guillotined and by the 1830s she was exhibiting waxworks of murderers in London.

Sites associated with death and suffering have long been commercialised. In my book, Blood Runs Green, I wrote about the public fascination with death, and particularly brutal death, in Gilded Age America. In Chicago in 1889, thousands of “dark tourists” paid a dime to visit the house where a man had been bludgeoned to death and a further dime to take away souvenir shards of blood-stained wood (no one seemed to notice that far more splinters of wood were sold than had been necessary to build the house).

Academic studies of “dark tourism” have tended to focus on sites associated with the holocaust – particularly concentration camps such as Auschwitz. But some research has been conducted on prison islands, notably Robben Island off the coast of Cape Town, South Africa, which was home to Nelson Mandela for 18 of his 27 years in prison. 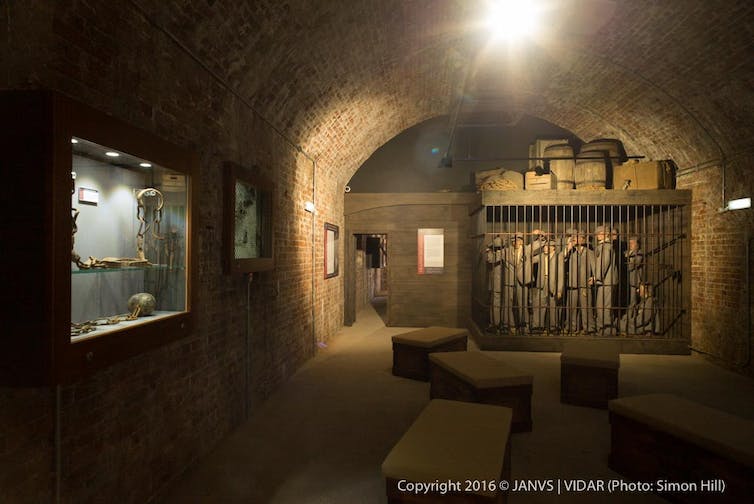 Interior of the old shell store which tells the story of the transportation of prisoners. Image: Simon Hill/author provided.

Other studies looked at Alcatraz, the famous prison island in San Francisco Bay. Both sites have key dominant stories – the image of Alcatraz is dominated by Hollywood visions of the island prison, while Robben Island is most closely associated with the political prisoners of the apartheid regime. Both sites make efforts to expand the visitor experience beyond these narrow histories, but with limited success in the public perception.

Part of my role as the historical advisor for the Spike Island Project was to consider issues associated with representing incarceration, punishment and execution. History should be neither sanitised nor sensationalised. Dark tourist sites are often tempted to provide the gory details of executions, highlight escape attempts and focus on the brutality of jailers. But it is also important to consider the victims of crime and the ways in which their experience might be marginalised when sites focus on the sensational.

Our project identified four key narratives that would allow the social, political and military histories of the island to be told: Cork Harbour, the Island Fortress, the Island Prison and the Island Home. Our intention was not to privilege one theme or story, but to offer visitors a multi-layered experience that revealed a diversity of voices ranging right across the island’s past.

Tourism is a business and commercial realities are a factor in developing any tourist site. Sites need to make money and it is the responsibility of the design team to make the content as accessible and as interesting as possible. Unlike Alcatraz, Spike Island had few famous prisoners and has not been immortalised in Hollywood films. As the historian responsible for researching and writing the island’s story, this was a good thing, as it enabled me to tell the whole story of the island as a place of refuge, defence and of incarceration.

Visitors can wander through the remains of the island village and imagine growing up on an island complete with its own school, church, fortress and prison. They can walk the corridors of the prison and stand in the cold, damp cells. They can patrol the perimeter of the fortress and imagine defending Cork harbour from a flotilla of invading ships. These are the types of experiences that cannot be replicated in a purpose-built museum.

The challenge of telling complex and diverse stories in a compelling and attractive way is a considerable one and involves input from a lot of people. But I believe that Spike Island successfully treads the fine line between education, entertainment and sensation. It is neither exploitative nor does it shy away from its difficult past.

This article is from the CityMetric archive: some formatting and images may not be present.
Topics in this article : History , Tourism