Kuwait has a long history of overseas investment. Formed in 1953, the Kuwait Investment Authority is the oldest sovereign wealth fund in the world and one of the largest, with nearly $600bn in assets under management. Each year 10% of government revenues are put in the Future Generation Fund it manages.

By contrast, inward investment to Kuwait is miniscule. The country attracts the lowest inbound foreign direct investment (FDI) of any country in the Gulf Cooperative Council (GCC) and ranks lower than any other country in the region in the World Bank’s Doing Business 2020 report. 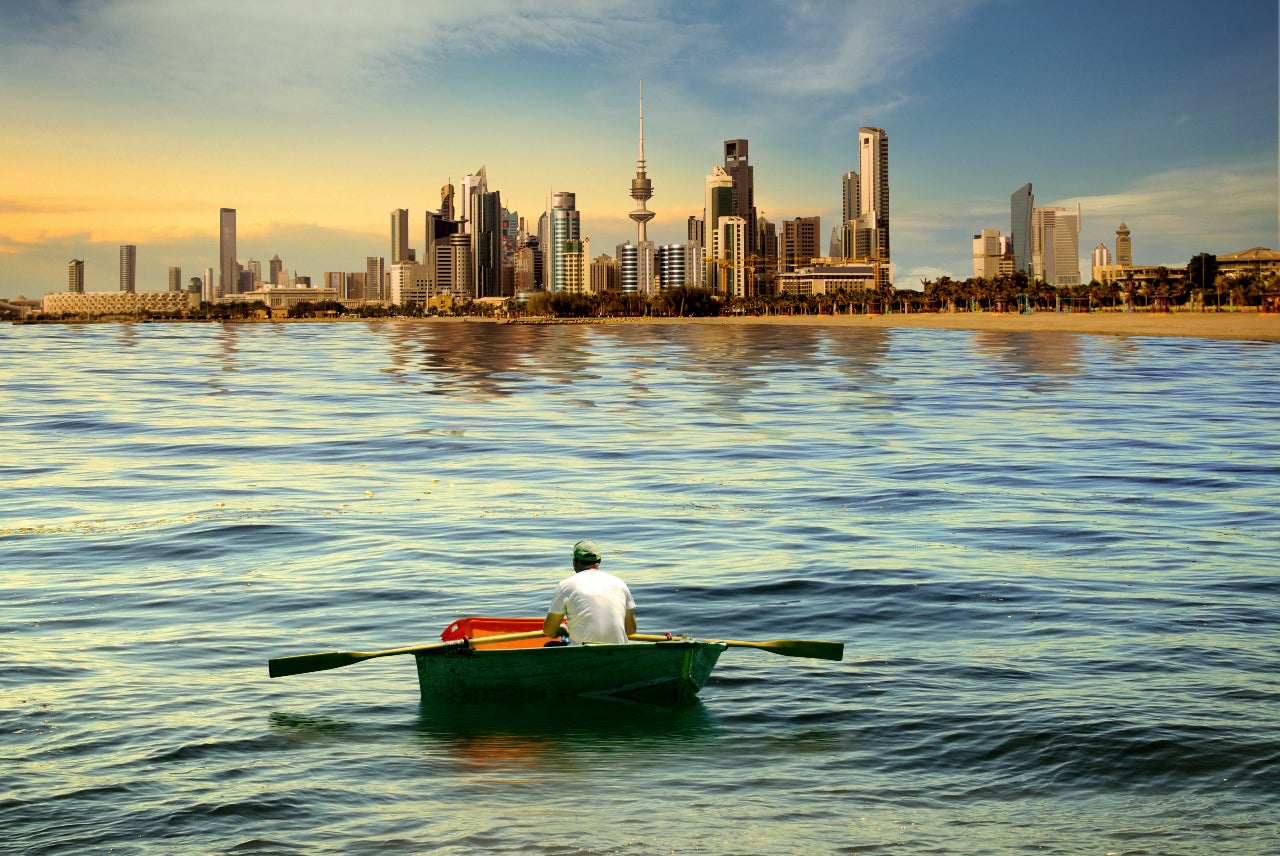 A man rowing a boat on the waters off Kuwait City during sunset. (Photo by Arlo Magicman/Shutterstock)

Kuwait City is not seen as a regional business hub in the same way as Dubai, Abu Dhabi, Bahrain or even Riyadh, yet it faces similar challenges of providing good infrastructure and good jobs to a growing population. Nearly three-quarters of Kuwait’s 4.2 million citizens live in the Kuwait City metropolitan area.

Covid-19 and associated depressed oil prices are putting pressure on the country’s state budget, and if its targets to diversify its economy away from a dependence on oil are to be achieved it will require increased support from private companies.

Kuwaiti public debt declined by roughly 3% between 2018 and 2019, at which point it made up just 11.77% of GDP. The pandemic reversed this improving trend. The budget bill approved by Kuwait’s caretaker cabinet in January 2021 predicted a budget deficit of roughly $40bn for the following fiscal year.

The government of Kuwait has stated its ambitions to vastly increase its inward FDI, but what role will Kuwait City play in achieving that goal?

Kuwait’s economy is heavily dependent on its oil and gas industry, which it plans to significantly grow over the next two decades.

Like other GCC states, Kuwait has created a ‘vision’ document to outline its plans to diversify its economy away from oil dependence and rebalance its labour market towards the private sector. Vision 2035 aims to “transform Kuwait into a financial and trade hub, attractive to investors, where the private sector leads the economy.”

FDI is named as one of the pillars of this proposed “new Kuwait”, with a target of attracting 300% more FDI and raising $133bn (Kd400m). However, total inward FDI stagnated in the years leading up to the outbreak of the Covid-19 pandemic, and FDI as a percentage of GDP was lower in 2018 and 2019 than it had been in the three previous years.

In 2019, Kuwait clocked up just 695 announced greenfield investment projects, whereas Bahrain, another regional petrostate with a population of just 1.6 million, attracted 1,051 projects.

According to the Kuwait Direct Investment Promotion Agency (KDIPA), the pipeline of investment projects in the country is valued at $200bn and is spread across construction; power and water; transport; energy; industrial and chemical; information and communications technology (ICT); biodiversity; and pharmaceuticals.

The business environment in Kuwait City

“Kuwait enjoys many attributes that make it a promising investment location for investors, such as high income per capita, prudent monetary policy and a sound banking system, a robust stock market and a highly educated youth,” says a KDIPA spokesperson.

While Kuwait is a wealthy country and boasts the only parliamentary democracy in the GCC, Kuwait City has not attracted corporate expansion projects in the same way as other regional capitals.

One of the most noteworthy office openings in Kuwait City in recent years was that of British oil services company Petrofac in late 2019, a company with a long-standing presence in the country. Examples of major companies outside the oil and gas industry establishing a presence in Kuwait City for the first time are rare.

Democracy has not proved a significant lure for foreign companies given how unstable and slow-moving the country’s parliamentary system is, and there are other barriers to doing business in the city.

Sophie Olver-Ellis of the London School of Economics said in a report on Vision 2035 published in 2020: “Although Kuwait has sought to reduce protectionist policies and open up to the global economy, it is evident that the ‘national champions’ who comprise the merchant elite continue to dominate the private sector and will block competition and policy reform that are seen to threaten their social, political and economic activities.”

KDIPA was established in its current form in 2013 as part of a revision to the country’s FDI laws. A foreign investment licence from KDIPA allows companies to be 100% foreign-owned in specific sectors and provides them with certain tax incentives and exemptions from customs duties.

The industrial sector has seen growth in recent years but employment levels in the services sector, which is the fastest-growing part of economies such as Dubai, has remained largely flat over the past two decades.

The more eye-catching schemes set out in Vision 2035 are large physical infrastructure developments such as the Northern Gulf Gateway, which will connect Kuwait City to northern region of the country through commercial, tourist and logistics projects.

Kuwait is considered a naturally profound hub for advanced ICT technology and is blessed with innovative, technologically savvy youth who comprise more than 60% of its population. KDIPA spokesperson

Kuwait City does not have the same tourism infrastructure as somewhere like Dubai, nor the tourism aspirations of Saudi Arabia. Being one of the hottest cities in the world, with temperatures exceeding 50°C in summer, may put off many visitors, but the government is seeking to enhance leisure and transport services in and around the city.

Kuwait Authority for Partnership Projects (KAPP) is the government entity responsible for procuring infrastructure public-private partnerships. Although completed projects to date have been limited to the power and water sector, proposed developments include a 511km rail network connecting Kuwait City to Kuwait International Airport, seaports and to other GCC countries, and a new services and entertainment centre in Al Ahmadi.

The KDIPA spokesperson says: “Kuwait is considered a naturally profound hub for advanced ICT technology and is blessed with innovative, technologically savvy youth who comprise more than 60% of its population.” According to KDIPA, ICT services comprised more than 40% of its approved FDI projects between January 2015 and March 2020.

If ICT investment can be increased, and the long-delayed infrastructure plans of KAPP finally realised, Kuwait City would be in a position to compete with other major cities in the GCC when it comes to appearing on the radars of foreign investors.