The culturally conservative and petroleum-heavy Middle East is not famed for championing women’s rights or carbon-reduction policies.

So a landmark sustainability-linked loan – taken out by Dubai-based Majid Al Futtaim (MAF) – that seeks to do both was always going to stand out. It does so both because of the deal’s key performance indicator (KPI) targets and because the KPIs impose a penalty if they are missed but provide no reward if they are hit. 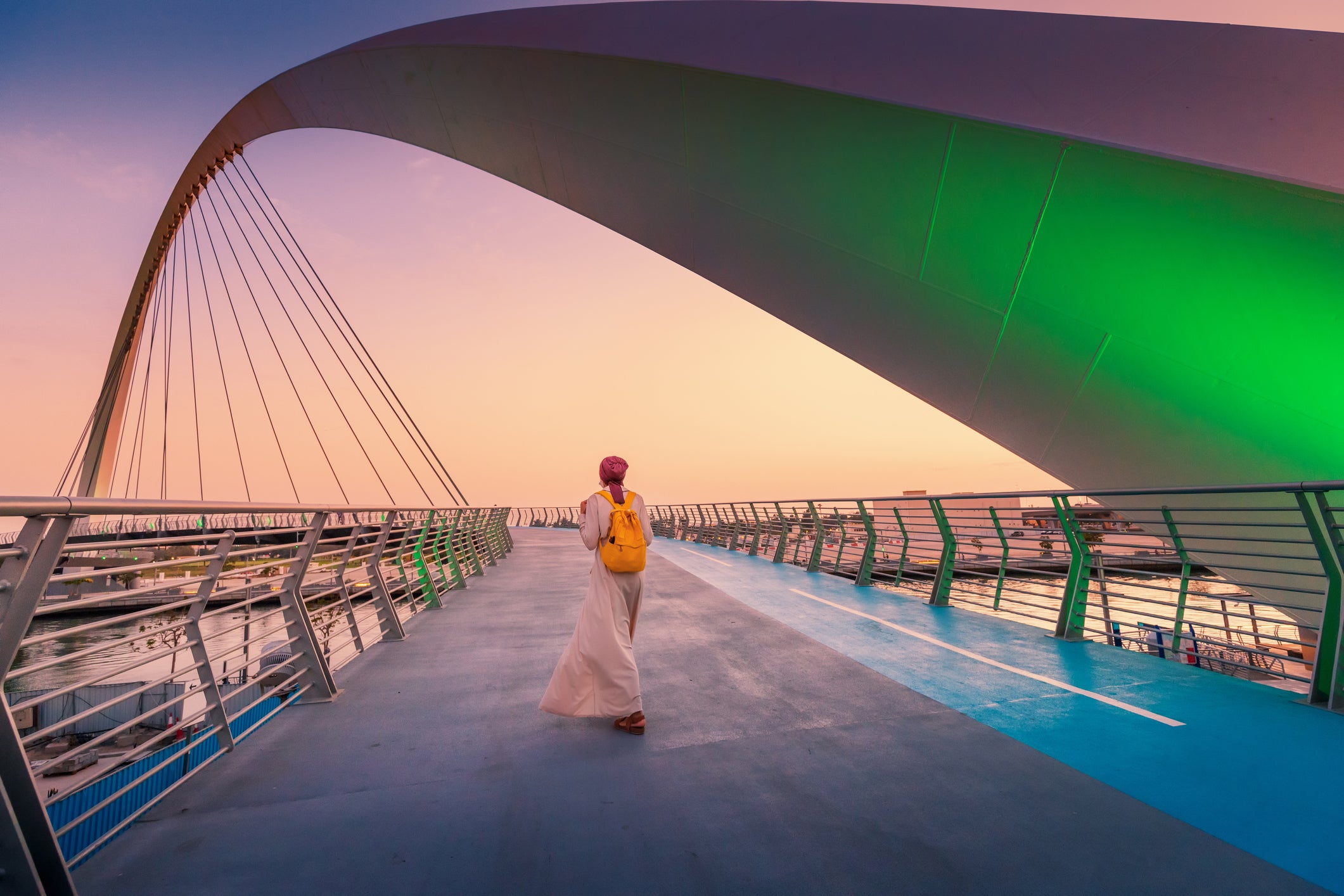 Woman tourist walks on the tolerance suspension bridge in Dubai. (Photo by frantic00/iStock)

The real estate and retail conglomerate has long set and surpassed green targets. It is an outlier and leader in the region in that respect.

MAF was the first Middle Eastern company, in April 2017, to adopt a net positive sustainability strategy by 2040. It was also the first issuer from the Gulf to sell a green ‘sukuk‘ – an Islamic financial certificate similar to a bond but which complies with sharia law – in May 2019. A second green sukuk followed in October of that year.

Moreover, in March this year, MAF became the first group in the world to be awarded the Leadership in Energy and Environmental Design (LEED) Platinum certification for its 13-hotel property portfolio.

And on 26 August, MAF – which reported Dh32.6bn ($8.9bn) of revenues last year and is the highest-rated privately owned corporate entity in the Gulf Cooperation Council (BBB from Fitch and S&P) – agreed a $1.5bn five-year sustainability-linked loan, its first issuance of this type. Structured as a revolving credit facility, the deal is the largest corporate sustainability-linked loan in the United Arab Emirates and reflects a growing appetite for the tool across the globe.

The loan has three KPIs: a reduction in carbon emissions, LEED certification for its malls and a gender diversity target. The latter was the toughest of the three to get approved internally, John Arentz, MAF’s head of treasury, says. It is, after all, the first time such a KPI has been set in the region, he says.

The goal is for women to account for 30% of the company’s board and senior management within five years, up from 14% currently and 12.5% last year. It aligns with the aims of the 30% Club, a London-based diversity advocacy group.

“There is a national push for [improved gender diversity in business],” Arentz says. “And we’re the first [company in the region] to put it out there and say that we’re going to try and achieve this over the next five years.”

Women’s participation in the labour force in the Middle East remains the lowest in the world, according to McKinsey data from March last year. At 24.6%, it is half the global average, despite high rates of enrolment and education literacy levels.

Yet things are changing for the better, in Dubai at least. There have been several directives on the subject from both local exchange the Dubai Financial Market and the government, of which 30% of the ministers are now female.

If we have a man and a woman equally qualified for a job, we should be picking the woman. John Arentz, MAF

MAF’s strategy reflects the direction of travel. But while it still has a long way to go, it would be reluctant to impose quotas. “I don’t necessarily think that we need to go down that route,” says Arentz, though he is in favour of positive discrimination: “If we have a man and a woman equally qualified for a job, we should be picking the woman.

“We also need to look at the roles we’ve got and ask how to make sure that [women] have the right opportunities to progress.”

Arentz says that there is an economic benefit to getting this right, citing the volume of research indicating that companies operate more effectively the closer they get to gender parity. An influential McKinsey Global Institute report from 2015 suggests that $12trn could be added to global GDP by 2025 by advancing female equality.

Dubai’s Mall of the Emirates, one of Majid Al Futtaim’s 29 shopping malls across the Middle East, Africa and Asia. (Photo courtesy of Majidal Al Futtaim)

The other KPIs within the sustainability-linked loan include a 40% reduction in carbon emissions over the next five years. That target is tied into a commitment that the company has already made to become “climate positive” in carbon and water by 2040, Arentz says.

Last year, MAF cut its emissions by 9.2% (see chart below), but that reduction was at least partly down to closures and operating cutbacks because of the pandemic.

The company expects its renewable energy sources – which are due to become fully operational this year ­– to help it hit its KPI targets. Last year, 63% of the energy used by its malls was generated from renewable sources.

For the final KPI of the sustainability-linked loan, and as a follow-on to its LEED certification for its hotels, MAF aims to ensure that all of its 29 shopping malls across the Middle East, Africa and Asia have at least the Gold LEED certification. Arentz says 18 are already there, and work has already started on the remaining 11.

The work begun with the proceeds of the first two sukuks will also contribute to the KPIs.

Sustainability-linked loan: Stick, but no carrot

The financing is “a logical next step” for MAF, says Oliver Phillips, Dubai-based associate director of sustainable finance at Standard Chartered, which was the deal’s sole sustainability coordinator.

Many large corporations in Europe have integrated an sustainability-linked loan structure into their core revolving credit facilities. Most of them are structured so that the borrower pays a lower interest rate if it hits all of its KPIs and a higher one if it misses them. But MAF’s is slightly different: it is “penalty only” – there is no carrot, only a stick.

MAF's sustainability-linked loan is the first in the Middle East to have a penalty-only structure. Oliver Phillips, Standard Chartered

“The reality is that, from a pure impact point of view, this is how these things should be structured,” says Phillips, adding that this was the first example of such a structure in the Middle East.

“It should not be a concern for us that we might have to pay a penalty,” says Arentz. “But I thought it made a lot more sense to say 'let’s get the right base rate'.”

He declines to reveal the interest rate MAF is paying on the sustainability-linked loan, but says it is around five basis points lower than would have been charged on a conventional loan. That is effectively the penalty if it failed to hit all its KPIs, he adds.

Further sustainable or green issuance is likely from MAF. It has another couple of syndicate revolving facilities that will come up for renewal over the next couple of years.

“We’re generally fairly agnostic with regard to the sukuk market, the bond market and the currency market,” says Arentz. It comes down to which is the most suitable for the financing required at the time.

Topics in this article: Inequality