Throughout the late 20th and early 21st centuries, China was the most rapidly urbanising country in the world. As a reporter for BusinessWeek and then Bloomberg, Dexter Roberts got to report on this epic story, and this year, drawing on his experiences, he published a book called The Myth of Chinese Capitalism. 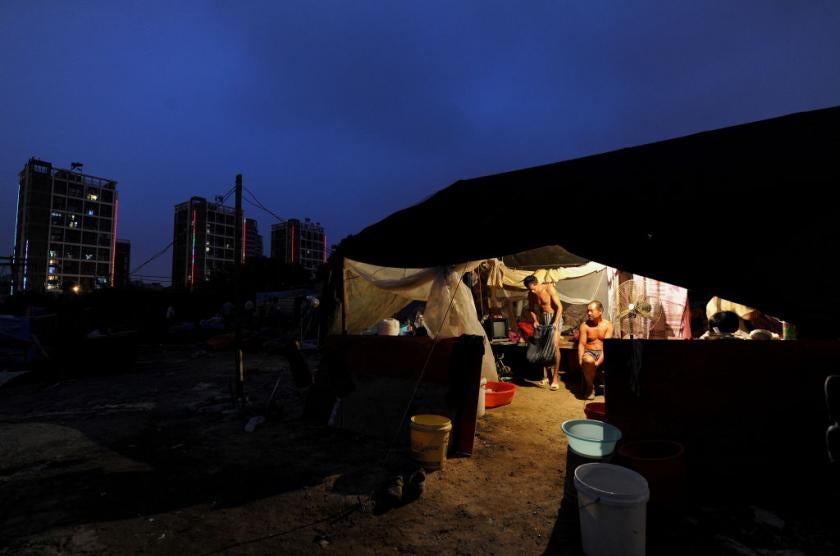 China’s household registration policy ensured that rural migrant workers could never fully integrate themselves into the cities. (Photo by STR/AFP via Getty Images)

As one of the longest-serving English-language correspondents in China, he reported from 1995 to 2018 and saw the country’s economy grow to be the second-largest in the world. Along the way, he covered everything from the emergent tech sector to labour strife in the factory towns of the Yangtze and Pearl River deltas. Within China’s spectacular rise, Roberts also reported on inequalities baked into the Communist Party’s carefully managed system that could hinder the nation’s continued growth.

Written before the Covid-19 pandemic, Roberts centers his narrative on the divide between the rural population and the nation’s wealthier urbanites, which he argues is one of the principal issues holding China back. City Monitor spoke with him about segregation in Chinese urban centers and what Western political leaders got so wrong about China’s rise.

In your book, you argue that the divide between China’s rural and urban populations is one of the central challenges facing the country and its economic model.  But a lot of nations have rural-urban divides. Why do you think that China’s is so destabilising?

When I moved to China in January 1995, people were making about three times as much in the cities as those registered in rural areas. Today, that number is roughly the same. There was a clear government priority trying to narrow the gap back then, and there still is today. But we’ve seen very little progress. The country has gotten much wealthier, and living standards have gone up for everyone, but that stubborn gap is still there.

The other big issue that makes China unique is its internal passport system, the household registration, or hukou, system. Back then, it ensured that people born in the countryside were not free to migrate to the cities. Today, they can migrate, but in most cases, they can’t access social-welfare benefits – healthcare or education or pensions – in the cities even when they live there. They have to pay for private clinics in the cities or travel all the way back to the countryside for healthcare.

So, yes, there are urban-rural wealth gaps all around the world. But China is notable by how large it is and by this policy that underpins it.

Why has household registration, a holdover from the Mao era, become so embedded in Chinese society?

The household registration policy became a pillar of the post-Mao economic model, which made China a factory to the world. At its most basic, it became a mechanism that would ensure China continued to have very low wages. It did that by ensuring that these migrants could never fully integrate themselves into the cities, putting them in a very poor bargaining position when it came to demanding wage rises and better working conditions.

But if you look at where a good portion of the resistance to reform is coming from, a lot of it is from relatively privileged people with urban household registration. They have grown up in a system that ensures that half the population doesn’t have access to their city schools or medical facilities. We’ve actually seen protests in cities by urbanites against well-meaning efforts by the central government to try to better integrate the migrants into the cities.

Most commonly, it’s been related to education. You’ve seen urbanites protest outside the local education bureau when the government announces they’re going to allow more migrant children into the local schools. It’s already genuinely difficult to get your kid into one of the better schools in a city, even if you’re lucky enough to have an urban household registration. The last thing they want to see is competition from migrants.

Then the way the system works in China, local governments are responsible for most social-welfare costs, not the central government. They are the ones that would have to pay any cost of bringing migrant kids into the schools and expanding the capabilities of health facilities. There is a perception amongst some local officials in China that the cost of integrating migrants into cities would be exorbitant. There’s a real bias against rural migrants.

What does this say about the theories from various Western thinkers and leaders, including Bill Clinton, that as China became wealthier, the middle class would grow and demand political change?

They were wrong. The reality is that in general, as people become wealthier and better educated in China, they’re less likely to push back against the system, certainly in a forceful way like with protests.

There’s this implicit bargain which, until today, has served the government in urban China well, which is this idea that as long as they guarantee ever-higher living standards, the people of China will not demand civil rights. You will not demand the right to organise, to push back against the policies you don’t like, or the corruption you see in the party. That bargain was already fraying for those that don’t have urban hukou. Now the big question going forward, with the economic downturn in China, is how that bargain will change for people in the cities. But so far, urbanites have not been the source of pushing for more political freedoms in China.

You argue that Western policymakers and intellectuals also miscalculated how big the Chinese middle class would become.

That’s another big myth, that the middle class in China will just continue to grow larger and larger. To be clear, it’s already very big, but it will no longer continue to grow as long as China maintains these legacy policies that ensure half the population is held back and kept in this second-class status.

China for years has been trying to grow the proportion of its economy driven by household consumption. They are trying to move away from this reliance on an export-oriented economy, which is now under threat from both the trade war with the US and from Covid-19. But China today really struggles to increase household consumption. That is because almost half the population are stuck and do not have the spending power or the confidence to spend like people in the cities. The dilemma for the Chinese government is that in order to make a successful economic transition, they need the middle class to keep growing. But they’re not taking the steps to make that happen.

I’m not predicting the collapse of China. What I am predicting is that the economy has problems that are not being dealt with and which will ensure that the growth we’ve seen over the last couple of decades, and that the world has gotten used to, will not continue.

Also, the idea that they are sailing happily through Covid-19 unscathed is completely wrong. If you look at their economy, there are huge challenges right now. Much of the narrative of them coming back to life and sailing through this crisis is based on only looking at the cities. If you look at the countryside, you see a very different picture –  you see large numbers of migrant workers that are unable to return to their jobs, that are still stranded, that no longer have income.

You also have a bunch of the service economy still shut down in China, which has become an increasingly important source of employment for the migrant workers – even more important than manufacturing and construction. Then you’ve got the fact that China, despite some progress in trying to become a more self-reliant economy, is still very reliant on exports to the rest of the world. They will be hit harder later this year by the global economic downturn.

Throughout the world, groups that are already discriminated against are becoming scapegoats during the pandemic. Is that happening in Chinese cities to people with rural household registrations?

They’ve always been scapegoats. They get blamed for pollution, which is absurd. They’re blamed for crime, for congestion in the cities. But there’s even more backlash now. Many migrants, because of an accident of fate, were taking vacation for the Lunar New Year when Covid-19 hit China. They were out of the cities, and when they wanted to come back, when things started to get a little better, they met resistance.

Right now, with Covid-19, there are two potential paths forward. One is positive. The government in China has long known that it needs to make a transition toward relying more on the spending power of its own people and less on the global economy. The trade war made it more obvious. Covid-19 makes it painfully obvious. They need to end these legacy policies that ensure this permanent underclass and change the system so that migrants and rural people can actually see their incomes grow more strongly.

The flip side is discrimination. The track record when the Chinese government says it is going to reform these policies is very poor. They’ve been talking about it for many, many years. In 2013, there was a huge announcement about how they were going to do away with household registration and the dual land policy.

The progress has been extremely limited since then, there have been little, piecemeal pilot programmes in cities around the country, often allowing migrants to settle in places they don’t want to go, where the economies are not doing very well and there are no jobs. The track record is not good. And the early signs from Covid-19 are that the discrimination against them, certainly amongst urbanites, is only growing.