Almost all governments in the world joined the Paris agreement in 2015 in an effort to tackle climate change. In the same year, many of the same governments paid about $400bn in direct and indirect subsidies to help people buy fossil fuels.

Subsidies are government policies which make energy cheaper than under normal market conditions. They mostly go towards fossil fuels, since most of the energy we use comes from oil, gas or coal. As one of us noted in a review published in the journal Ecological Economics, fossil fuel subsidies are a popular and pervasive tool for helping people across the world have access to energy.

But it isn’t clear whether both trends are possible. Isn’t there a contradiction between subsidising fossil fuels and meeting Paris climate targets? And, if the subsidies are removed, won’t many people suffer without cheap energy?

Though recent analysis shows that the worldwide removal would not magically solve climate change, there are many reasons for reform beyond reducing emissions.

There is increasing disillusionment with subsidies. As one senior OECD official puts it:

Subsidies often introduce economic, environmental, and social distortions with unintended consequences. They are expensive for governments and may not achieve their objectives while also inducing harmful environmental and social outcomes.

Therefore, there is growing political momentum against fossil fuel subsidies. In 2016, the G20 leaders reaffirmed an earlier pledge to phase them out.

In theory, reforming or even completely removing these subsidies should not be a particularly difficult task because there is increasing evidence that they are not especially effective at poverty alleviation: the very reason they were introduced in the first place.

For example, an IMF study documented that across 20 developing countries the poorest fifth of the population received on average just 7 per cent of the overall subsidy benefit, whereas the richest fifth received almost 43 per cent. Another study looked at India and found that, of the $22.5bn spent on fossil fuel subsidies in 2010, less than $2bn benefited the poorest 20 per cent. This is essentially because poorer households in poor countries use less fuel than wealthier households, even when energy is subsidised.

Subsidies can also paradoxically lead to energy shortages. In Myanmar, fixed prices for electricity, diesel and petrol have resulted in shortages when those prices fall below international market levels. This has convinced suppliers to focus on exports to China and Thailand rather than domestic use, and has stripped them of the revenues needed for infrastructure.

Why does such an obviously inefficient policy stay around? One easy explanation may be that the main obstacle to subsidy reform is the fossil fuel lobbies. But recent research shows that the situation is not so simple.

Most subsidies were introduced to serve a social mission and some have done it really well. Examples include the US’s Low Income Home Energy Assistance Program or the UK’s Warm Front Program, which helped 2.3m “fuel poor” homes.

In developing countries, subsidies are also typically introduced as well-meaning policies to support lower income groups and thus gain support from large numbers of people. And, although they are an extremely inefficient policy to support development, subsidies are sometimes the best option when institutions are under-developed.

Around the world, almost all subsidies are aimed at consumers rather than producers. It’s true that the bulk of this money goes to richer households, but since energy makes up a larger share of poorer household budgets, subsidies are relatively more important for people on low incomes. Many governments therefore fear that removing them risks political upheaval. 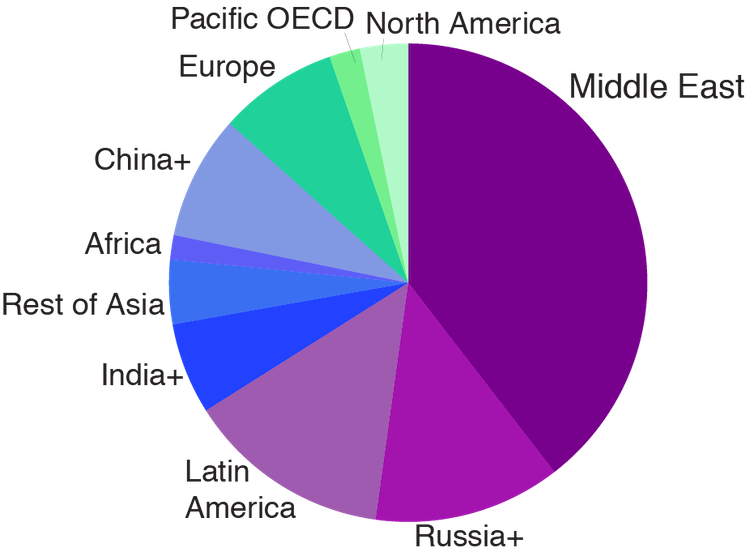 Despite this difficulty, the tension between providing energy subsidies to the poor and protecting the climate is not as insurmountable as it may seem. A recent article in Nature led by one of us shows that, if fossil fuel subsidies were removed worldwide, the largest emissions reductions would occur in oil and gas exporting regions: Russia and some of its neighbours, the Middle East, North Africa and Latin America.

Most subsidies originate in these regions, but they also benefit fewer people living below the poverty line than in lower income countries such as India. This presents a unique political opportunity, because it is these oil and gas exporting countries where subsidy cuts would be most welcomed, as government budgets are squeezed by low oil prices. 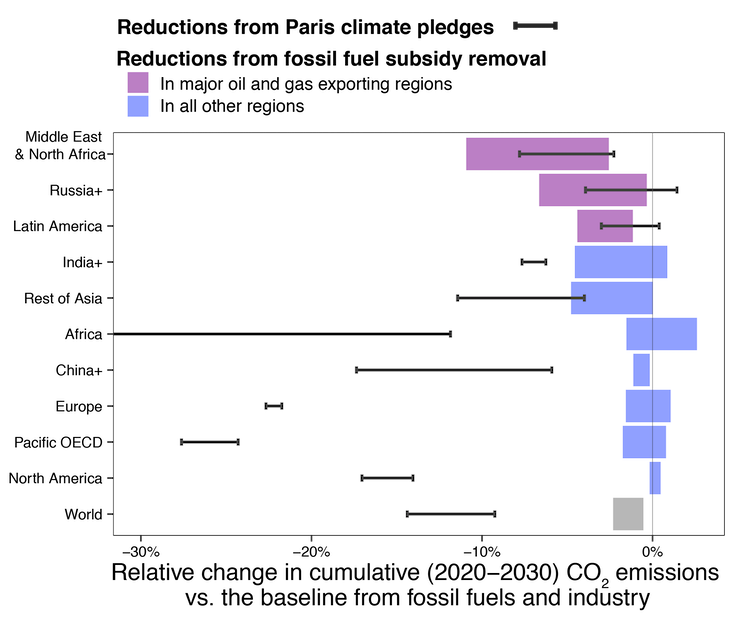 The trick to making subsidy reforms stick, even in the face of an oil price rise, is to combine them with effective pro-poor policies. Examples include India paying for cooking gas for those households which fall below a certain income level, or the way Indonesia and Iran have reallocated energy subsidy money to help finance infrastructure development and universal health care respectively.

Ultimately, subsidy reform is not impossible, but neither is it easy. To gain maximum benefits for the climate while doing the minimum harm to the poor, reforms must be carefully targeted at the regions and sectors where they will be most effective.