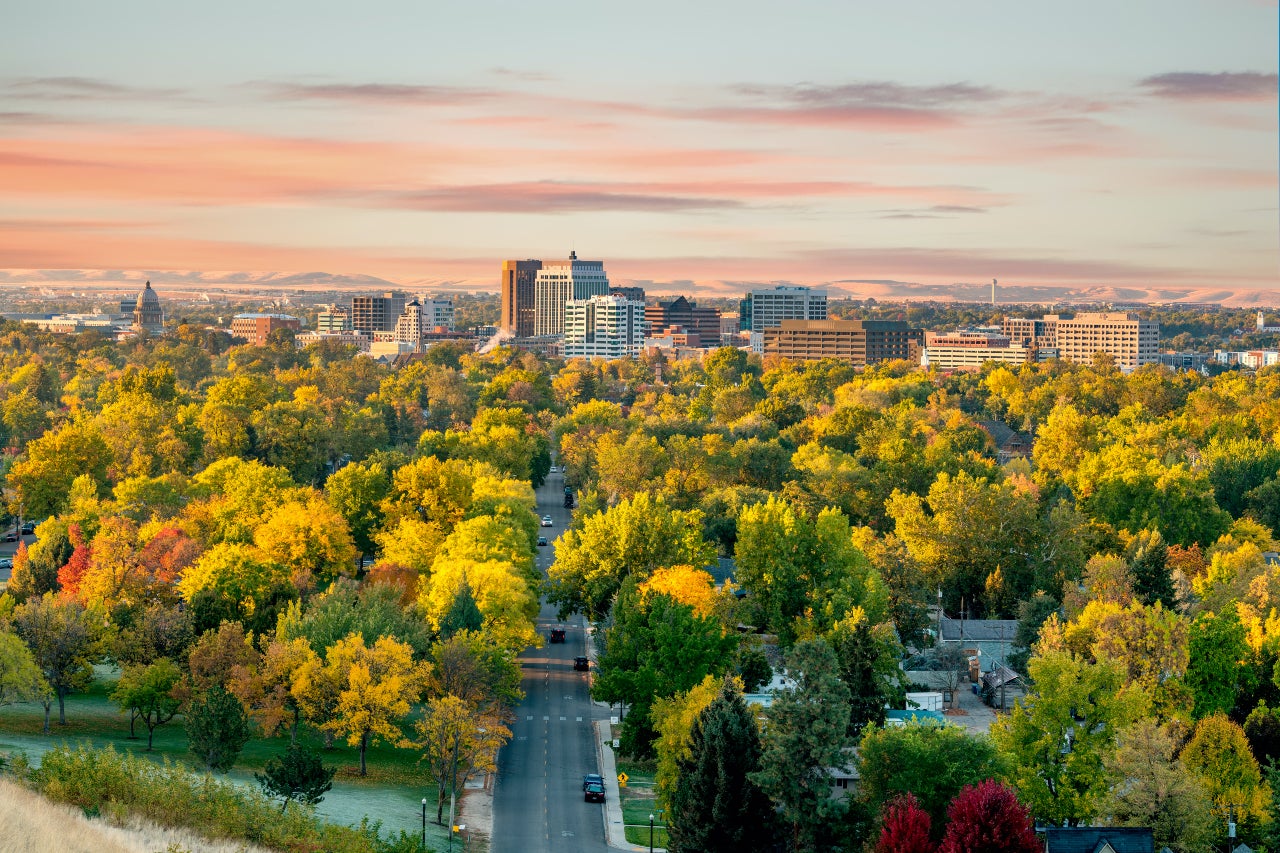 The year 2020 was one of growth for the luxury real estate market in the US, with many cities seeing large shifts in the trends of the past decade, amid changing priorities. What have hitherto been thought of as “vacation” property markets found themselves booming, as buyers sought out space, comfort and access to nature, and prioritised wellness and family.

Our global analysis of Knight Frank data found that while prime real estate markets in developing economies struggled during 2020, many markets in wealthier countries saw growth because of Covid-19, with the US seeing some of the strongest price rises.

To look in more depth at the way the pandemic has impacted the US luxury property market, the Elite Traveler Data Team analysed more than 15,000 data points collated by Zillow, which looks at the prime property market – the top 5% by price – in the largest 100 cities in the US.

From January to December 2020, average prime property prices went up in all 100 cities, with an average 4.77% price growth nationwide. Of the ten cities that saw the largest growth, eight are in western states such as Utah, Arizona and New Mexico.

The smallest growth was seen in New York City, New Orleans and Little Rock, Arkansas. The greatest growth was in Boise City, Idaho, which saw prices rocket by 15.9% up to an average price of just over $1m. Spokane, Washington (10.7%), and Austin, Texas (10.1%), saw the next biggest increases respectively.

Kevin Sneddon, founder of the Private Client Network at Compass, says that demand for luxury properties has “grown exponentially” in what he calls “the great real estate shuffle” of Covid-19.

“As everyone wants more out of a home – and more out of living – everyone seems to be in some sort of a living transition,” he says. “Working remotely has given people a new level of freedom to live and work wherever they like and they have taken full advantage of this opportunity.”

By indexing typical home values to January 2020, we can see the way different markets grew at various points through the past year. While Californian cities were seeing fast growth in the early months of the year, prices dipped in May and June and then grew slowly in the latter half of the year. Mountain West cities saw strong growth throughout the year, which only accelerated from September.

Scott Durkin, president and COO of Douglas Elliman, says that despite agents being limited in showing property until the end of June, the latter half of the year was strong and has remained so into 2021. Prices have increased across most luxury markets in the US. This is not only because people are looking for larger properties with more amenities, but that many are not selling their current homes, so inventory is shrinking.

“People wanted to keep their homes in the city, but invest in a larger ‘safe haven’ home in the country or by the beach to use when needed,” says Durkin, with markets such as the Hamptons seeing huge activity.

The flexibility of remote working and schooling means that holiday locations are now being considered as co-primary residences, so buyers want properties that are big enough, and have the amenities required for longer-term living.

“Now people are not as geographically restricted by their businesses, so have the ability to have more to just fully live where you want to live, as opposed to that being just your vacation spot,” says Brady.

This trend has led to mountain resort markets such as Colorado, Wyoming, Idaho and Montana seeing brisk business over the past year, Brady says. Prices are up and days-on-market down as people seek out wide open spaces, access to nature and clean air.

Analysis of Concierge Auctions’ top 10 sales across US luxury markets, found that Aspen, Colorado, had a price increase of 48%, and Vail, Colorado, 33%. Brady says even the most remote markets have seen strong performance – prices have increased by more than 25% in Telluride, Colorado.

“Telluride is a tiny mountain town and very difficult to get to, and that type of remote location in the past has not been as desirable,” Brady says. “Now that actually is more desirable, because people feel that extra seclusion there.”

Tye Stockton, a Compass real estate broker in Vail, Colorado, speaks of a “pandemic goldrush”, with demand remaining strong even as inventories shrink. He expects demand to continue to outpace supply for another year or more.

In particular, he says, the market is seeing demand for large homes for families, either moving to Vail semi-permanently or acquiring a secondary “safe-haven” in the open spaces of the Mountain West. Stockton says the shift could even be a permanent one, with schools oversubscribed as families settle down for the long haul.

“Many families have realised you can live, play and work here and not sacrifice your ability to run a business,” he says.

Heading for the suburbs

Even those who chose not to move so far have looked for more space, seclusion and cleaner air, resulting in a boom in big-city suburbs or smaller surrounding cities.

California in particular has seen interesting shifts after a decade of huge growth concentrated in San Jose, Los Angeles and San Francisco. Prime property in California’s five largest cities have averaged 45% growth since 2008, and San Jose 78% – both well above the US average of 21% growth over the period.

In 2020 California still saw significant growth, with only San Francisco seeing prime realty growth below the national average, and San Diego seeing 8.9% growth. But, Brady says, there are a lot of shifting priorities, and California luxury properties have seen an increase in the number of days they take to sell. Across its California luxury markets, Concierge Auctions found that its most expensive properties were on market for an average of 151 more days than in 2019, an increase of 59%. Many Californian-based businesses have been relocating to Texas, with Austin fuelling a reputation as “the new Silicon Valley”, while Florida has also seen an influx from California and New York.

Florida markets have seen “unprecedented activity in the luxury sector”, says Durkin of Douglas Elliman. “Tax reform has driven many high-net-worth buyers to our market, which has created a snowball effect, and Covid-19 has accelerated the drivers to Florida.”

Beyond the continental borders of the US has also seen a huge impact from Covid-19, with Hawaiian properties seeing strong demand. Brady says that during lockdown, people were actually buying homes unseen, and as soon as borders reopened there was a rush of activity, with the last quarter sales balancing out the lockdown to create a strong overall year.

“We saw a lot of people who had vacationed in Hawaii, now buying to spend more time there, and then people who had already owned a property, upgrading and purchasing a more aspirational home,” Brady says.

Explore how the past year has upended previous trends and how prices have fluctuated across the US since 2008 in our interactive:

Anne Hogan Perry, a broker for Compass in Hawaii, says that the major shift on the island has been the absence of buyers from the rest of the world, including the usually strong markets of East Asia and Oceania. But that has been offset out by a surge in demand from the US mainland.

Covid-19 has seen a softening in the vertical condo market with higher concentrations of people and communal spaces, towards the seclusion and safety of gated residential communities.

Hogan Perry said that the desire for isolation, safety and focus of lifestyle meant that Hawaii, separate from the rest of the country, has been very appealing for many who see it as a “paradise bubble or safer haven than the continental US”.  But even when lockdown does ease, Hogan Perry doesn’t think Covid-19’s effect on the Hawaii luxury market will dwindle.

“The continued uncertainty of what our world will look like is combined with the absolute total shock of how quickly our lives changed in less than a month in 2020,” she says. “The concept of never going into an office again is making people consider alternative places to live with focus on lifestyle, so why not Hawaii?”

Already city markets are seeing recovery as vaccination progresses, with condos and city-centre properties seeing upticks in sales. But many of the lifestyle shifts caused by Covid-19 won’t fade, whether that be a prioritisation of well-being and connection to nature, more time spent at home and with family, and a reevaluation of what matters most.

“The thought of what people can do with their lifestyle is making them create lifelong change today that you know is going to be perpetual,” says Brady. “People are realising what’s important to them and where they want to live. If they could be anywhere, where do they want to be?”

Topics in this article: Construction, Demographics

Katharine Swindells is a data reporter for New Statesman Media Group.
Websites in our network