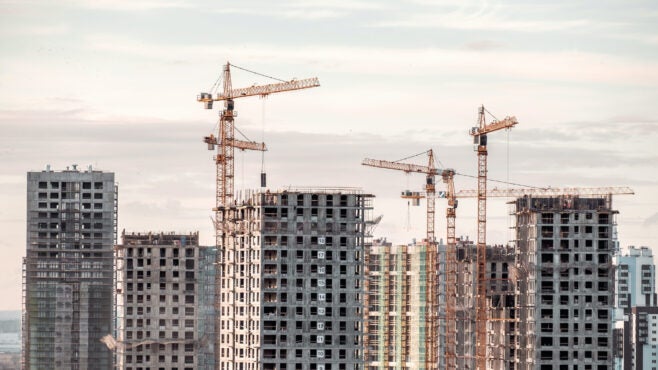 Building crane and buildings under construction against evening sky. (Photo by Iurii Stepanov)

Following months of intense stress, the global construction industry appears to be on the mend. According to Reporterlinker’s Construction Global Market Report 2021, the market is expected to grow from a value of $11.5trn in 2020 to $12.5trn in 2021. Reportlinker attributes this to companies reorganising their operations and starting to recover from the impact of the Covid-19 pandemic.

This is welcome news given the construction industry’s importance within the investment landscape, and also because it employs more than 100 million people worldwide. With this in mind, Investment Monitor looked at the leading subsidiary locations for the world’s top construction companies.

One-tenth of the top global companies are in construction

The Monitor Network’s multinational companies database contains information on 2,190 of the world’s top multinational companies (MNCs) by revenue. Of these companies, 201 are in the construction industry, representing 9.2% of all companies. It is the third most popular industry of the companies analysed, topped only by financial services (20.6%), and technology, communications and electronics (15.5%).

The US is the top destination for construction subsidiaries

The leading destination region for construction subsidiaries is North America, with 16,840 entities, followed by western Europe (9,108) and Asia-Pacific (8,868).

The US was by far the most popular destination country with more than 16,000 subsidiaries registered, representing 43.5% of construction subsidiaries overall. Construction is a major contributor to the US economy, accounting for 4.1% of the country’s GDP in 2019, according to Statista. In addition, the industry employed more than nine million production workers in 2019.

China ranks second with 4,431 subsidiaries. China is a manufacturing powerhouse, and its building market constitutes 20% of all global construction investment, making it the largest in the world by this measure, according to Mordor Intelligence. The country’s construction industry also appears to be one of the quickest to bounce back following the onset of Covid-19. By mid-March 2020, 89.1% of major infrastructure projects had been resumed in a bid to alleviate the economic impact of the pandemic.

The UK is the top European destination for construction subsidiaries, with 3,321 entities established. Construction is one of the largest sectors of the UK economy. According to figures from the Office of National Statistics, the value of new construction work in the UK hit a record high of £119bn in 2019.

France-based Vinci is the top company by number of subsidiaries out of all 2,190 companies included in the database, with 2,659. Approximately 75% of Vinci’s subsidiaries are in western Europe, followed by the Central and Eastern Europe and Commonwealth of Independent States region (142 subsidiaries) and Asia-Pacific (139).

US-based companies dominate the rest of the top ten with Ventas, Welltower, Healthpeak Properties, Equity Residential and Omega Healthcare Investors taking positions two to six. Overall, the subsidiaries established by these top ten construction companies account for approximately one-third of the total number set up by the 201 construction MNCs analysed.

Canada is the only country in the top ten leading subsidiary destinations where more entities were established by foreign than domestic companies. In fact, just four of Canada’s 837 construction subsidiaries were set up by local companies.

Unsurprisingly, in countries with very low rates of taxation, there are substantially more foreign than domestic subsidiaries. Multiple low-tax jurisdictions, including the Cayman Islands, the British Virgin Islands and Monaco, have no registered domestic subsidiaries despite recording sizable numbers of foreign entities.

As the construction industry starts to recover from the worst of the Covid-19 pandemic, it remains to be seen what impact this will have on subsidiary destination selection. Given the contrast in infection rates, lockdown measures and vaccine coverage from country to country, construction companies may have second thoughts before setting up operations overseas and stick with the domestic market they know best.

@LinkedIn
Naomi Davies is an FDI consultant at Investment Monitor, with expertise in location benchmarking and cross-border investment. She joined the team after more than five years at fDi Intelligence, a specialist division of the Financial Times. Naomi is the former head of research for fDi Rankings, a series of reports held within fDi Magazine regarding the competitiveness of global locations. Prior to this, she worked as a senior investment analyst and researcher for fDi Markets, the division’s greenfield cross-border investment monitor.
Websites in our network