Just give people money. It’s an idea that has been gaining momentum in recent years, suggesting that governments can address economic inequality by offering direct cash payments or a basic income to their citizens.

As the Covid-19 pandemic rages around the world and governments struggle to tailor economic policies in response, this bold idea for expanding social welfare is getting a much closer look. A variety of experiments are underway to learn more about its effects on people and economies, and research increasingly indicates that when cash is available to people who need it, they spend it well. 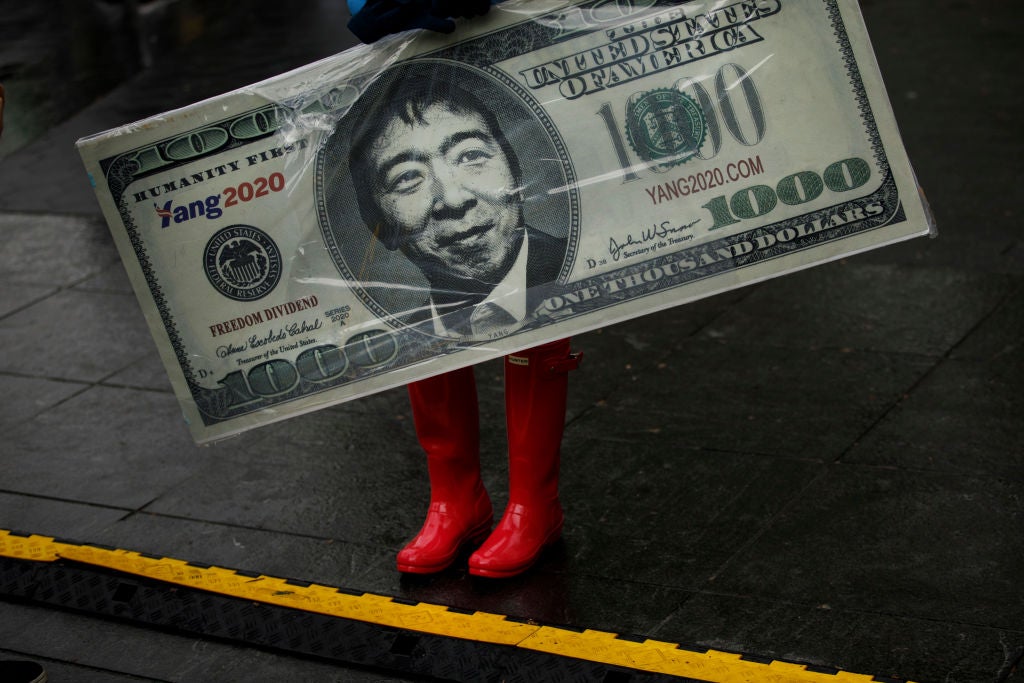 The policies to make it happen can take different forms. There’s universal basic income, which the former US Democratic presidential candidate Andrew Yang helped popularise with his proposal to send every American $1,000 a month. There are smaller versions, too, like a pandemic-era poverty relief initiative in Brazil and experiments in rural Kenya to help the country’s poorest.

A common theme behind these efforts is that they can address the fact that a changing economy is leaving increasingly more people behind. Wages have been fairly stagnant throughout the developed world since the 1970s, even as productivity has soared and the top 10% of the population has reaped most of the reward. Advocates of guaranteed income see their policy as a means to supplement meager wages while allowing families to escape deep poverty, and some local governments are piloting projects to study the potential risks and rewards. Some proponents even hope that it could be a substitute for scarce jobs in the distant future.

The different types of cash payments

There’s a wide variety of experiments and proposals for basic income, and it can get confusing quickly. Here are some key distinctions to understand:

Examples of guaranteed income have been proliferating for years at the city level in places such as Stockton, California, and Maricá, Brazil, where checks are sent to a select group of recipients over a period of years. Many of these schemes were funded by philanthropic organisations, such as Give Directly, because municipalities generally don’t have the money to afford it on their own.

Unconditional cash transfers are noteworthy because conditional cash transfers are much more common: Brazil and Mexico, for example, pay low-income residents if their children regularly attend school or go to the dentist. Other examples include one-time economic stimulus payments like the US sent to its citizens when the pandemic hit, or the annual checks that Alaska sends its residents as a dividend from a state savings fund that is tied to oil revenues. These don’t provide enough money to be considered a universal basic income, but they also don’t come with restrictions or oversight.

Why cities are trying basic income

Cities have been at the forefront of experimenting with guaranteed income because that is where politicians are most motivated to find innovative answers to income and wealth inequality.

“The basic issue is that schooling, rent and healthcare have been growing more costly, especially in cities, and wages are stagnant,” says Jonathan Morduch, a professor of public policy and economics at the Wagner School of Public Service at New York University. “[Guaranteed-income experiments] are allied with things like the pushes for raising the minimum wage, which has also been city based. You have a bunch of mayors who are motivated to try and give citizens a fair shot. It’s happening in cities because that’s where the political momentum is.”

Most cities do not have the funds to support a full-scale guaranteed-income program, and even the costs of experimenting with the policy have stoked some controversy. The group Mayors for a Guaranteed Income has announced an array of new studies during the pandemic, but most are being funded through philanthropic dollars, and some, like Philadelphia’s program, have been canceled for budgetary reasons. Stockton, California, was one of the first American cities to experiment with a basic-income programme. (Photo by Justin Sullivan/Getty Images)

Cities have also served as laboratories for conditional cash transfers. In 2006, for example, then-New York City Mayor Michael Bloomberg launched the $40m Opportunity NYC programme. This policy was funded by philanthropy and based on Mexico’s Oportunidades programme. It offered conditional cash payments to low-income families if they hit certain metrics – $100 for a dental visit, for example, or $150 a month for maintaining steady employment. The Bloomberg administration ended up canceling its programme, saying its effects weren’t as transformative as had been hoped. This kind of conditional aid has its critics: it’s sometimes viewed as patronising and paternalistic.

The current generation of guaranteed-income programmes stands in contrast to this model. Guaranteed-income proponents also see their proposals as an antidote to heavily regulated programmes that place strict limits on what the money can be used for. Instead, more-recent efforts prioritise flexibility: recipients know what they need, and policing their spending habits can stand in the way of their ability to get it. The results of guaranteed-income projects thus far support that contention, although much of the data is still limited.

In 2014, the World Bank reported that a growing number of studies refute a common argument against cash transfers of all kinds: that recipients spend that money on vices rather than needs. “[C]oncerns about the use of cash transfers for alcohol and tobacco consumption are unfounded,” a working paper concluded. Findings from a few specific examples back that up as well.

In Alaska, the government distributes a yearly payment to residents from the state’s Permanent Fund Corp, which invests royalties from oil and gas revenue and then pays out dividends to state residents. A survey found that 72% of recipients used that money for basic needs or to pay down debt.

Stockton, California, has been piloting its guaranteed-income experiment since 2019, offering a group of poor residents $500 a month. So far, the city has seen that the vast majority of that money is spent on food and other basic necessities. An ongoing experiment in Kenya has, thus far, not shown that participants spend more money on tobacco or alcohol. 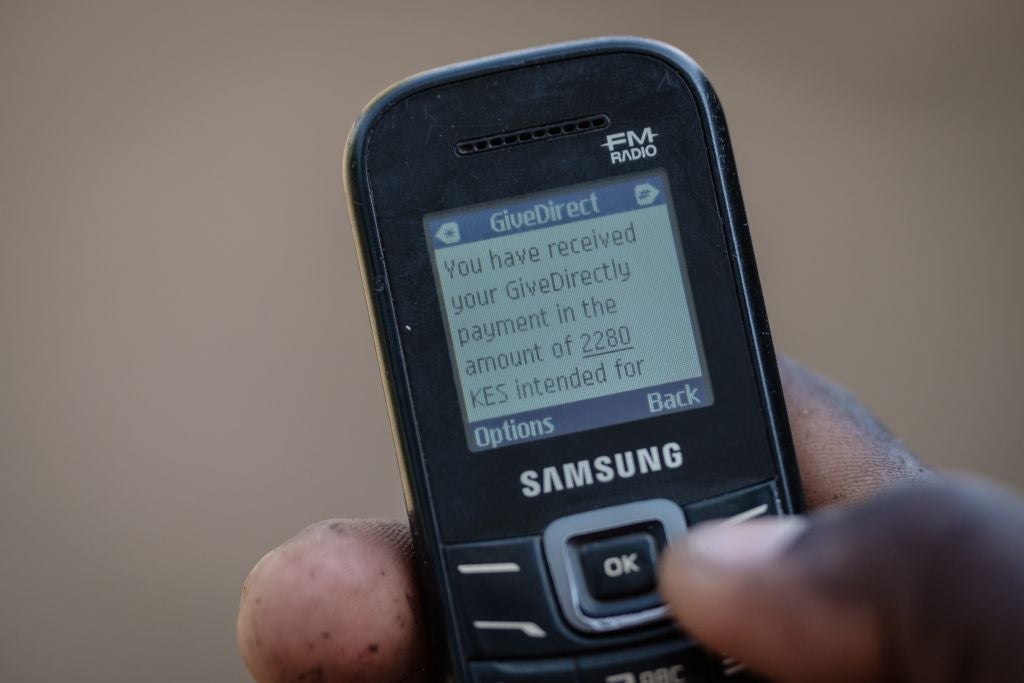 A villager’s mobile phone’s monitor displays a message confirming the basic-income transaction of 2,250 shillings per month (19.5 euros), in the Bondo region of western Kenya. (Photo by Yasuyoshi Chiba/AFP via Getty Images)

The other big concern with basic-income programmes is that they will disincentivise people to seek work. But that largely hasn’t been the case.

However, a 2017-2018 experiment in Finland also showed that basic income may not have a positive effect on unemployment either: participants in that study were not more likely to have a job at the end of it. A round of experiments in the US in the 1970s did find that cash infusions reduced the number of hours worked, although not by a massive amount. (Vox’s Dylan Matthews explains why those results may have been misinterpreted: in part, some people were seeking higher education instead of working as a result of the bonus.)

“There’s been a lot of research over the years on cash transfers of all sorts: lotteries, conditional cash transfers or unconditional programmes,” says Stephen Nuñez, lead researcher on guaranteed income for the Jain Family Institute. “You don’t see an uptick in crime. You don’t see everybody quitting their jobs. There can be some modest decrease in work effort, especially among secondary earners, but it’s nothing like the doom and gloom you might expect.”

The future of basic income

There are still gaping holes in the research about guaranteed income, and that’s why cities and philanthropic organisations are eager to begin new experiments.

In Maricá, Brazil, a quarter of the population is being given a guaranteed income, but in a denomination that can only be spent locally. The idea is meant to allow research that shows exactly how a mass basic income could affect a local economy and what inflationary effects it might have. Other studies are experimenting with the idea of giving recipients a lump payment, like the Alaska Permanent Fund, to see how behaviour changes when the money is allocated all at once instead of in smaller monthly payments. There is also interest in measuring exactly how much money is needed to make a difference in recipients’ lives and whether it matters which member of the family receives the money.

The massive economic dislocation caused by Covid-19 has disrupted several existing guaranteed-income programmes. An array of US cities were on the cusp of rolling out new experiments before the pandemic – in Chicago, Philadelphia, Newark – but now they have to contend with crippling budgetary setbacks borne of the pandemic.

The pandemic has also heightened interest in these ideas as a way to ease the economic hardships of lockdown and recession. In Brazil, the far-right government of Jair Bolsanaro rolled out what amounts to a basic-income scheme to buoy the country’s low-income population – and poverty and inequality have been measurably reduced. (This has also bolstered Bolsonaro’s flagging poll numbers as he stumbles through the public health crisis.) In Spain, the left-coalition government rolled out a basic-income payment system for the country’s poorest in June.

Supporters of the policy believe that the globe-shaking crisis of the pandemic will stoke more experimentation and drive more-sweeping policy change.

“It’s an idea whose time has come,” said Amy Castro Baker, assistant professor of social policy at the University of Pennsylvania, speaking to City Monitor in April. “People never recovered from the Great Recession. Then you’ve got the second economic crisis of the pandemic that pulls back the curtain and shows how unstable we are. If anything, what the pandemic is going to do is accelerate momentum for more of these experiments.”