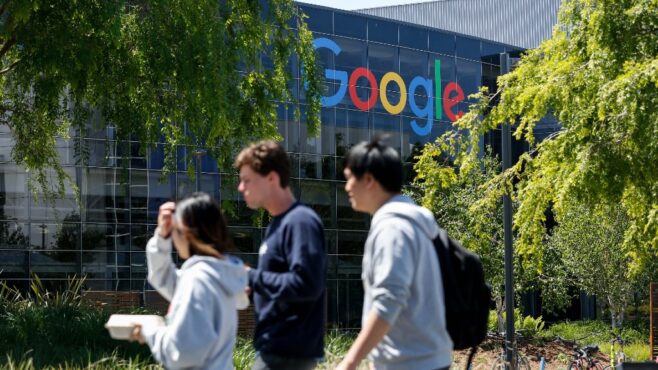 Employees at Google’s Mountain View, California, campus in May 2019. This summer, Google announced that it would allow employees to work from home through at least July of 2021. (Photo by Amy Osborne/Getty Images)

Augustina Sanchez found out from a letter in the mail that she was out of a job. On 5 September, she learned she had been laid off from her position in the kitchen at Verizon Media’s offices in Sunnyvale, California, where she had worked for the past 12 years.

“I was very worried in that moment, more than anything because I used the money I made there to cover most of my expenses,” she says. “It didn’t cover everything, but it covered the majority.”

Sanchez, a single mother, was one of 91 subcontracted cafeteria workers laid off with one week’s notice. With the onset of the pandemic, the company shut down the office and moved its employees to primarily remote work, meaning Sanchez’s job in the cafeteria was no longer needed. For the first few months, Verizon Media, which owns Yahoo and AOL, kept its cafeteria staff on but changed course in September.

“Many of my co-workers are worried about having lost health insurance,” Sanchez says. “They’re older and have illnesses and don’t know what they’ll do.”

Compounding these fears is the tech industry’s growing embrace of remote work for the long haul. Verizon Media is one of several Silicon Valley companies working remotely for the foreseeable future. Google has committed to allowing its employees to work from home at least through July 2021. Twitter went a step further by announcing an indefinite work-from-home policy for its employees. Similar announcements from Dropbox, Microsoft, Facebook, Slack and more quickly followed.

For the wide array of subcontracted service workers who support the tech industry’s corporate campuses – including janitors, shuttle drivers, security guards and kitchen staff – this prospect brings even more uncertainty to an already fraught economic landscape. Their work can’t be done remotely, putting them at greater risk of infection during the pandemic. As companies stay remote for health reasons, there is much less demand for service work overall, raising fears that these jobs will be cut. And if employees never return to offices in the same numbers, many of those service roles may not return at all when the pandemic is over.

“For the most part, companies are doing the right thing,” says Sarah McDermott, political director of Unite Here, a union representing food service workers. “They have said that service workers are a part of their campus and their community, so it’s important for them to keep being paid.”

This has led to some creative solutions. Some companies have repurposed their cafeteria service to offer employees grab-and-go dinners instead of in-person lunches. Facebook has offered cafeteria workers continued culinary training while they’re at home. Google has offered some of its contracted workers ESL classes. But as the pandemic wears on, union representatives say they fear these efforts may no longer be sustainable.

The possibility of lost jobs is energising efforts to organise on behalf of the service workers. For now, the main priority for unions and other advocacy groups is that workers’ basic needs are met: that they remain employed and have access to amenities like PPE and paid sick leave so they can do their work safely.

“These low-wage essential workers, or workers who are most likely to face layoffs, are the same communities that have experienced the highest rates of illness,” says Jeffrey Buchanan, policy director for Silicon Valley Rising, an organisation that advocates for liveable wages, good working conditions and affordable housing for working-class residents in the Bay Area. “You have this perfect storm of overlapping demographics, and it all overlays onto the same couple of zip codes in Silicon Valley.”

As a group, Silicon Valley’s service workers have been in a precarious position for a long time, and in many ways their situation is an amplified version of what’s happening across the US. While the booming tech industry has been a focal point of the economic story in the years since the Great Recession, so too is the growth of lower-wage jobs. Most positions lost in the US between 2007 and 2009 were in mid- to high-wage industries, but low-wage roles made up the majority of the recovery.

The result has been a growing class of the working poor – people who are employed but don’t have enough wages or hours to adequately cover their needs. Last year, the median wage for a janitor in California was $19.61 per hour, or roughly $40,000 per year. The minimum income needed to rent a one-bedroom apartment in San Jose, the heart of Silicon Valley, was more than twice that. In that city, food prep and serving-related occupations are the second-lowest-paying jobs, with a median hourly wage of $14.46. Computer and mathematical occupations, on the other hand, are the third-highest-paying positions, with a median hourly wage of $62.55. Tech workers are making more than four times as much as the food workers who serve them lunch.

Low-wage service roles are also more volatile and more exposed to the pandemic economy. Positions in the food service and information technology sectors grew at roughly the same pace in San Jose for years until an explosion of new tech jobs began in 2017. When the pandemic began, food service work dropped sharply: such roles fell 50% from March to April 2020, compared with a 9% drop in IT positions. By September, San Jose’s food service positions were down 36% over the year before, while IT jobs were down 11%.

Labour organisers in California have been pushing for legislation intended to protect service workers when their jobs return.

In April, Los Angeles passed a Right of Recall ordinance that requires employers to offer work to laid-off workers when rehiring. The move is aimed at protecting the jobs of janitorial, maintenance and security employees at airports, hotels and commercial properties. Under the ordinance, when jobs return, laid-off workers are first in line to be offered the same or equivalent position they previously had, at the same pay level and with the same benefits, and rehiring offers must be based on seniority. Similar measures were adopted in Oakland and San Francisco in July. The California Legislature passed a similar statewide bill, but it was vetoed by Governor Gavin Newsom in September.

These pressures represent a changing dynamic between cities and the booming tech economy. Many have framed their success in the 21st century by their ability to attract such companies and their highly paid workers. Indeed, many tech companies have continued to see booming profits throughout the pandemic, and their employees have had relative job stability despite the economic shock. But low-wage workers haven’t shared in the bounty: in the US, these workers are disproportionately immigrants, women and people of colour who face unlivable wages, underemployment and unaffordable housing. 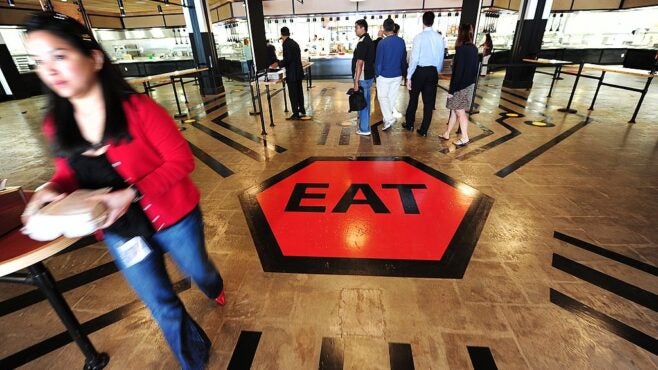 Employees get lunch, in the pre-pandemic era, in the cafeteria at the Facebook main campus in Menlo Park, California. (Photo by Robyn Beck/AFP/GettyImages)

This dynamic prompted meaningful change in some places during the recovery from the Great Recession, when movements to support service workers rippled through large, expensive US cities to increase the minimum wage to $15 per hour. This was achieved first in Seattle in 2014, and other cities followed, including San Francisco, San Jose and other municipalities in the Bay Area. The majority of cities in that region now have a minimum hourly wage of at least $14. For Seattle’s large employers, including Microsoft and Amazon, it’s $16 per hour. Microsoft, Amazon and Expedia all committed early on to continuing to pay their hourly workers in their Seattle offices as they transitioned to work-from-home policies.

On the other side are cities that have much lower minimum wages and fewer protections overall for workers. Austin, Texas, a city with its own notable tech boom, uses the federal minimum wage of $7.25 per hour – a figure that falls far below the city’s living wage, which is at least $11.76 for a single adult with no children. The state’s right-to-work laws mean low-wage workers are also less likely to be unionised. Two years ago, the Austin City Council passed an ordinance mandating paid sick leave – a measure that would have benefited “essential workers”, especially those in low-wage service jobs – but it was almost immediately blocked in court.

These unequal fortunes have fed a movement that’s challenging the wisdom of luring major tech employers, perhaps exemplified most notably by the successful effort to resist Amazon’s proposed HQ2 in Queens, New York. If tech companies embrace remote work for the long term, it may further call into question how much cities will benefit by competing for this kind of presence.

“I think [Big Tech] was better for cities pre-Covid,” says Mark Muro, policy director at the Brookings Institution’s Metropolitan Policy Program. “There were some studies showing that a significant tech sector has spillover benefits for at least non-college-educated working people, but it never did much for the truly poor. Now it’s less clear that tech’s spillover benefits do reach even middle-skilled workers.”

Cities still have opportunities to engage with large technology companies as equal players with their own leverage instead of seeing such entities – or any major ones, for that matter – as golden geese to be won.

“Cities sometimes forget that they have land use powers, that they don’t have to hand out subsidies and that they can take steps to compel employment and training of a local workforce and even diversity targets,” Muro says.

That’s part of the work Silicon Valley Rising has been doing in recent years. Since the pandemic began, the group has redoubled its housing security efforts alongside Santa Clara County, which in March started a rent assistance program that was funded in part by Cisco. That initial fund of $11 million was used up within three days, but a series of private-public partnerships under an initiative called #SiliconValleyStrong continue offering support to low-income residents throughout the county. (The San Jose metropolitan area ranked as the 15th least housing-secure metro area in the US in City Monitor’s 2020 US Housing Security Index. The neighbouring San Francisco metropolitan area ranked tenth.)

When Google announced plans in 2017 to build a new campus in downtown San Jose, Silicon Valley Rising began work with the city to push the company to agree to a community benefits plan, which includes commitments to fund affordable housing, living-wage jobs and support for education. The plan has been incorporated into negotiations between the city and Google, which are ongoing.

No matter where their locations and employees remain after the pandemic, physical offices will no doubt need service workers to support them. Janitorial work, for example, has taken on new importance with widespread efforts to sanitise workspaces to prevent the spread of coronavirus.

“The pandemic has taught us so much about what clean really means,” says Denise Solis, executive vice-president of SEIU-USWW, a union that represents 45,000 janitorial and security workers in California, including many at tech campuses. “Clients are saying, ‘I want my space extra-clean, but I have less occupancy,’” and as a result are asking for discounts on janitorial services.

The union has pushed back, saying that the job now requires more specialised training. In doing this work, janitors are also at increased risk of catching coronavirus. Solis knows of several who have died of Covid-19.

“Being a janitor now, there are so many more responsibilities added to this work,” she says.