When the coronavirus spread around the world this spring, government-issued stay-at-home orders essentially forced a global social experiment on remote work. 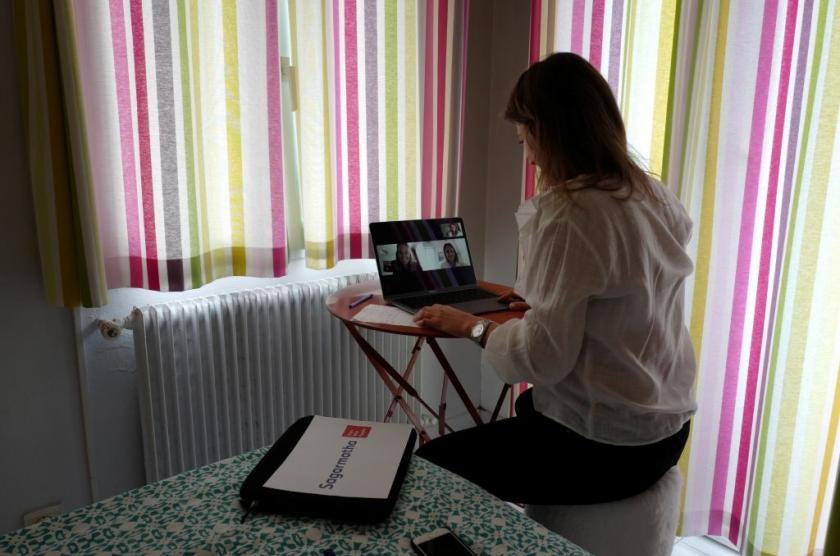 There’s a wide world of speculation about the long-lasting changes to real estate caused by the coronavirus. (Photo by Valery Hache/AFP via Getty Images)

Perhaps not surprisingly, people who are able to work from home generally like doing so. A recent survey from iOmetrics and Global Workplace Analytics on the work-from-home experience found that 68% of the 2,865 responses said they were “very successful working from home”, 76% want to continue working from home at least one day a week, and 16% don’t want to return to the office at all.

It’s not just employees who have gained this appreciation for remote work – several companies are acknowledging benefits from it as well. On 11 June, the workplace chat company Slack joined the growing number of companies that will allow employees to work from home even after the pandemic. “Most employees will have the option to work remotely on a permanent basis if they choose,” Slack said in a public statement, “and we will begin to increasingly hire employees who are permanently remote.”

This type of declaration has been echoing through workspaces since Twitter made its announcement on 12 May, particularly in the tech sector. Since then, companies including Coinbase, Square, Shopify and Upwork have taken the same steps.

Remote work is much more accessible to white and higher-wage workers in tech, finance and business services sectors, according to the Economic Policy Institute, and the concentration of these jobs in some major cities has contributed to ballooning housing costs in those markets. Much of the workforce that can work remotely is also more able to afford moving than those on lower incomes working in the hospitality or retail sectors. If they choose not to report back to HQ in San Francisco or New York City, for example, that could potentially have an effect on the white-hot rental and real estate markets in those and other cities.

Data from Zumper, an online apartment rental platform, suggests that some of the priciest rental markets in the US have already started to soften. In June, rent prices for San Francisco’s one- and two-bedroom apartments dropped more than 9% compared with one year before, according to the company’s monthly rent report. The figures were similar in nearby Silicon Valley hotspots of San Jose, Mountain View and Palo Alto.

Six of the 10 highest-rent cities in the US posted year-over-year declines, including New York, Los Angeles and Seattle. At the same time, rents increased in some cheaper cities that aren’t far from expensive ones: “In our top markets, while Boston and San Francisco rents were on the decline, Providence and Sacramento prices were both up around 5% last month,” Zumper reports.

In San Francisco, some property owners have begun offering a month or more of free rent to attract new tenants, KQED reports, and an April survey from the San Francisco Apartment Association showed 16% of rental housing providers had residents break a lease or unexpectedly give a 30-day notice to vacate.

It’s still too early to say how much of this movement can be attributed to remote work, layoffs or pay cuts, but some who see this time as an opportunity to move are taking it.

Jay Streets, who owns a two-unit house in San Francisco, says he recently had tenants give notice and move to Kentucky this spring.

“He worked for Google, she worked for another tech company,” Streets says. “When Covid happened, they were on vacation in Palm Springs, and they didn’t come back.”

The couple kept the lease on their $4,500 two-bedroom apartment until Google announced its employees would be working from home for the rest of the year, at which point they officially moved out. “They couldn’t justify paying rent on an apartment they didn’t need,” Streets says.

In early June, Yessika Patapoff and her husband moved from San Francisco’s Lower Haight neighbourhood to Tiburon, a charming town north of the city. Patapoff is an attorney who’s been unemployed since before Covid-19 hit, and her husband is working from home. She says her husband’s employer has been flexible about working from home but it is not currently a permanent situation. While they’re paying a similar price for housing, they now have more space and no plans to move back.

“My husband and I were already growing tired of the city before Covid,” Patapoff says.

Similar stories have emerged in the UK, where real estate markets almost completely stopped for 50 days during lockdown, causing a rush of demand when it reopened. “Enquiry activity has been extraordinary,” Damian Gray, head of Knight Frank’s Oxford office told World Property Journal. “I’ve never been contacted by so many people that want to live outside London.”

Several estate agencies in London have reported a rush for properties since the market opened back up, particularly for more-spacious properties with outdoor space. However, Mansion Global noted this is likely due to pent-up demand from 50 days of almost complete real-estate shutdown, so it’s hard to tell whether that trend will continue.

There’s a wide world of speculation about the long-lasting changes to real estate caused by the coronavirus, but many industry experts say there will indeed be change.

In May, the New York Times reported that three of New York City’s largest commercial tenants – Barclays, JPMorgan Chase and Morgan Stanley – have hinted that many of their employees likely won’t be returning to the office at the level they were pre-Covid.

Until workers are able to safely return to offices, it’s impossible to tell exactly how much office space will stay vacant post-pandemic. On one hand, businesses could require more space to account for physical distancing; on the other hand, they could embrace remote working permanently or find some middle ground that brings fewer people into the office on a daily basis.

Those who do return to the office may find a reversal of recent design trends that favoured open, airy layouts with desks clustered tightly together. “The space per employee, likely to go up, would counterbalance the folks who are no longer coming into the office,” Knakal says.

There has been some discussion of using newly vacant office space for residential needs, and while that’s appealing to housing advocates in cities that sorely need more housing, Bill Rudin, CEO of Rudin Management Co, recently told Spectrum News that the conversion process may be too difficult to be practical.

“I don’t know the amount of buildings out there that could be adapted,” he said. “It’s very complicated and expensive.”

While there’s been tumult in San Francisco’s rental scene, housing developers appear to still be moving forward with their plans, says Dan Sider, director of executive programs at the SF Planning Department.

“Despite the doom and gloom that we all read about daily, our office continues to see interest from the development community – particularly larger, more established developers – in both moving ahead with existing applications and in submitting new applications for large projects,” he says.

How demand for those projects might change and what it might do to improve affordable housing is still unknown, though “demand will recover”, Sider predicts.