“Flyskam” – the Swedish word for “flight shame” – describes a phenomenon that has taken off around the world, as travellers face growing pressure to reduce their carbon emissions by switching to alternative modes of transport. Climate activists have denounced air travel, settling for boats, trains or, at a pinch, paying to offset the carbon emissions from their flights. Celebrities face criticism for flying by private jet – and Germany’s Green Party has even put forward plans to ban domestic flights within the country.

To see whether the efforts of individuals to cut down on air travel can make a meaningful difference to global emissions, we took a closer look at how fuel consumption by the aviation industry has changed over time, and what trends are set to take hold in the future.

A common way of estimating CO₂ emissions for individual passengers is to take the aircraft type and distance travelled into account. This is the method used by carbon offsetting organisation atmosfair, and the International Civil Aviation Organisation’s carbon footprint calculator.

By contrast, our approach to quantifying CO₂ emissions from flights involves looking at the consumption of aviation fuel. This eliminates the need to rely on estimates of passenger numbers, aircraft type and how full or empty planes are, and can easily be compared to other means of transportation.

An important caveat is that our method ignores the effects of condensation trails or nitrogen oxides (NOx) emitted by planes. Including these in the estimates is challenging because their effects only last for a matter of minutes, hours or days. But research suggests that the warming effects of aviation can be much larger, depending on where in the atmosphere NOx are emitted. So our approach only gives a conservative estimate of the emissions from aviation. 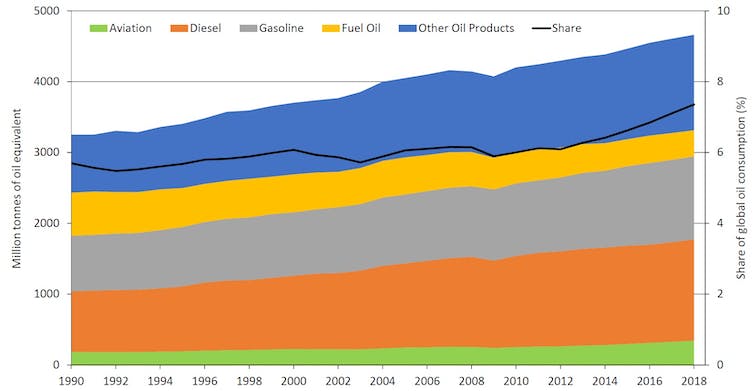 The figure above shows global oil consumption, measured in million tonnes of oil equivalent (mtoe). Over the past 30 years oil consumption has risen continuously, amounting to a 50 per cent increase since 1990. Over the same period consumption of aviation fuel almost doubled from 185 mtoe to 343 mtoe.

Compared to other means of transportation, such as road and rail, aviation accounts for a relatively small but growing percentage of oil consumption. In 2018, aviation was a major driver of the 1.2 per cent global increase in oil consumption. 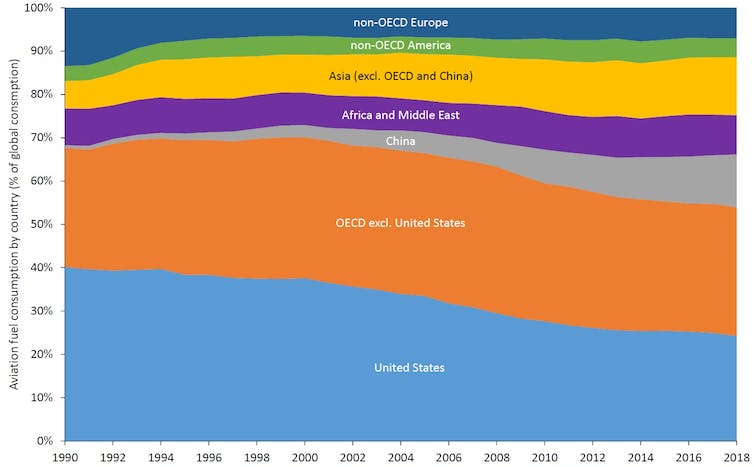 Meanwhile, China, Russia and non-OECD countries in Europe and Asia, which account for almost 60 per cent of world population, consumed 32 per cent of all aviation fuels. Given that the populations of these countries are forecast to grow, we can expect air travel passenger numbers to increase. In fact the International Air Transport Association estimates that China will replace the US as the biggest aviation market by the mid-2020s.

To put things into perspective, if China, Russia, non-OECD Europe and the rest of Asia were to fly as much as the OECD countries, total aviation fuel consumption would almost triple from its current level of 343 mtoe to about 935 mtoe. It would further increase to 1,560 mtoe, if the entire world flew as much as OECD countries. This amounts to more than the current global consumption of gasoline and diesel.

It’s worth noting that consumption is normally attributed to the country that represents the “point of sale”: for example, if a Norwegian plane refuels in Iceland en route to the US, this counts as Icelandic consumption and emissions. This matters, because any attempts by individual countries to tax aviation fuel would be unlikely to succeed, since planes would simply go out of their way to refuel in low-tax countries, meaning a transnational policy is required.

Since 2000 the number of air passengers has almost tripled, reaching a new high of 4.3 billion in 2018. The main driver of growth is budget airlines, which offer primarily short and medium-haul flights in the American and European markets. 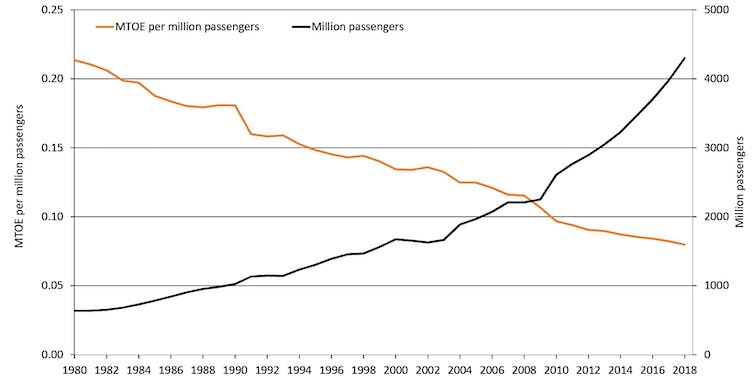 It’s not all bad, though. As shown in the figure above, the amount of fuel required per passenger has decreased steadily over the years, although the rate seems to have slowed after 2010, despite the introduction of more fuel-efficient planes. The IPCC estimates that 18 per cent of CO₂ emissions from planes can be saved, if air traffic control management and other operational procedures become more efficient. 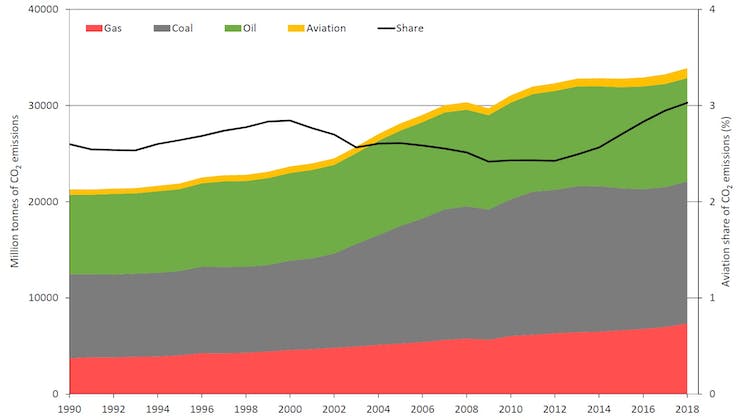 CO₂ emissions by fuel type. Emissions on the left axis and contribution of aviation to global emissions (in %) on the right axis. Image: Jan Ditzen/author provided.

But the fact remains that alternative means of travel, especially trains, have a much better carbon footprint than flying. The London North Eastern Railway estimates that it takes about 17kg of CO₂ per passenger to travel from Edinburgh to London, which equates to heating the average UK home for two days. Atmosfair estimates the same journey by plane would produce 145kg of CO₂ – equivalent to heating a home for 22 days.

In wealthy nations across the Western world, where people can choose to take alternative transport over short and medium distances at little to no extra cost, “flyskam” may well have its place. But when it comes to tackling climate change, flying less is small piece in a big puzzle.