The seas will continue to rise for 300 years. That’s the conclusion of a new study, published in Nature Communications, which projects how much the sea level will rise under varying degrees of success in tackling climate change right up to the year 2300.

But 2300 is almost three centuries from now. Three centuries ago the industrial revolution hadn’t even started. This raises the question of whether, when considering present-day climate policy, there is any value at all in considering such distant futures.

After all, the Paris Agreement on climate change hasn’t set its global temperature rise targets beyond the end of the current century. And even this appears too remote a horizon to motivate emissions cuts in the near future. Therefore, Paris focuses on five-year climate policy cycles starting in 2018, which are more in line with typical political and business cycles, and in tune with our everyday concerns.

Nonetheless, multiple climate studies do consider projections of the far future. For instance, one paper estimated that, if we fail to tackle climate change, the Arctic Ocean could be ice-free all year round somewhere between 2150 and 2250. Another study looked at carbon emissions from thawing permafrost as far out as the year 2500.

The obvious criticism is that such work is mere fiction, driven by the intellectual curiosity of a small group of highly specialised scientists, rather than anything relevant to daily life. And in any case, critics might argue, won’t we figure something out in the next century or two that could tackle climate change and prove all the predictions of doom and gloom unfounded?

Emissions will still be linked to the economy

As is often the case, the truth is a little bit more complex.

The first thing to note is that a certain amount of climate change is already “locked in”. Our use of energy and other resources is not going to slow down any time soon, as poorer countries race to industrialise and catch up with the global leaders, while more affluent nations aim to maintain and further improve their living standards. Most people can relate to these aspirations, even if the upshot is they ensure that global emissions stay at their current high levels.

Solar and wind power will of course help, but the reality is that such technologies are still nowhere near enough to radically alter the link between emissions and economic expansion. Despite the renewables boom, 2017 saw a 2 per cent rise in global emissions following a three-year plateau. Experts argue that making serious emissions cuts will require much more ambitious efforts across nearly all economic activities, including energy, urbanisation, infrastructure, transport, heavy industries and land use.

We can predict future growth

This brings us back to the very long-term scenarios used by climate scientists. These scenarios are actually based on credible assumptions about a large set of long-term socio-economic and technological drivers that define contrasting futures for the world as a whole. And it turns out that things which will affect future emissions and climate, like the rates of technological progress, or population and wealth growth, are likely going to be constrained within a reasonably predictable range. Even if one includes the possibility of “game-changing technologies”, for example a hypothetical new generation of much cheaper and more effective batteries for electric cars, the world is almost certainly going to stay within this range of scenarios.

This is where climate science comes into play. As certain physical processes triggered by global warming are relatively slow, their full impact won’t be apparent for hundreds of years. Consider the ice sheets found in Greenland and Antarctica, for instance, both so big that they respond to climate change only slowly. However, once triggered, and the ice starts sliding towards the oceans, causing the sea level to rise, the melting process takes centuries to reverse. Something similar is happening with thawing permafrost, which releases additional greenhouse gases into the atmosphere.

Both rising sea levels and thawing permafrost could impact hundreds of millions of people, particularly those living in coastal areas or hotter climates. But if we want to know how much we should be worried, then climate predictions up until 2050 won’t cut it – the world may still be warming at that point, even if we stopped emitting carbon overnight. Given the future of the world is bound within a reasonably predictable range of scenarios, it therefore makes sense to estimate the risks posed by these slow physical processes, by extending the analysis as far out as 2300. 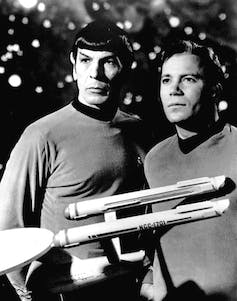 I believe it’s a ‘climate agreement’, captain. They were popular in the 21st century. Image: NBC.

Back to the original study. Its main result was that the sea level could still rise by up to 1.2 metres (4ft) by 2300 even under a very optimistic climate scenario where the global temperature never rises more than 2℃ above pre-industrial levels. That is, even if manmade emissions peak within the next two decades, then drop down to zero no later than by 2070 and remain at zero from then onwards – sea levels would still rise by more than a metre.

Achieving zero net emissions within the next 30 to 50 years will be hard enough. But the study shows that even if this ambitious target is achieved, sea levels will continue to rise for the following two centuries. This is a climate time bomb for coastal areas. Though it may not seem like a lot, a 1.2-metre sea level rise will still force megacities such as London and New York to spend billions to maintain flood defences in the face of stronger storm surges.

Achieving zero emissions is therefore not enough to prevent the long-term effects of sea level rise from kicking in. To bring temperatures back to at least the current levels – that is around 1℃ above pre-industrial – we’ll need negative emissions technologies that draw carbon directly out of the atmosphere.

This is an important long-term policy result that was made possible by considering extended time horizons. By reaching as far out as 2300, we have reaffirmed the need to take ambitious climate action in the more immediate future.