As a climate scientist of more than 25 years, I’m proud of the work my profession has done in recent decades to alert humanity to the unfolding climate crisis. But as the emergency becomes ever more acute, we scientists need to alter the way we approach it – or face being part of the problem.

Climate science has in large part been a remarkable success story. Swedish physicist Svante Arrhenius accurately calculated how much a doubling of carbon dioxide in the atmosphere would warm the planet as early as 1896.

The 1979 Charney report raised concerns about an impending climate crisis long before we could directly evidence it. In response, the scientific community stepped up its research efforts, and has been conducting regular scientific assessments to build a consensus view, and send a strong message to policy makers to spur them into action.

The problem is that 40 years of these efforts, however well-intentioned, have not had any impact on the carbon course of humanity. Since the middle of the 19th century, CO₂ emissions from human activities have been growing exponentially, on average by 1.65 per cent per year since 1850. 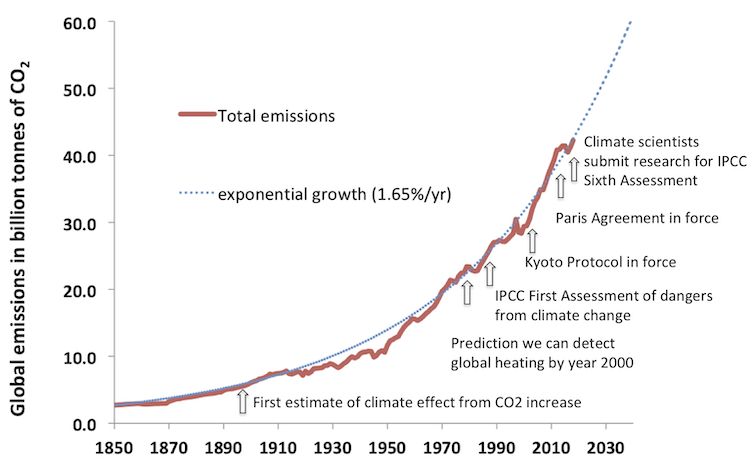 The UN has to date been powerless to stop emissions rising. Image: Wolgang Knorr.

There were times when economic hardships temporarily stalled emissions, such as the oil price shocks of the early 1980s, the collapse of the Soviet block, and the 2008 financial crisis. But these had nothing to do with climate policy.

If we continue this exponential rise for just five more years, we will have already exhausted the carbon allowance that gives us a two-thirds chance of limiting warming to 1.5°C. That’s according to the IPCC, the UN body responsible for communicating the science of climate breakdown. Other scientists estimate that we have already missed the boat.

Our painful sluggishness to act is not the fault of scientists. But the crisis is now more urgent than ever, and our current approach to it is starting to make us part of the problem.

Scientists are by nature conservative. This tendency is intimately linked to the way science operates: before a new theory is accepted it needs to be repeatedly scrutinised to make sure we are absolutely sure it holds up.

Usually, this is good practice. But it has caused climate scientists to consistently underestimate both the speed at which the climate is destabilising, and the severity of the threat it poses.

The IPCC is a chief culprit for this. It has the added difficulty of having to seek ratification from the world’s governments for its summary reports, and has been consistently singled out for underselling the impending crisis.

The scientists across the world that contribute to the body’s reports must heed its track record of mistaken conservatism, and adjust their approach going forward. Uncertainties are of course inherent in modelling how and when the climate will destabilise, but when the stakes are as high as they are, we must operate on the precautionary principle – the normal burden of proof on scientists should be reversed.

At the current level of 1.1℃ of global heating, climate change and ecological breakdown are already displacing and killing hundreds of thousands of humans, and sending other species towards extinction. Above 1.5℃ though, risks to humanity and ecosystems amplify greatly.

Yet the UN’s target for global carbon emissions to reach net zero by 2050 only gives us about a one-in-two chance of limiting global heating to below this level. This target is based on one of multiple potential pathways laid out by IPCC scientists in a special report in 2018.

Professions such as doctors wouldn’t take such a punt on preserving life if better odds were available. Why is the same not true of climate scientists? We need to shift both our own and society’s ideas about what is an acceptable level of risk to offer government leaders, and therefore the living planet’s inhabitants.

Even the above pathways to a half-chance of limiting heating to 1.5℃ rely on unproven technologies to suck carbon dioxide out of the atmosphere in the second half of the century. They also fail to take into account the political landscape in which these models are being applied. Leaders are well aware that the three to four degrees warming we’re headed for may be beyond civilisation’s ability to adapt, and yet are still to make any serious headway in phasing out global fossil fuel subsidies that total at least $100bn a year.

In the face of a genuine existential threat to our civilisation, we scientists need to shift our focus from long-term models that give a false sense of control over the climate crisis and paint drastic emissions cuts as easily achievable.

Instead, we should focus on vulnerability in the here and now. For example, our global food system is already vulnerable to extreme weather events. If drought strikes in several countries at the same time, there are no guarantees that our food supply chains – in which deliveries arrive “just-in-time” to minimise costs – will not experience collapses in the next decade or two.

Yet compared to the vast amount of research focused on the uncertain impacts of global heating on humanity by 2050 and 2100, we know worryingly little about just how fragile our supply chains – or other parts of our highly efficient clockwork global economy – are in the near-term. Refocusing resources on such dramatically under-researched short-term vulnerabilities is vital, not least because it will make the climate and ecological crisis feel more close to home than abstract carbon budgets and temperature rises.

Ultimately, the way the world responds to the impending crisis depends on the extent to which its citizens and leaders feel radical action is necessary. By reframing our research and changing accepted levels of risk and uncertainty, perhaps climate scientists can finally help humanity change its carbon course.