Smart cities are often discussed as being the key to future urban living. The increase in capacity for more complex information can help solve human and environmental problems by saving energy and regulating traffic flow. But a new study has now highlighted the potential of adapting the concept of “smart” for national parks.

Historically, outdoor recreation gained its popularity because of its juxtaposition to urbanisation. Motivations included adventure, simplicity and immersion in “wilderness”, away from human progress. In many cases this is still true: we are often told that greater exposure to green space and natural environments benefits health and well-being.

But how can the so-called “smart” tech improve our relaxing countryside experience? The challenge lies in integrating technology into outdoor recreation while retaining these crucial elements of the experience. Here are some simple smart options for the future ramblers.

The Lake District example suggests that sensors on bins can alert the national park authorities when they are full, which reduces the problem of litter and helps conserve the landscape. Research has shown that these kinds of messages work.

It is also suggested that “smart” car parks will transmit information to motorists when car parks are full. This can reduce carbon emissions by reducing trips to multiple car parks. However, encouraging more travel by public transport and non-motorised modes of transport reduces carbon emissions more effectively. This alternative should be given priority.

Planners and managers of national parks have long seen the need to reduce visitor car use. Aside from decreasing carbon emissions, visual pollution from large numbers of cars in natural areas is a long-standing problem. It takes away from the “natural” and “simple” aesthetics which are so important in attracting visitors.

There is considerable need to encourage car sharing, especially because the infrastructure in rural areas is less resilient to large numbers of cars. Academics are increasingly pointing to the power of new data sharing and smart capability to solve this through measures such as car-sharing apps and better planning for integrated travel.

People who travel to, from and within national parks can do so sustainably with greater confidence if they have reliable information on public transport – as well as walking and cycling options – at their fingertips.

Research on walking tourism in natural settings highlights the growing use of mobile technology as a navigational aid. The internet is increasingly used both to showcase and research walks in national parks. But practitioners urge caution for more adventurous forms of recreation.

Interviews with national park staff revealed that in particular, mountain rescue services can be stretched when hillwalkers rely too much on technology. Navigating solely with a mobile phone or GPS cannot substitute map-reading skills when faced with difficulties. 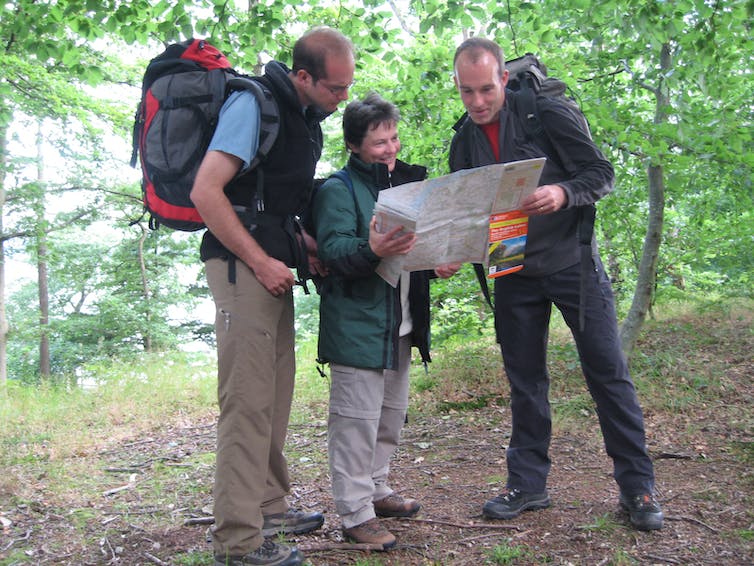 Walking tourists differ in their preference for heavily managed walking routes. Some look for relative simplicity of “wild” surroundings, isolation and solitude. Others prefer abundant directional signs, information and flat, well managed paths. These differences point to an important dichotomy as technology permeates more of the previously “untouched” areas of the world.

Technology is redefining how we engage with the natural environment. Sport England’s research on UK outdoor activity acknowledges a need for connectivity even in the most remote natural areas, and particularly for younger participants. Rapidly improving mobile technology and information capacity epitomise the fast society many live in.

There are clear benefits to integrating smart technology into rural and natural areas. Tourists in particular are a key focal point because of the capability for improving sustainability in national parks. But the wider implications surrounding this development still need to be considered.

National parks should continue to cater for all preferences and preserve some “smart-free” elements, enhancing the experience of those seeking adventure and wilderness. People should also rethink their relationship with nature. If smart technology can help the environment, preserve biodiversity and protect sensitive areas, then it should be considered as an antidote to past human negative effects.